Many ceremonial court dances developed in the kraton palaces of Java. They include ceremonial group dances of male dancers reflecting the influence of ancient martial arts. The most famous are the beksa dances of the kraton of Yogyakarta. They were originally performed by two groups of soldiers of the royal guard, depicting scenes of warfare with a strong military spirit.

The most valued court dances of are bedhaya and serimpi. They are both slow, restrained group dances performed by women to the accompaniment of choral singing and gamelan music, and their traditions are especially linked to the kraton of Yogyakarta and Surakarta in Central Java. 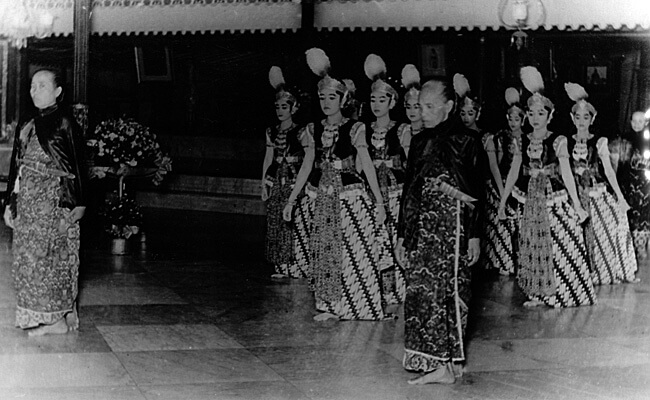 The Bedhaya, laden with deep symbolic or even religious meaning and usually performed by nine dancers, is, along with its many variations, the most sacred of all Javanese court dances. Performances and even rehearsals are restricted to certain places and times. It is usually performed at major court festivities, such as coronations or the sultan’s birthday. The oldest existing form is the bedhaya ketawang, commemorating the bond between Senapati, the first sultan of Mataram (1584–1601) and the mythical Queen of the Southern Sea. 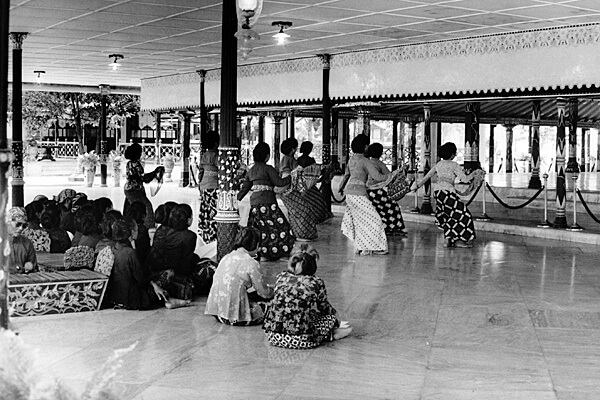 Court dancers rehearsing bedhaya in front of the Golden Hall in the kraton of Yogyakarta in the 1980s Jukka O. Miettinen

It is still preserved as a pusaka, or royal heirloom, in the kraton of Surakarta, and is regularly performed at the kraton of Mangkunegara. Along with the three forms of bedhaya inherited from the ancient Kingdom of Mataram, there are several other bedhaya compositions, most of which were created between the mid-eighteenth century and the middle of the 20th century. Although the bedhaya is basically a monopoly of the kraton, often created by the sultans themselves, it could also be staged by high officials in its less sacred forms. 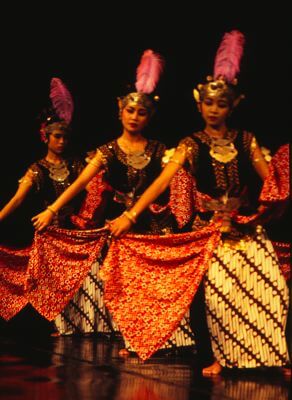 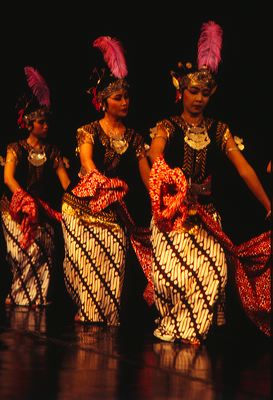 The bedhaya is an extremely slow and solemn dance. The dancers arrive on the scene in an orderly geometric procession formation, carrying the hems of their batik sarongs. Majestic, almost martial, music accompanies them to the scene of the performance, usually a pendopo hall open at the sides, a typical feature of kraton architecture. 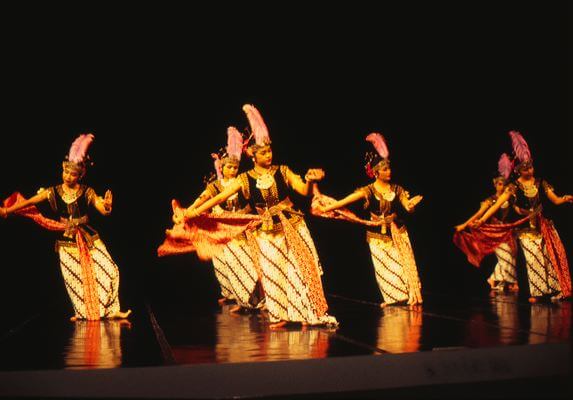 The dancers then kneel down in respect before beginning the actual dance. The footwork is relatively simple, but the grouping of the dancers changes almost unnoticeably, creating ever-newer and increasingly intricate patterns, like pieces on a chessboard. The face is kept strictly expressionless, and the eyes look down, while the dancers undulate to the gamelan music in a continuous flow of movement like underwater plants.

Indian-derived hand gestures are used, but they no longer have any direct symbolic meaning and have become extremely streamlined and decorative dance gestures. In the basic position, the dancers’ knees are bent, making the body S-shaped. This extremely demanding position, sometimes making the dancers collapse and faint, permits, however, flexibility for sharp rises and falls of the body and accentuates the otherwise continuous legato-like movement.

At times, the dancers continue their uninterrupted movement crouching on their knees, and at other times they make sudden, deep asymmetric bends. In the climax the two main dancers separate themselves slightly from the group to begin an extremely stylised battle with their wavy-bladed krises (also keris: dagger), after which the dancers leave the scene in a procession-like formation similar to their entrance.

The bedhaya dancers wear a batik sarong, often decorated with motifs restricted to court use. The upper body is clothed by a tight-fitting dark velvet blouse, and a dance scarf is worn around the waist. This is skilfully manipulated with the tips of the fingers, the controlled handling being an essential part of the choreography. The dancers wear gilt tiaras with large brightly coloured feathers softly following their movements and delicate bends of the head.

The dancers’ bodies are painted in a golden hue, and the eye make-up corresponds to the old court traditions. In the various genres of bedhaya, the even-tempoed music is performed by gamelan ensembles, which were rather small, in the earliest traditions. The text sung by the chorus usually has no direct connection with the dance or the stylised battle enacted by the principal dancers, but only sets the general mood of the performance.

The bedhaya still has a deep religious meaning for both the performers and the spectators. Its aesthetic principles are linked to a non-verbal, esoteric conception of beauty and strength, and the dancing of bedhaya is seen as a kind of yoga or meditation. The nine dancers have been explained as symbolising the eight cardinal points and the centre of the universe, a conception derived from ancient Indian cosmology. 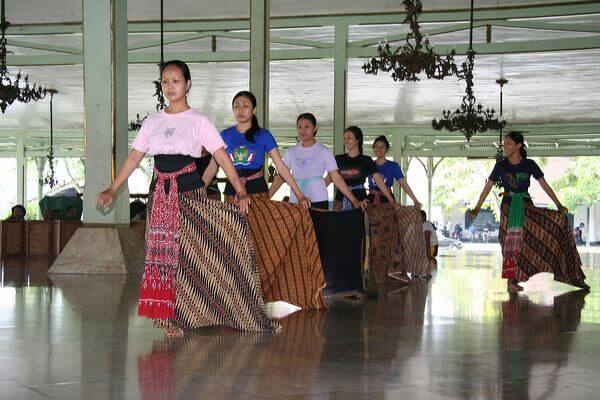 Bedhaya training in the kraton of Mangkunegara, in Surakarta Jukka O. Miettinen

The number of dancers can also be seen as representing the nine human orifices, and the whole composition is thus associated with the structure of the cosmic body, discussed in connection with wayang kulit. Along with other interpretations, the bedhaya can also be regarded as a representation of the struggle between the human mind and desires.

Serimpi, sometimes called “the sister of bedhaya”, shares its basic aesthetics, dance technique, and costumes with the bedhaya, although it is performed by only four female dancers. It has been used in the Central Javanese kratons for the training of the princesses. 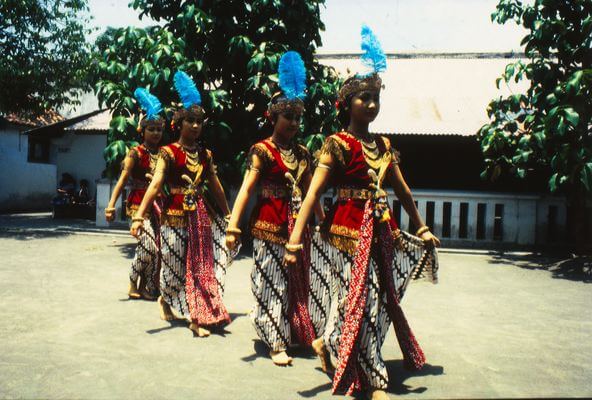 The serimpi dancers arrive in solemn procession in the kraton of Yogyakarta Jukka O. Miettinen 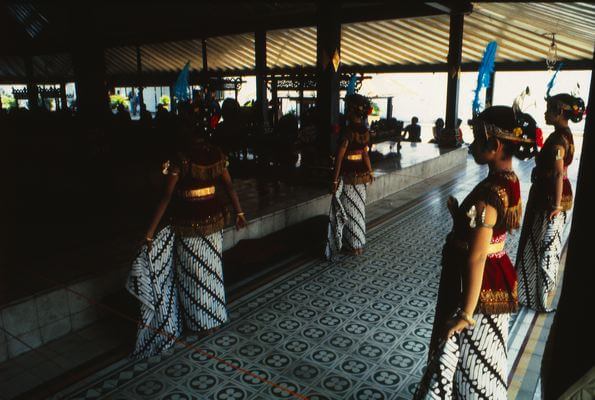 Serimpi is also of ancient origin and with distinct symbolic connotations. Its four dancers are seen as representing the four universal elements of earth, water, fire, and air, as well as the four cardinal points of the universe. The composition depicts a battle with kris daggers between the four heroines, although the actual plot or story is only alluded to, as if taking place in a distant, mythical past. 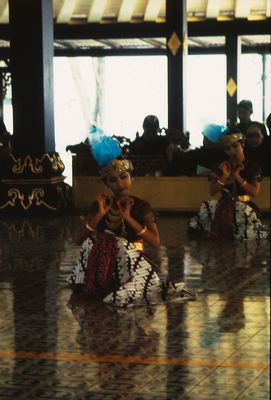 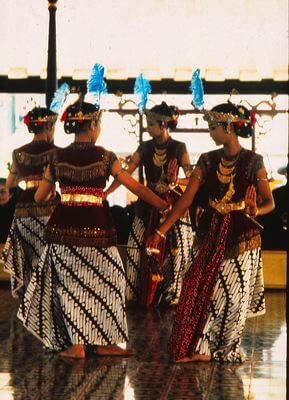 The climax of serimpi is a stylised battle with the kris daggers Jukka O. Miettinen 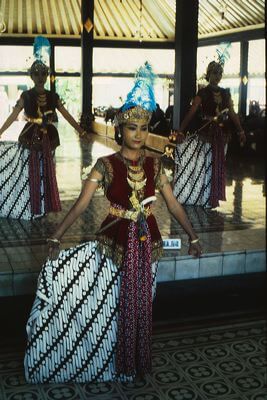 After the dance the dancers solemnly step down from the pendopo hall Jukka O. Miettinen

Serimpi does not, however, have quite the same aura of sacredness as bedhaya, and when court dances began to be taught outside the kraton in the 1910s, serimpi was chosen as the basis of Javanese classical female dance.

There are also forms of solo dance cultivated in the kraton, which do not, however, have the same ritual connotations as the above-mentioned female group dances. The most popular one is the golek, a solo dance portraying a young girl growing into womanhood. The basic position and technique resemble bedhaya and serimpi, but the descriptive movements depict the self-beautifying of a maiden. 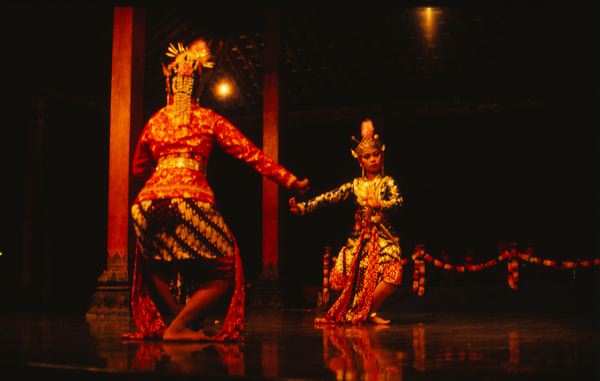 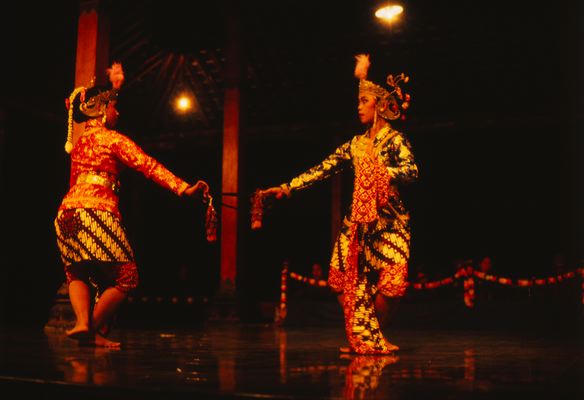 The golek style was originally created in the 1950s and it flourished outside the court. In the 1980s a new form of dance-drama, beksa golek menak, was created by the order of the sultan of Yogyakarta. It is rarely performed today, but the golek style dance numbers are still popular and at present they have become the stock numbers of tourist shows.

The Social Milieu of the Court Dances

Most of the court dances are traditionally attributed to sultans, and many of the rulers are themselves known to have been skilled dancers. The performers were mostly close relatives of the sultan, or members of the court and the bodyguard. The dances are of a highly aristocratic character, and consequently Central Javanese dancers have usually had an exceptionally high social status.

In 1918 the first public dance society was founded, extending the court traditions outside the kraton. However, the aristocratic nature of the dances has survived despite these developments. At present, the court traditions are taught and performed by several private dance societies, although the kratons of Surakarta and, especially, of Yogyakarta are still the best places to see authentic court performances.