Kolam is another “low-country” tradition from Sri Lanka’s southern coast. Although it includes elements of ritual and even trance, it may be classified, however, as a form of folk theatre. A loose plot binds several stock characters and scenes together. The actual play is usually based on a Buddhist Jataka story. 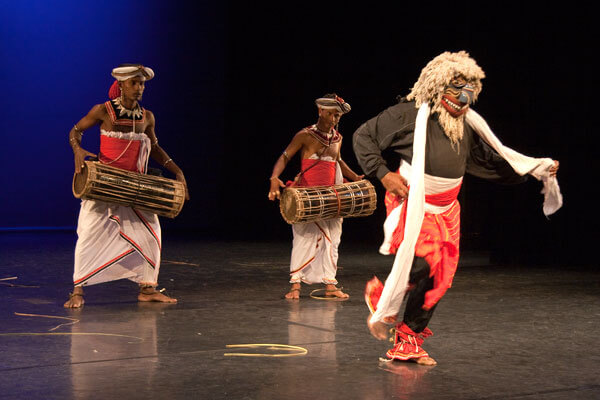 The characters’ lines may be sung by a nearby singer, but they are sometimes also spoken and even sung by the actors themselves. Kolam’s dance technique is clearly related to another low-country tradition, that of sanni.

One can only speculate on kolam’s origins. The tradition itself gives legendary explanations of its birth. Furthermore, there are theories that the tradition stems from ancient pregnancy rites, while its many animal characters clearly indicate its roots in the animistic, animal spirit rites. It seems that kolam is a fusion of archaic belief systems, of Buddhism as well as later popular culture, which reflects the structure of the society at various phases of the island’s history. 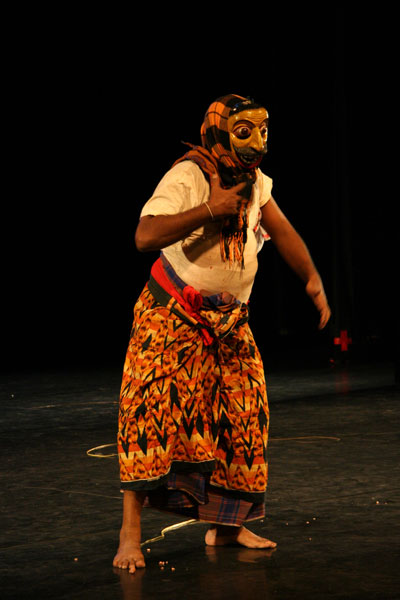 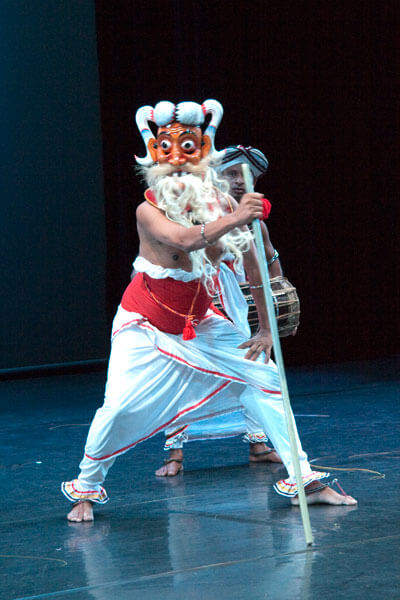 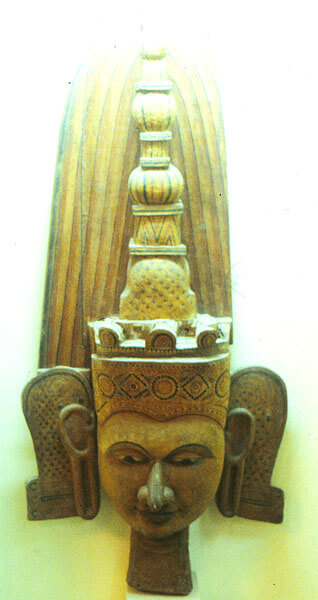 A kolam performance starts with the preliminary rituals addressed to various gods and the Buddha. Then follows a description of kolam’s origins. The legend tells us that there was a king and a queen. The queen was pregnant and, as pregnant women often have, the queen also had a strange craving. She yearned to see mask dances.

This very loose frame for a story enables a theatre to stage a cavalcade of various mask dances and mimes. The prologue is a kind of series of short stock scenes involving all layers of traditional Sri Lankan society. Police officers, villagers, a washerman and his wanton wife, low-ranking courtiers, soldiers, and various animal and demon characters have their own, mostly comical scenes.

Finally the king and the queen enter with their retinue. The king and the queen have huge masks, which are often over a meter tall. Because of their heavy masks the actors must be conducted to their thrones, from where they watch the mask spectacle. In older times, it is believed, the big masks, placed on the thrones, were enough to represent these highest ranks of the characters.

The actual play itself is often based on Buddhist birth stories or Jataka stories. The performance ends with the dance of the gara demons, which is intended to exorcise negative elements and to spread a positive effect and prosperity among the audience and the performers.

Kolam is not a static, crystallised tradition. It allows different kinds of interpretations. Sometimes the narrator or drummers speak or sing the characters’ lines. Sometimes, however, the characters themselves speak or sing. Thus, kolam has also been called a “folk operetta”. It has also been a trend to knit the various characters and scenes together by means of a story. Nowadays kolam dances and scenes are also adapted for the marionette theatre as well as being shown separately in shows for tourists. 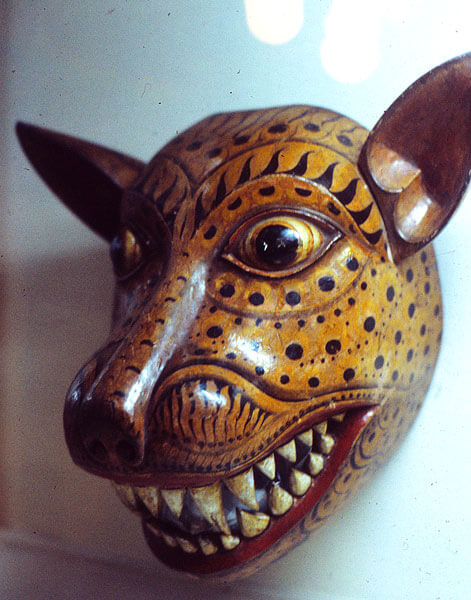 The dozens of different kolam masks that are used in one performance are all but homogenous in style. Most of the masks, except the masks for demons and animals, represent clear character types. Many of them, especially those belonging to the lower strata of society, are naturalistic in style; some are even caricatures. 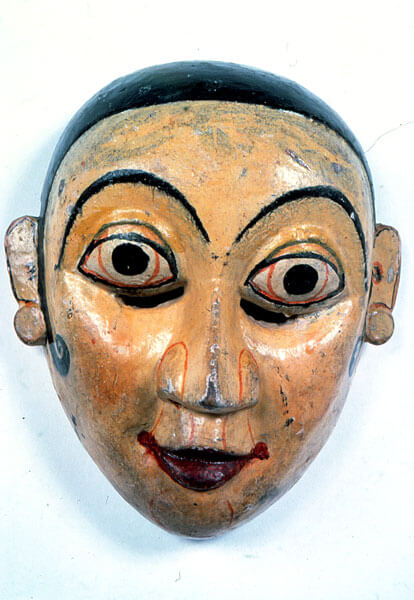 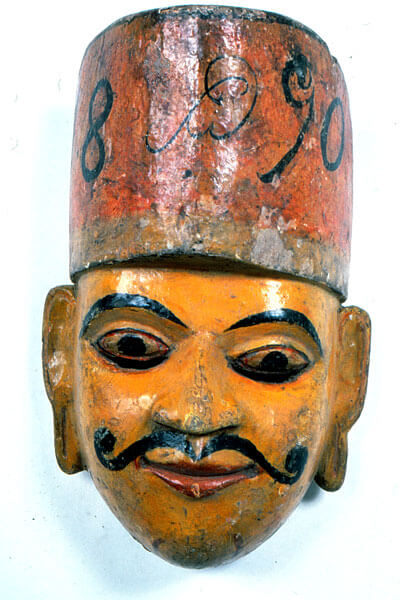 The naturalistic masks include, for example, the washerman and his wife, the wanton village beauty Lenchina, and many other figures belonging to the village context. The masks of some other characters, such as the stupid colonial policemen, can be seen as funny caricatures. 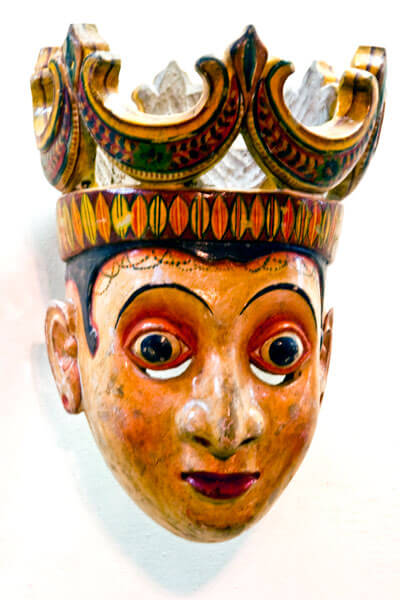 The noble characters, such as the king and the queen and the numerous other royal persons with their icon-like features, are almost depersonalised. The same applies to many masks of the supernatural beings, particularly to those of higher gods and goddesses. 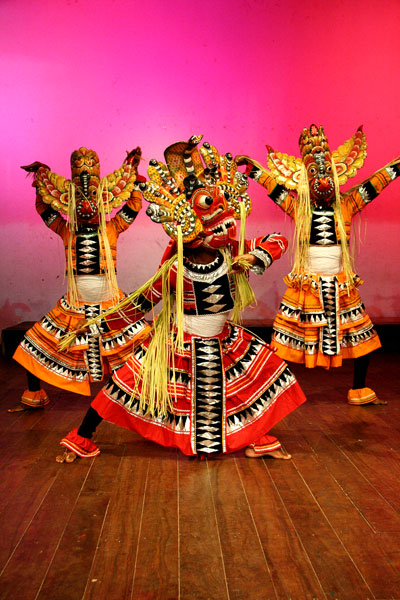 The war between garuda birds and snake demons is also part of the kolam repertoire Jukka O. Miettinen 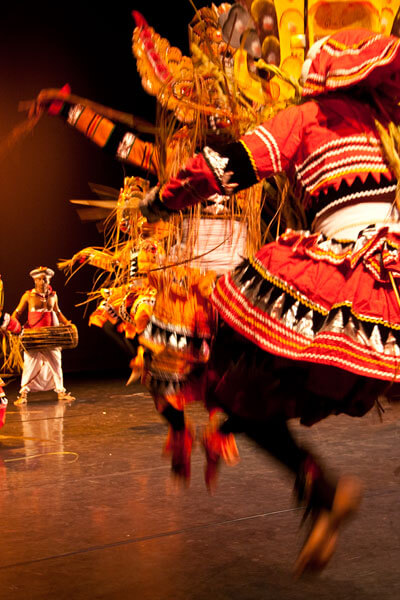 The war between garudas and snake demons Jukka O. Miettinen

Some masks of the demon characters may, in their rude features, reflect archaic mask practices, while the famous masks of the garuda and naga characters, with their large cobra crowns, are again stylised in a completely different way, as they also belong to the repertoire of the tovil exorcism rites.