Nangiarkuttu, The Female Branch of Kutiyattam 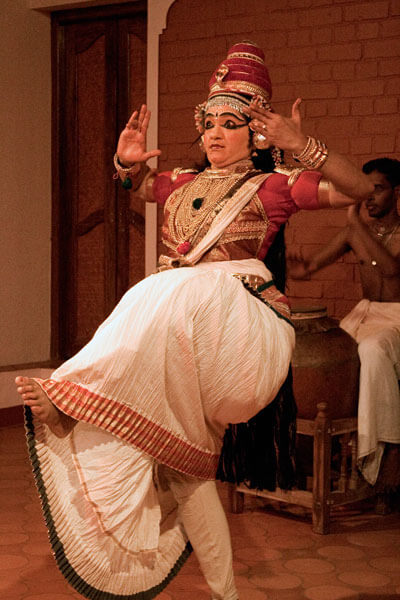 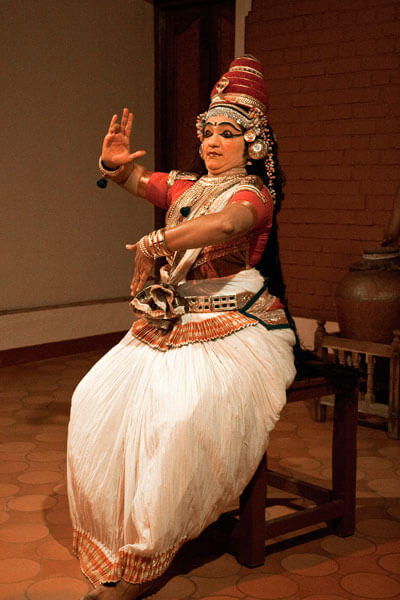 Much of nangiarkuttu’s mimetic narration is performed while the actress sits on a wooden stool Jukka O. Miettinen

Nangiarkuttu (also nangiar koothu) is a one-woman type of ritual theatre, originally performed in the temple theatres in Kerala. Just like kutiyattam and kathakali, it concentrates on mimetic abhinaya acting. Traditionally the stories cover the life cycle of the god Krishna. It is performed by Nangiars, women of the Nambiar families, while the accompanying music is played by Nambiars.

Nangiarkuttu clearly has a very long history, although it is not known in detail. Even the 2nd century AD Drama Manual, the Natyashastra, mentions similar kinds of female solo performance types.

Nangiarkuttu was performed solely in the temple theatres and during certain cremation ceremonies, although the last of such a kind of ceremony is known to have been held a century ago. Nangiarkuttu was slowly dying out until the early 1980s, when important gurus and actresses started its vigorous revival.

Nangiarkuttu is now also performed outside the temple theatres. Besides the Krishna’s story, which has traditionally been the content of nangiarkuttu, now other stories are also enacted. Nangiarkuttu has recently been added to the syllabus of the State Theatre School, Kerala Kalamandalam. The future of nangiarkuttu seems bright, both nationally and internationally.

Traditionally the text enacted by nagiarkuttu has been the Sree Krishna Charitam (Story of Krishna), which consists of 216 sloka verses. It describes Krishna’s life from his birth to the end of the story cycle. The Rama Charitam (Story of Rama) was also added to the repertory later, and recently a story cycle based on the life of Draupadi from the Mahabharata has been dramatised like nangiarkuttu. The sloka verses combine several languages. The narration is usually in Sanskrit while the characters’ direct spoken lines may be in Prakrit or in Malayalam.

Nangiarkuttu was originally a form of temple offering and its full execution took 12 consecutive days. Complicated rituals precede the actual play, including purification ceremonies, worship of the deity of the temple, and a ritual dance performed behind a hand-held curtain. After the performer has done her make-up and put on her attire and the headgear she becomes a personification of the mother goddess Bhagavati. 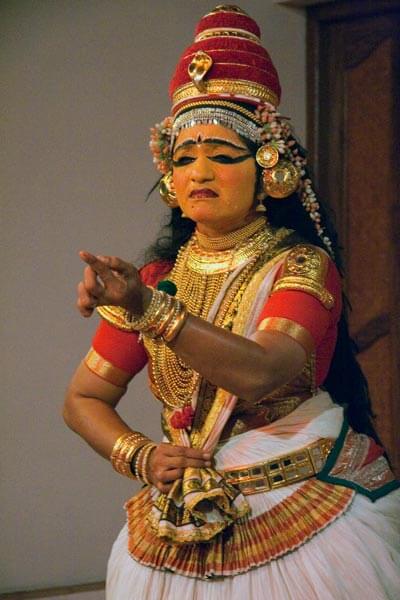 The focus of nangiarkuttu is on abhinaya mime acting Jukka O. Miettinen 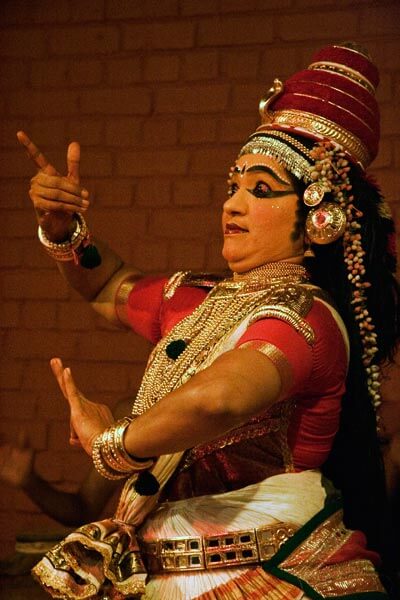 The focus of nangiarkuttu is on abhinaya mime acting Jukka O. Miettinen

In many respects nangiarkuttu is related to kutiyattam, in which the Nangiar actresses take the female roles. The traditions are clearly related in their acting technique, make-up, and costuming. Nangiarkuttu, however, is a solo form, in which a single actress both acts as the mimetic narrator and assumes all the roles of the story. One could indeed talk about the art of “mono acting”.

On the floor of the stage, on the actress’s right hand side, sits a female singer who sings the slokas or verses, which the actor then gesticulates. The whole process of enacting the story focuses on the combination of hand gestures and the facial, particularly eye, expression.

As is often the case in kutiyattam, and also in nangiarkuttu, the actor frequently sits on a wooden stool facing the big oil lamp, the focal point of actions and originally the only source of light for the performance. Behind the small stage sits the drummer, who plays mizhavu, the large drum made of thin plates of copper. It is the chief musical instrument of nangiarkuttu in addition to the cymbals played by the singer. 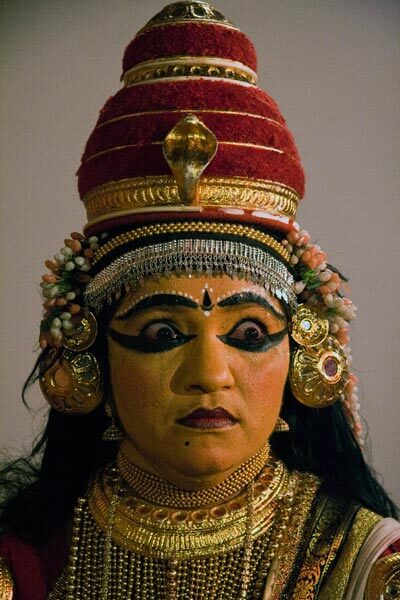 The headgear, surrounded by a naga snake, refers to the mother goddess Bhagavati Jukka O. Miettinen

The costume consists of a wide skirt-like lower garment and a red blouse. The high, red headgear is surrounded by a gold-coloured naga or snake motif. With its ochre base the make-up bears similarities to the make-up of the female characters in kutiyattam and the minukku characters of kathakali.