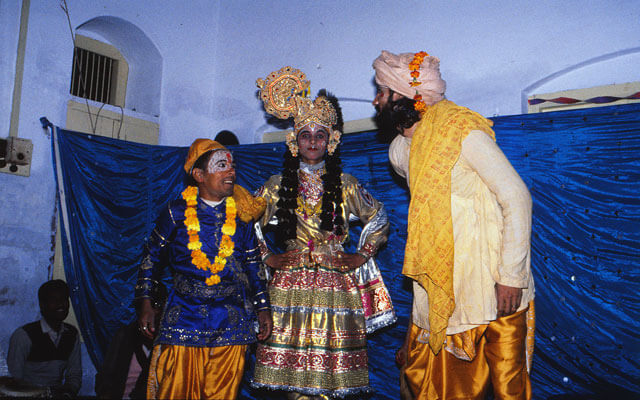 Raslila (ras, dance or blissful state; lila, play) is a form of devotional operatic play dedicated to Krishna’s story, particularly to his childhood and amorous youth. It evolved in the regions south of Delhi, in villages and cities related to Krishna’s life. Its main characters, those of Krishna, his beloved one, Radha, and the gopis, the cowherd girls, are played by young boys.

It is believed that the tradition of enacting important moments of Krishna’s life as raslilas started in the regions connected to Krishna’s mythology at about three hundred years ago. Three significant Vishnu bhakti saints, Ghumand Dev, Hitharivansh, and Naryan Bhatt are believed to have created the tradition, basing it on older folk traditions and kathak dance technique. 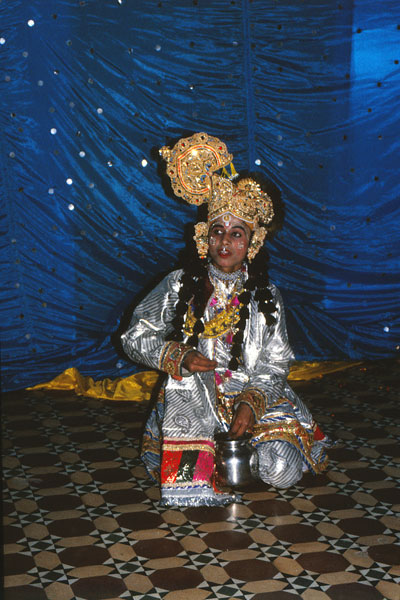 Raslila is still today very much a living tradition, performed mainly by amateur groups during different kinds of religious festivities in the regions south of Delhi, particularly in Vrindavan. A troupe usually consists of a group of five musicians, a swami or a leader of the group, two 11–13-year-old boys playing the roles of Krishna and Radha (Krishna’s beloved one, who became an inseparable character of Krishna’s mythology in the 6th century), and a group of 8–10-year-old boys playing gopis, or cowherd girls, so prominent in the adventures and miracles of Krishna’s youth. Adult men, often members of the orchestra, play the roles of the clown and minor characters. 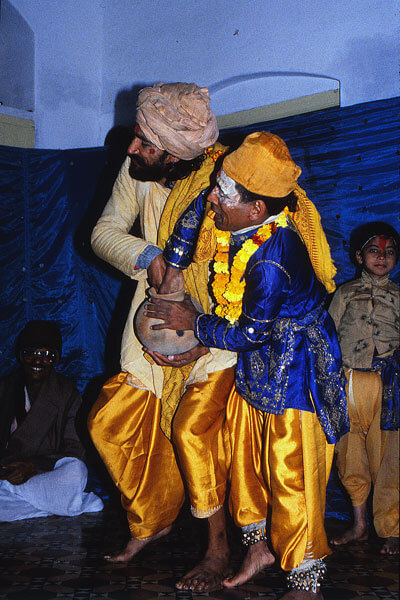 Adult men play many of the minor roles Paula Tuovinen

The Texts, the Music and Dance

Raslila is based on bhakti literature written in the Braj language, which is renowned for its sweetness and devotional pathos. Almost every important event of Krishna’s life has been turned into a lila or a play. The leader of the group, the swami (who is always a learned Brahman priest), sings out the verses, which the actors then enact on the stage. During the play various characters, such as the clown, speak their own lines.

Raslila is usually accompanied by five musicians sitting in a semicircle between the acting area and the audience. They play a sarangi (a stringed instrument), a hand-drum, cymbals, and a harmonium. The music represents the bhakti tradition of the region. 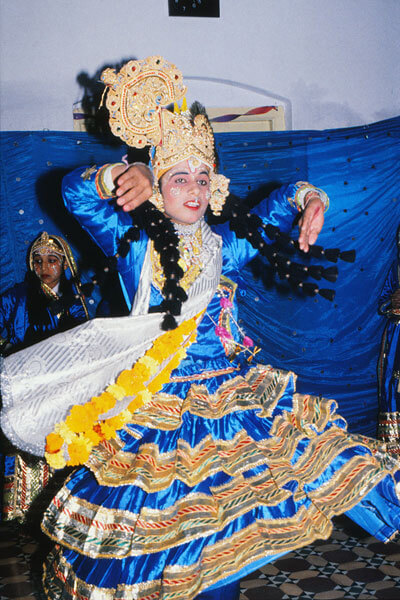 The kathak technique is employed in the dance sequences Paula Tuovinen

Ras, or dance, has a central role in the performances because it also has such an important part in Krishna’s mythology. In fact, the dance part in a whole raslila performance may be longer than the actual play. The dance technique is based on kathak dance, which evolved in North India during the Mughal period.

The dynamic footwork and raised hands with elegantly extended finger positions, which are derived from Kathak, dominate the movements and poses. However, as the main performers are child amateurs, the kathak is usually performed with a certain touching clumsiness. 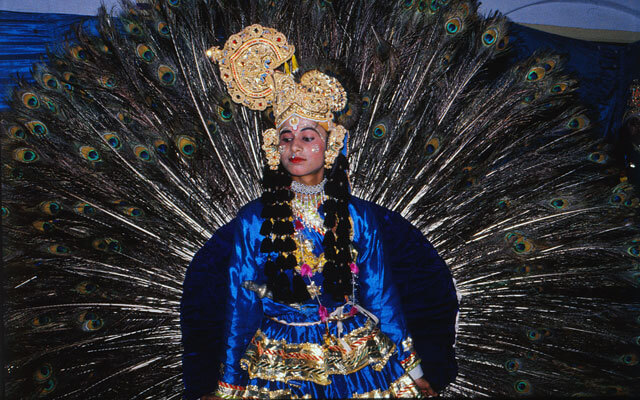 Raslilas are divided into two sections. It starts with ras dance, which is followed by the lila play. The whole performance lasts about three hours. There are several lilas to be chosen from, according to the needs of the particular performance. The performance is preceded by rituals and fasting. The members of the orchestra are not allowed to eat or even drink during the performance, which is regarded as a sacred offering.

Secular raslila can be performed in the streets, while the actual sacred raslila is usually enacted in the temple courtyard. The acting space is divided into two spheres: Krishna’s and Radha’s throne and the actual acting area. Painted backdrops with fantastic lotus ponds and fabulous forest scenes are often employed. Stylistically they are related to the miniature paintings of the region.

The enactment also bears similarities to the region’s visual arts. The drama is punctuated by tableaux in which the action freezes into kinds of still pictures, clearly resembling similar scenes seen in miniature paintings and altar installations. 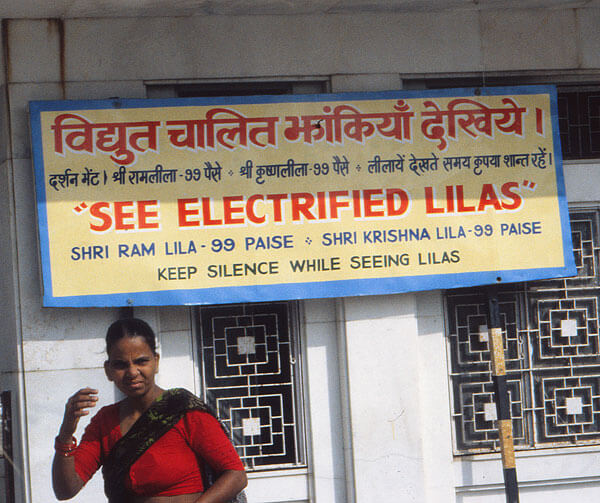 Krishna’s and Radha’s costumes and make-up are lavish and glittering. Krishna, for example, wears a shiny tunic, a large peacock-leather crown, and several flower garlands around his neck. His make-up is heavy, while large flower designs decorate his chins.