South Korean Theatre and Dance in the Twentieth Century

The development of South Korean theatre and dance in the 20th century has been dominated by two, apparently contradictory trends. On the one hand, Western influence has been adopted and adapted enthusiastically, while, at the same time, serious attempts have been to study and revive original forms of the Korean performing arts.

These seemingly completely opposing trends have, in fact, created a fruitful basis from which a new kind of aesthetics, at the same time international and modern as well as instinctively Korean, has grown.

The intensive search for a Korean identity is easy to understand because of the historical and political circumstances. First, Korea underwent the Japanese occupation of 1910–1945, after which the country was brutally divided by the superpowers into North Korea and South Korea.

Western-type spoken theatre found its way to Korea via Japan, where many Korean intellectuals studied during the Japanese occupation in the early 20th century. Even after the occupation the contacts between the countries remained close.

As in Japan, so too in Korea, among the earliest staged Western dramas were plays by Shakespeare, Ibsen, and Strindberg. The first productions reflected Western stage realism and even naturalism. Later the repertoire also included plays by Maeterlinck and O’Neill. Later the expressionism was adapted to Korean theatre, again through Japan.

The rise of the Korean drama literature began in the1930s. An important pioneering work was The Clay House, written by Yu Chi-jin in 1934. It discreetly hinted at a politically extremely sensitive topic, the Japanese occupation of Korea.

At that time Japanese censorship dictated much of the contents of art. The renaissance of Korean culture began when the occupation ended in 1945. The Korean National Theatre, the first of its kind in the whole of Asia, was founded in 1950. Somewhat later the first Western-type theatre hall with a proscenium stage, sponsored by the Rockefeller Foundation, was built in Seoul. Gradually, large theatre houses and cultural centres have mushroomed all over the country.

The official cultural policy in the 1960s focused on the revival of Korea’s own cultural heritage. Both the important forms of the traditional performing arts and their praiseworthy performers were proclaimed “National Cultural Treasures”.

Many of the traditional forms of music and dance were adapted to the huge, modern stages by multiplying the dancers and the musicians. Experiments were also made by combining features of the traditional theatrical arts, such as masks, with modern stage aesthetics. In the field of Western spoken theatre, avant-garde and absurd dramas gained popularity.

Strict political censorship overshadowed the cultural life of the 1970s and the early 1980s. All political topics were forbidden. Sensitive themes were sometimes touched upon in the form of a physical, Artaud-inspired, allegorical style.

The 1970s was the beginning of the triumph of American musicals in Korea. The influence of the United States is also felt in the teaching of arts, which, to a great extent, follows the American models.

The most famous of the kyabang dances, Salpuri and the Monk’s Dance, were created at the beginning of the 20th century by a famous dancer, Han Song-jun. They were based on traditional material, although they were meant to be performed on a modern stage. These early 20th century dances are still very popular, while new generations of dancers give them new emphases.

Just as in the case of modern spoken theatre, so too Korean modern dance arrived in Korea, during the Japanese occupation, from Japan. The “father of modern dance” in Japan was Baku Ishihi, who was inspired by the German, expressionistic Ausdrucktanz. The Korean students who had been his pupils are credited as pioneers of the modernistic movement in Korean dance.

Possibly the most famous of Baku Ihsihi’s Korean students was the legendary beauty Choe Sunghui, who, following her teacher’s advice, started to formulate a modern dance style, which still echoed the Korean tradition. Later, Choe Sunghui moved to North Korea.

The dance life in South Korea has clearly two, almost contradictory trends. On the one hand, traditional forms of dance are carefully studied and performed while, on the other hand, the art universities teach dance much according to American models, including the Graham technique. 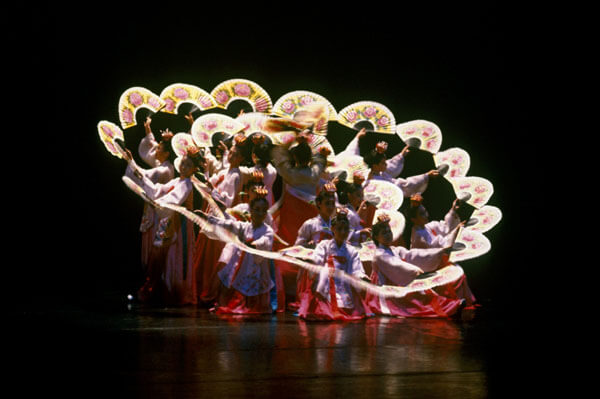 New concepts have been coined, such as “creative dance”, meaning completely new creations employing different techniques, and “creative Korean dance”, which refers to basically Korean forms of dance although, for example, adapted for large, modern stages.

“Korean creative dance” has been widely propagated by the dance departments of art universities. Several choreographers have been active in this field, such as Mun Il-jo, Kwi-ja, and Kim Mae-ja.

A contemporary composition in which the dancer-choreographer Sohn In-young draws, by means of a video projection, lines of ink calligraphy on the stage floor Jukka O. Miettinen

There are numerous dance companies in South Korea. The National Dance Troupe was founded in 1962. The classical ballet group was separated from it to form its own independent troupe in 1973, and nowadays Korea produces many top quality ballet dancers, who are appreciated around the world. The Seoul Dance Festival was founded in 1973.