In India, as elsewhere in Asia, there are numerous forms of storytelling and puppet theatre traditions. Now, in the age of movies, TV and digital technology, many of them are in serious danger of extinction. Many of them live mainly in the village context.

The storytelling tradition served, at least partly, as the starting point from which larger theatrical performances, based on the same oral material, later developed. The process can roughly be outlined as follows:

India has several examples of theatrical traditions illustrating the different steps of the development described above. In Rajasthan, for example, there exists the phad tradition, in which the narrator, while telling his story, opens up a huge phad picture scroll on which the important scenes of his narrative are painted. The stories depict the life and deeds of Pabuji, a local heroic warrior god. Similar picture scroll traditions can also be found in Gujarat, Bengal and Bihar. 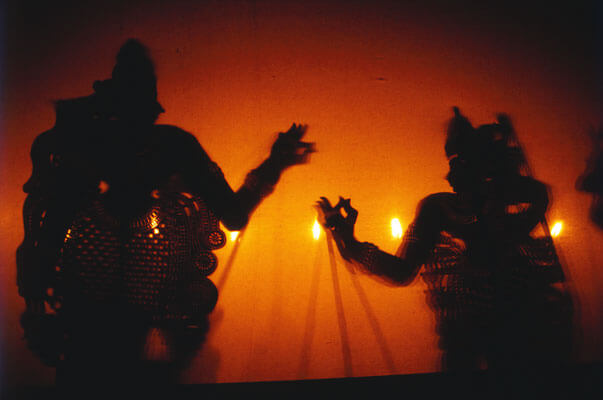 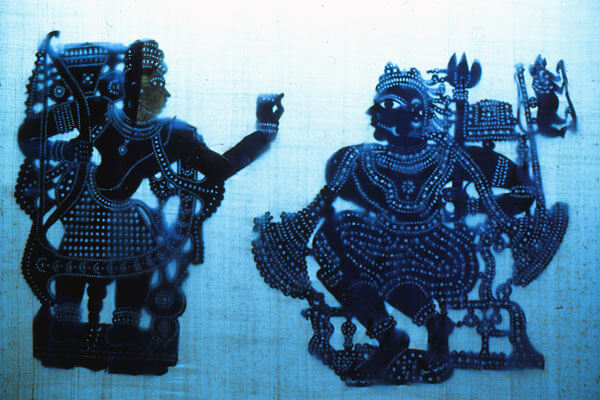 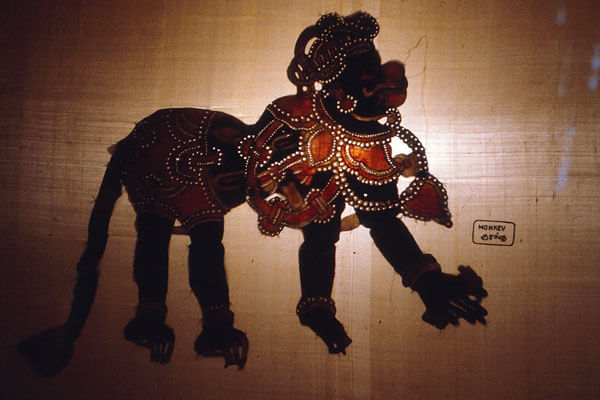 The next step in the development of storytelling was shadow theatre, in which the figures of the ancient picture panels and scrolls are, in a way, cut out into flat shadow puppets. The themes of shadow theatre in India deal mostly with the Puranas and the great epics, the Mahbharata and the Ramayana.

Tolpavakoothu shadow theatre has already been discussed in connection with Kerala’s theatrical traditions. Other shadow theatre genres can be found in Maharashtra, Karnataka, Andhra Pradesh, and in Orissa.

The sizes of the puppets vary from some ten centimetres to one metre. Usually at least one hand of the puppets can be moved by a rod. Stylistically the puppets are linked to the traditional visual arts of their respective regions. 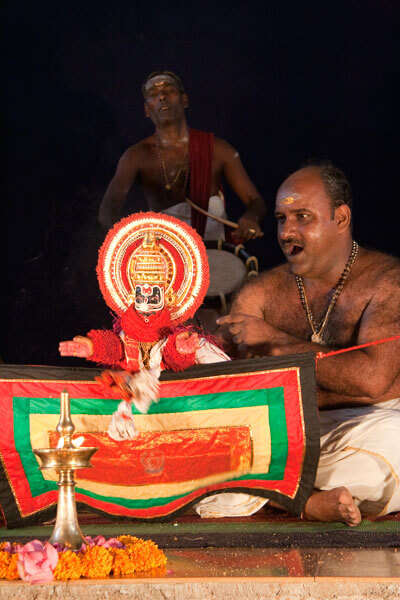 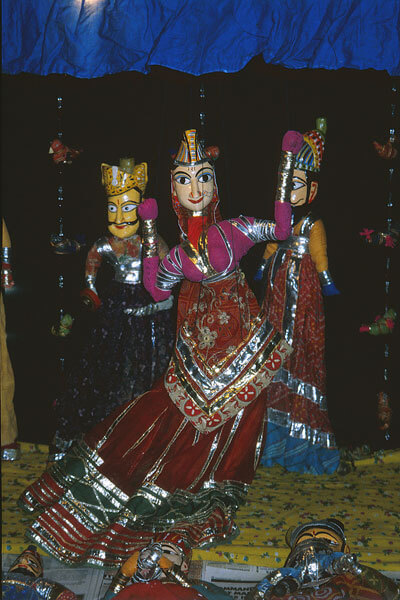 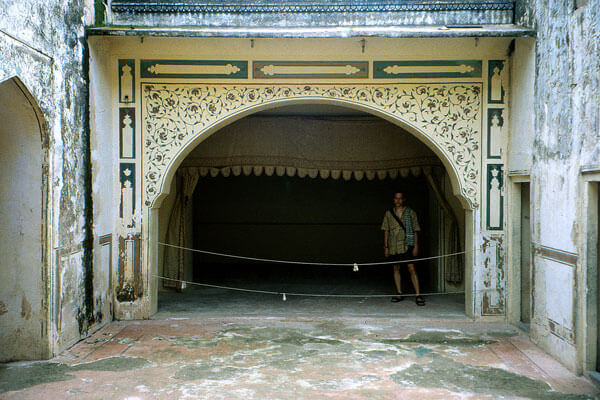 An 18th century permanent stage for a marionette theatre at the Upper Palace in Jaipur Jukka O. Miettinen

Kerala’s phavakathakali glow puppet theatre, which imitates kathakali, was discussed in connection with the traditions of Kerala. Other forms of puppetry can be found in Orissa, Tamil Nadu, Karnataka, and West Bengal.

One of the most famous of Indian puppet theatre genres is the kathpuli marionette theatre of Rajasthan. In older times, when courts and aristocrats acted as protectors of the arts, local, large epic stories could be staged as kathpuli plays. There exists even a small theatre house for marionette theatre in a palace in Jaipur. 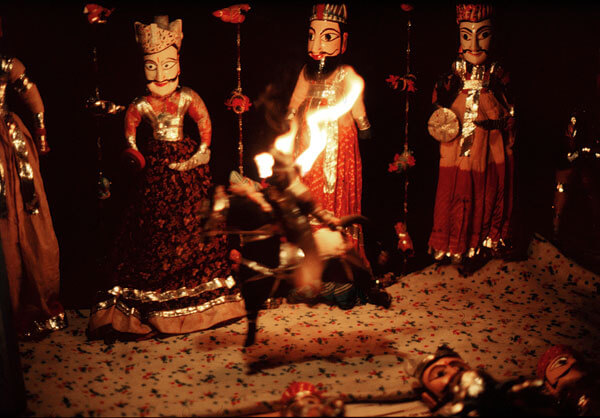 Fire can be employed in the performances Jukka O. Miettinen 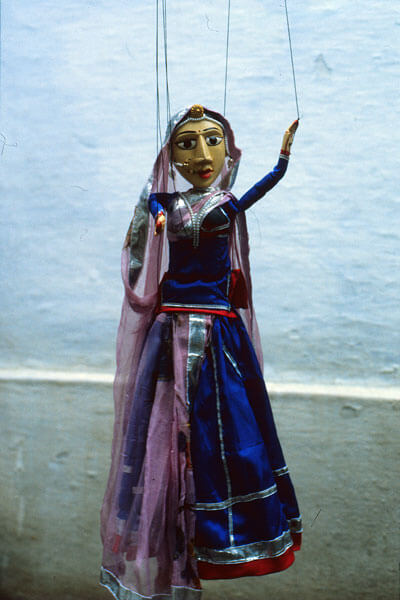 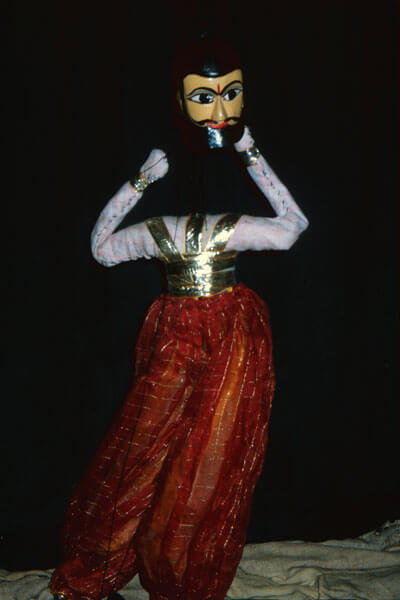 The Bengali fakir is even able to remove his head Jukka O. Miettinen 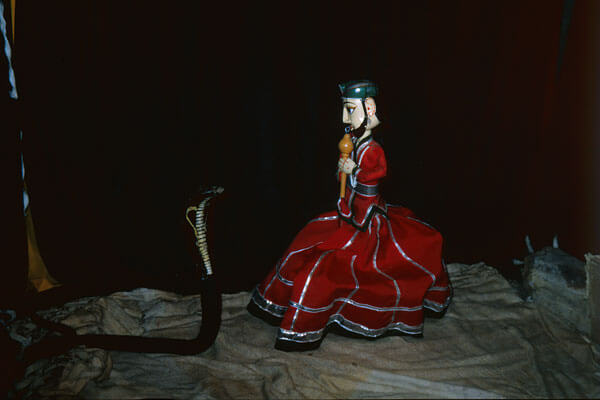 Nowadays kathpuli performances consisting of short, entertaining stock numbers are more popular. They include, for example, a dance scene imitating kathak dance, the tricks of a Bengali fakir, a snake charmer, and a juggler’s dance.

Stylistically the kathpuli marionettes reflect the style of the Rajput paintings of Rajasthan. The puppets’ faces are carved of wood and painted, while their bodies are stuffed with cotton. Their dresses meticulously follow the conventions of older times.