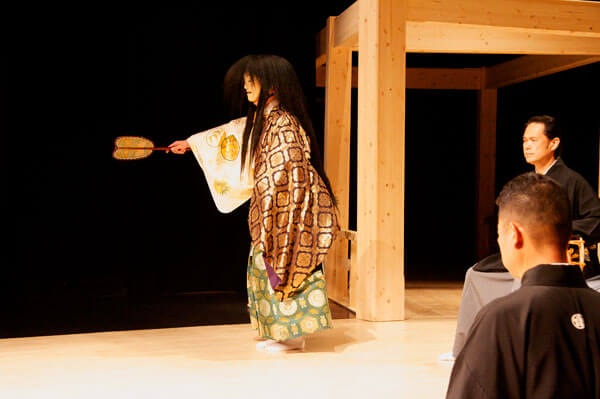 Tenko, based on a Chinese legend, tells about a boy who received a magic drum from heaven. To get it the emperor lets him be killed. Nobody, however, can get a sound out of the drum. A prayer ritual is arranged for the boy’s soul, which then appears. It is dancing; it beats the drum and finally disappears into heaven Jukka O. Miettinen

The play is based on a Chinese legend that recounts the deeds of a youth called Tenko. He has received a supernatural drum from the heavens. The emperor wants the drum for himself but Tenko refuses and flees. Finally he is captured and drowned at sea. Once the emperor receives the drum a wonder happens: no one can get a sound out of it. So a minister is sent to invite Tenko’s father to the palace to beat the drum.

The minister arrives and introduces himself. He describes the background of the situation (see above). Tenko’s father arrives, singing about his old age and his yearning for his lost son. The minister mentions the drum at the palace that will not sound and invites him to follow him. The father is, however, afraid that he will also be killed and so he hesitates. The minister encourages the father, who then sings that the sound of the drum would be a message from his son. Once they arrive at the palace, the chorus points out that it is time to beat the heavenly drum. The father, indeed, is able to produce sound from it. The chorus describes the supernatural beauty of the sound, which even touches the emperor’s heart. The father is handsomely rewarded and taken back home by an imperial servant. It is announced that a prayer ceremony will be held for the dead boy’s soul on the seashore where Tenko was drowned. When the ceremony starts, Tenko’s spirit appears from the water, singing about the tortures and drowning that Tenko had experienced. Tenko’s spirit beats the drum and dances. Finally the chorus describes the beauty of the autumn night and how Tenko dances on the waters and finally disappears in the far distance.