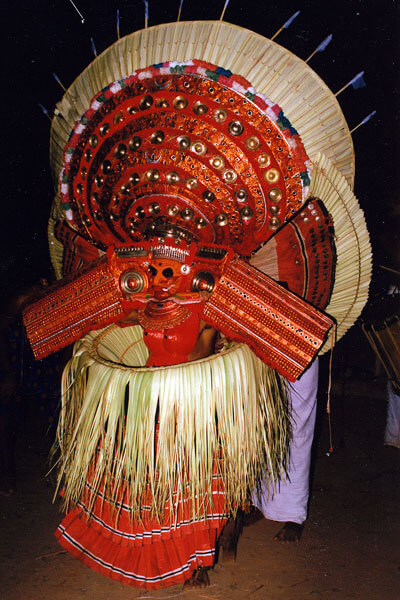 In Kerala there live side by side very archaic forms of ritual theatre and forms of theatre closely related to classical theatre that clearly belongs to the Natyashastra tradition. One of the earliest forms of theatre found in Kerala is teyyam, a group of annual rituals or “festivals” lasting from one to seven days.

The Teyyam tradition belongs to the village and tribal context of the northern parts of Kerala. It reflects the construction of the local religious belief-system. It is a cult inseparable from local Hinduism, particularly the worship of the Mother Goddess, while, at the same time, it preserves beliefs and magical practices clearly preceding the arrival of Hinduism.

Some scholars believe that the origins of teyyam lie in the Neolithic Stone Age, as is indicated by the many archaic features that teyyam still preserves. Early textual sources mentioned teyyam approximately 1500 years ago. It seems that it has gone through several stages of development, and it is still doing it even today.

Although it is connected to Hindu tradition, teyyam has preserved elements of animistic spirit worship as well as ancient ancestor and hero worship. It often includes an element of trance, which also indicates its archaic roots. Teyyam is closely related to local village deities. Earlier, it is believed, there were nearly 400 different deities related to teyyam. Now they are reduced to 40. 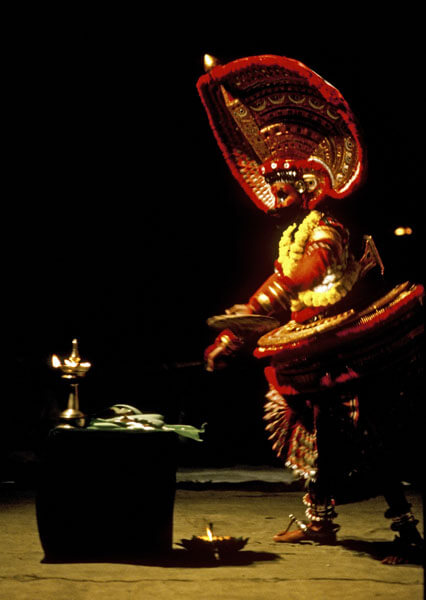 Hereditary families of teyyam dancers carry on the tradition. They preserve palm-leaf manuscripts on which tottams, or teyyam songs, are written. Teyyam is performed by men, although there is one exception, teyyam koothu, which is always carried out by women. Teyyam rituals are accompanied by local instruments, such as pipes, drums and cymbals. The rituals start with preliminary ceremonies, which are followed by the actual dance.

Teyyam dances are robust and powerful. They seem to preserve elements of early martial arts and archaic weapon worship. They may represent an early stage of development of the movement technique now seen, for example, in kathakali. On the other hand, the trend has recently been to mould the dance section according to the more classical styles. 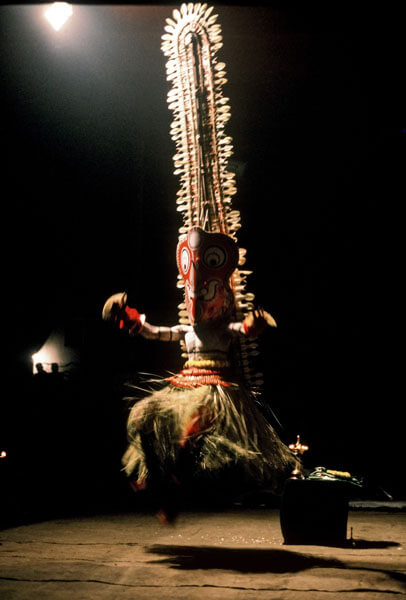 Another variant of teyyam Sakari Viika

The costume and make-up, which vary greatly in each teyyam tradition, seem extremely old and authentic. The faces of the dancers are painted with bright colours to create the impression of a kind of animal spirit or a completely alien creature not belonging to this word.

The stylised costumes combine natural materials, such as coconut leaves with coloured cloth. In a similar way as the make-up and costume, the imposing headdresses also vary according to the tradition and the deity to whom the ritual is addressed. Teyyam, indeed, seems to offer a rare glimpse of the earliest forms of theatrical arts of the whole of mankind.