The earliest known permanent settlements in India appeared approx. 9,000 years ago. They gradually developed into one of the earliest pre-urban civilisations in the world, the so-called Indus Valley Civilisation, which flourished in approx. 2700–1800 BC. Its centres were Harappa and Mohenjodaro in the Indus River Valley, in present-day Pakistan. In their ground plans these well-organised, city-like settlements already reflect clearly differentiated social classes or castes. 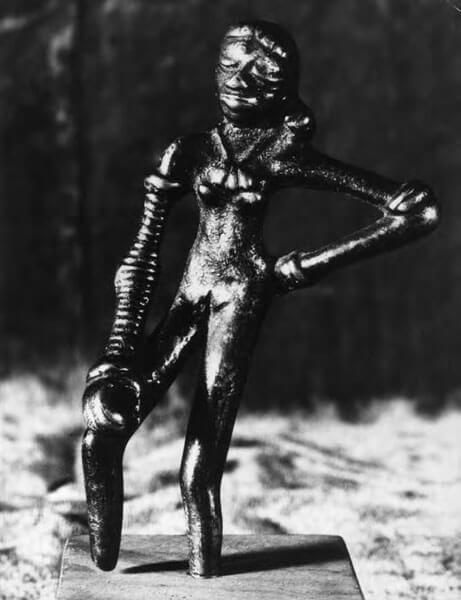 The Indus Culture had its own writing system, which served religion, trade and administration. However, it has not yet been deciphered. It is believed that many features of the later Indian religions can be traced back to this early culture. Two small sculptures give some information about dance of the period.

The Indus Civilisation was followed by the arrival of Aryans from the west and the Vedic Period (1600–550 BC), when the four Veda books were compiled. They formed the basis for the present form of India’s main religion, so-called Hinduism.

Brahmanism, the early form of Hinduism, was dominated the priestly brahman caste, which had the prerogative for religious rites. The other three castes were ksatriyas or the warriors and nobles, vaisyas or the peasants, and sudras, the serfs.

The Age of the Buddha and the Classical Period

Slowly the cultural focus moved eastwards, to the Ganges Valley, where, among other preachers and religious reformers, Gautama Buddha also started his career as a spiritual teacher in the 5th century BC, which led to the birth of Buddhism. It flourished in India until the 12th century AD and spread to Southeast Asia and East Asia, thus becoming one of the great world religions.

In the 3rd century BC most of the subcontinent was united into the Mauryan Empire by a Buddhist king, Chandragupta Maurya or Ashoka the Great. India’s “golden” or “classical” period was the Gupta period in approximately the 4th–7th centuries, when much of the earlier orally transmitted literary heritage was written down.

India can roughly be divided into two large cultural areas, the northern and the southern one. Most of the discussion above has been about the northern area. Empires in southern India included the Chalukya, the Chola and the Vijayanagara Empires. These highly civilised dynasties belong to the Indian Medieval Period, which started in the 7th century and lasted until the 16th century.

The Spread of Islam

In the north, following invasions from Central Asia in the 9th–12th centuries, large areas came under the rule of the Islamic Delhi Sultanate and, later in the 15th century, the Mughal Empire. Thus North India received influences from Islamic and, particularly, Persian culture.

Under the rule of the Mughal Emperor, Akbar the Great, India enjoyed cultural and economic progress while different religions lived relatively harmoniously side by side. The Mughal Empire gradually expanded to cover large parts of the subcontinent.

Some kingdoms had been able to resist the Mughal subjugation, which was seriously threatened for the first time by a Rajput king in the 14th century and later by the Maratha Confederacy that dominated much of India in the mid-18th century.

European powers, such as Portugal, the Netherlands, France and the British started to establish their trading posts in India as early as the 16th century. Taking advantage of internal conflicts, the Western powers gradually started to colonise the country.

By 1856 most of India was under the control of the British East India Company. A year later, a nationwide revolt, the Sepoy Mutiny, also known as “India’s First War of Independence”, challenged the Company’s control. As a result, however, India was brought under direct British colonial rule.

In the 20th century, the Indian National Congress and other organisations launched a nationwide struggle for independence. Mahatma Gandhi led millions of people in national campaigns of non-violent civil disobedience.

India gained its independence in 1947. At the same time, however, Muslim-majority areas were apportioned to form the separate state of Pakistan (and later Bangladesh). In January 1950 India became a republic.