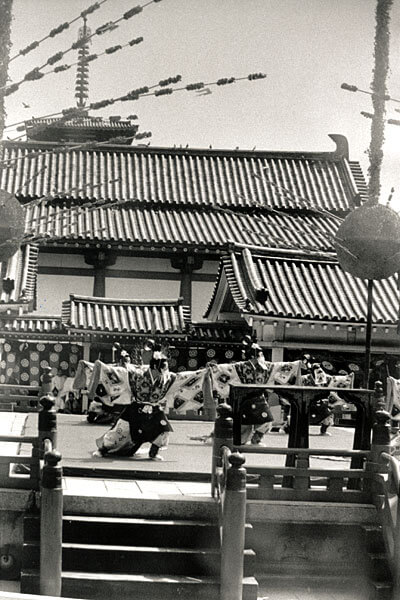 Bugaku refers to a group of ceremonial dances, performed both in temples and at the imperial court. The dances were originally adopted from China and Korea in the 7th and 8th centuries and they were further refined during the next two centuries. They are still performed both in the temple context and in court festivities, such as the Emperor’s coronation ceremony.

Nara’s Prince Shotoku was an ardent admirer of bugaku dance. A Bureau of Music was set up at the imperial court in 701. It supervised the training of bugaku dances. The dancer Hamanushi was regarded as the master of bugaku. In the mid-8th century, he travelled to China to familiarise himself with the court dances of the Tang period.

The bugaku repertoire was further shaped in present-day Kyoto during the Heian period (794–1192), when the dances became a passion of the courtiers at the imperial palace. They composed their own dances, which they themselves also sometimes performed.

Later, when the imperial court lost its wealth and could not afford dance groups, temples began to maintain the tradition. Nowadays the imperial household has an institution that is responsible for continuing the tradition. Every now and then performances are also staged at temples and important scenic spots, as well as on public stages, removed from their ritual context.

Many of the bugaku dances use wooden masks. This is the case particularly with the demonic characters, since any kind of facial expression in the court context was regarded as vulgar. Thus masks were used in order to portray particularly the powerful characters.

Compared with the above-mentioned gigaku masks, bugaku masks are less dramatic in their characterisation, as they do not form part of actual dramas but of highly stylised dances, which only rarely have clear dramatic content.

Bugaku is traditionally performed on a raised platform measuring 7 by 7 metres. In the introductory part the dancers slowly appear on the stage. The tempo of the music gradually gets faster, while the dancers begin their extremely slow, solemn, almost minimalistic movements.

Some of the dances may originally have had a narrative content, such as the battle of an Indian king with an invisible opponent, or a simple ball game, while some of them also include features of parody. Many of the dances, however, are completely abstract. Generally the original narrative content has been dispelled by the increasing addiction for ceremonial elegance, prevalent at the Heian court.

Strict symmetry is favoured in bugaku dances and the movements are usually executed in the direction of the four cardinal points. This reflects the ancient Hindu-Buddhist cosmology in which the four points and the centre are seen to comprise the structure of the entire universe.

In the whole Indian-influenced region of Asia, the purpose of many archaic dances has been to reflect, contemplate and venerate the laws of the universe. In bugaku dances the exactness of the repetitive movements is of the utmost importance, since it has been believed that it ensures the continuation of the universe.