Chhau refers to three types of dance forms performed in the eastern parts of India, in the present states of West Bengal, Jharkhand, and Orissa. The etymology of the term chhau is not clear. Some state that it is derived from a word meaning “a mask” while some say it comes from a word meaning “a military camp”. Both interpretations, however, reveal something about the genre. Colourful masks are used in two of the three sub-genres, while all of them are based on indigenous martial dance.

All of them are performed solely by male dancers while singing, so the central element in most of India’s dance and dance-drama types is almost absent. Two of them are accompanied only by percussion instruments.

The dance technique reveals chhau’s martial origins. It consists of powerful movements, kicks, and leaps. In its basic position the dancer’s legs form a square. In this extremely open leg position the dancers are able to proceed on the stage by moving the soles of their feet slightly sideways without lifting them from the ground.

Chhau became renowned both nationally and internationally only at the end of the 20th century. Now it is often included in festival programmes and removed from its original context. Its powerful technique has also been used as a basis for contemporary choreographies. 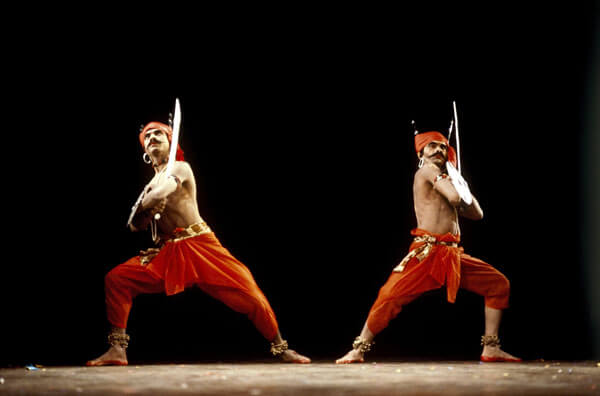 The sub-genre of chhau, which most clearly reveals its origins in the martial arts, is Mayurbhanj chhau, preserved in Mayurbhanj, in the state of Orissa. It evolved under local royal patronage.

In this type no masks are used. The dancers, however, keep their faces stiff and expressionless. The performers are non-professionals, although vigorous training is, of course, required before they are able to attain the extremely powerful, even rustic, movement technique of the genre.

Some of the themes of Mayurbhanj chhau seem to hint at the ancient origins of the tradition. They include hunters’ dances, dances based on animal movements, while some dances seem to stem from the ancient tradition of weapon worship. 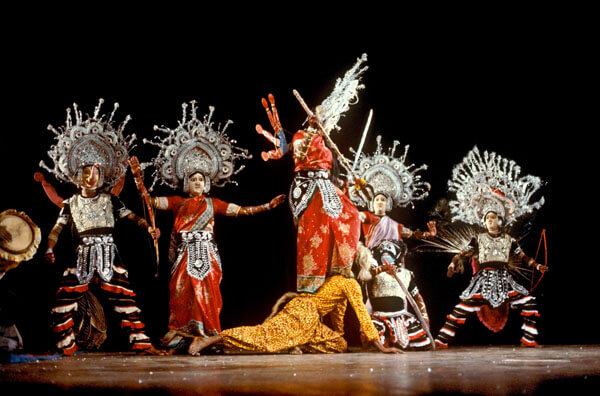 Purulia chhau originates from the region of Purulia in West Bengal. Its roots lie in the annual Sun Festival, celebrated in March–April. Nowadays it is also performed on other occasions and during the last few decades it has become renowned both nationally and internationally.

Like other forms of chhau, the Purulia variant is traditionally performed by non-professional male dancers and its extremely dynamic technique is based on martial arts. It was originally performed on a stage area on the ground, and the audience sat in a circle around it.

The performance starts with a song of invocation dedicated to God Ganesha. The dance-dramas are epic in character and derive their plots from the great epics, the Ramayana and the Mahabharata, and the Puranas. Purulia chhau focuses only on their heroic episodes. Thus, the rasas or sentiments of the dramas are those of the heroic and the furious. 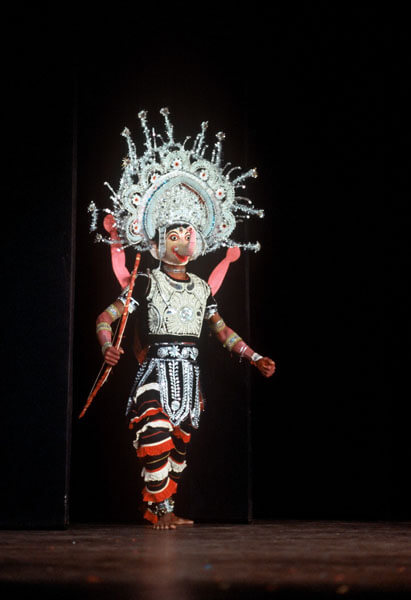 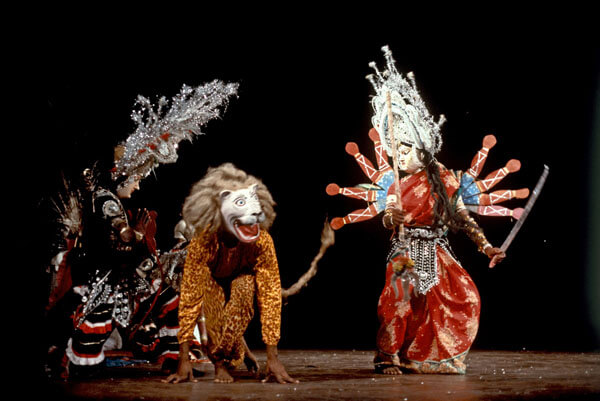 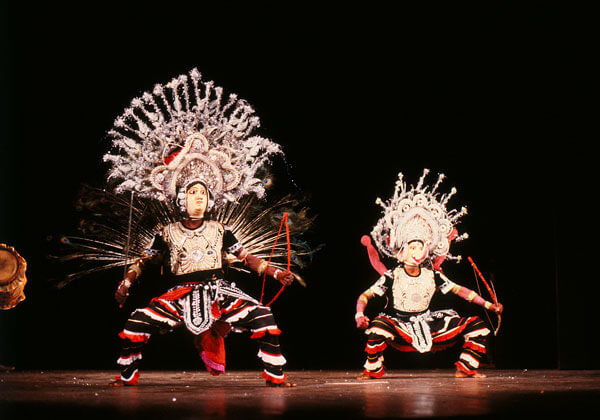 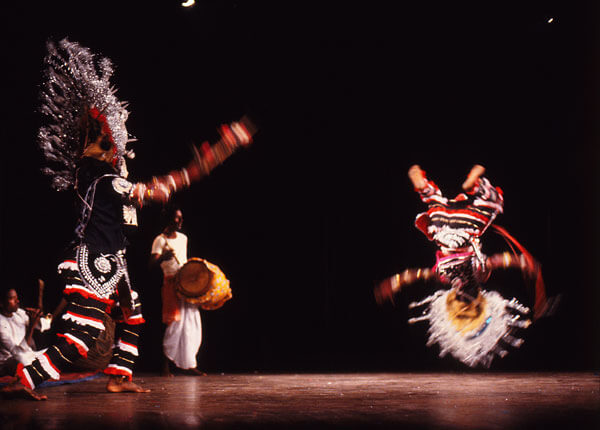 The masks, made of cloth covered with plaster, are very colourful, and derive their style from the religious imagery of the region. The headgear of some characters, made mainly of feathers, may be one metre high.

In Purulia chhau the movement technique that was originally derived from martial arts is taken to its extreme limits. The characters slide on the stage with the peculiar movement technique characteristic of chhau. The battle scenes are fireworks of high jumps, leaps, and somersaults. At the end of a battle scene the action suddenly freezes to a tableau highlighting the victory of good over evil, much in the style of the altar installations of the region. 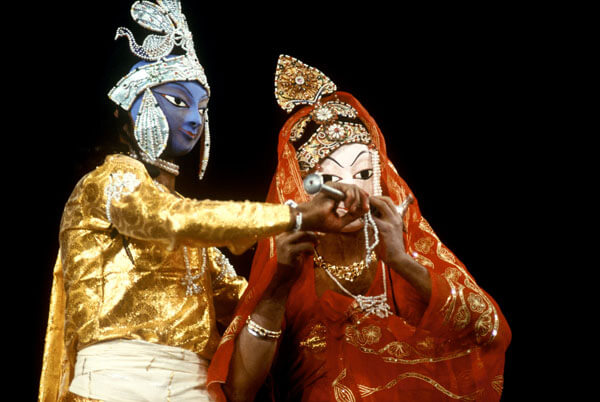 Krishna and Radha in a Seraikela chhau performance Sakari Viika 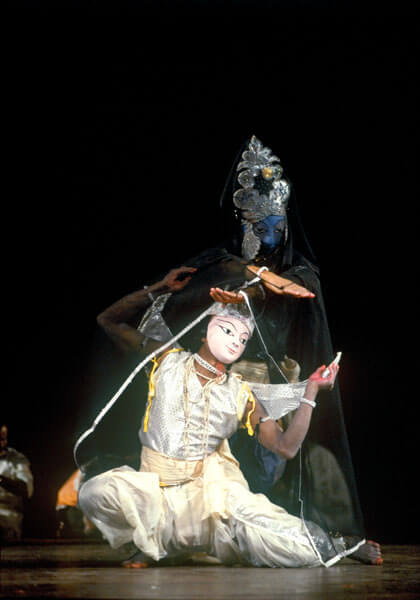 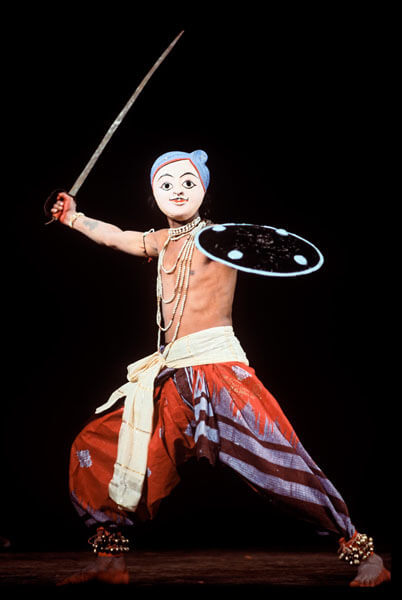 The martial roots are overshadowed by lyric-dramatic tendencies. Seraikela chhau consists of a series of short, 7–10-minute-long dance-dramas, in which the dancer impersonates animals, birds and even a rainbow, planets, trees, seasons etc. Although mythological themes may be depicted, Seraikela chhau is the only form of chhau that is not religious in character.

Compared with the two other chhau types, Seraikela chhau is very soft in style. However, all the dancers are men, but most of the themes are performed in the feminine lasya style. Even the masks, made of layers of local clay spread on layers of cloth and paper, have pastel shades. The costuming consists of glittering fabrics and transparent veils emphasising Seraikela chhau’s fairytale-like character.