Therukoothu, The Street Theatre of Tamilnadu 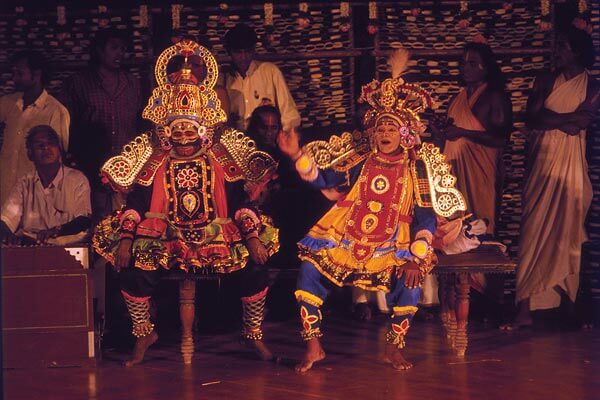 Thertukoothu (street theatre) is, as its name indicates, a popular form of theatre performed in the streets. It is getting rare and it is mainly practised in the poor areas of Chennai (formerly Madras). This operatic form is slightly influenced by the kathakali of Kerala. Therukoothu is, however, performed by amateur actors, who make a small financial contribution to the troupe in order to be able to participate in the performance.

The Plays, the Troupe, and the Music

The stories are derived from the Puranas, the Mahabharata, and the Ramayana. Songs predominate, while much of the dialogue is improvised. The troupe consists of 15 to 20 actors, accompanied by a vocalist and the instruments of a small orchestra that include drums, pipes and cymbals. Most of the melodies are Carnatic (classical music of South India) ragas. An obligatory chanting section precedes the actual songs.

The performance is led, as in so many other Indian theatre genres, by a theatre director or a master of ceremonies, who in this style is called kattiakaram. He is present on the square acting area throughout the performance. 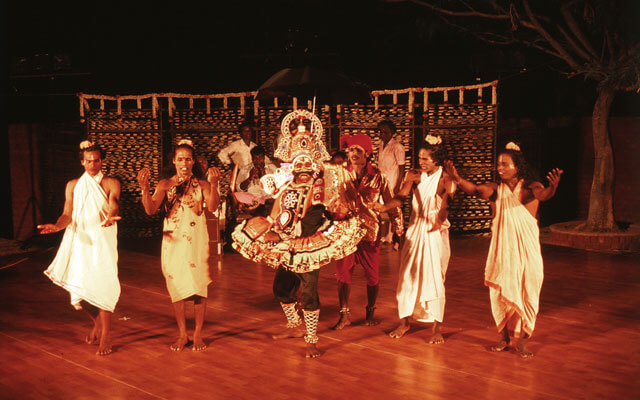 The performance is preceded by obligatory ritual preliminaries including the veneration of God Ganesha in the form of an elephant-masked dancer. After that follow invocations to other gods. The play usually starts with a scene at the king’s court. The main characters are introduced from behind a hand-held curtain.

Besides the leader of the troupe, another important character is kumali, the buffoon. The general acting style echoes the classical abhinaya mime, although, just like kathakali, hyper-realistic details, such as eating the entrails of the villain, are popular.

The Costuming and the Make-up 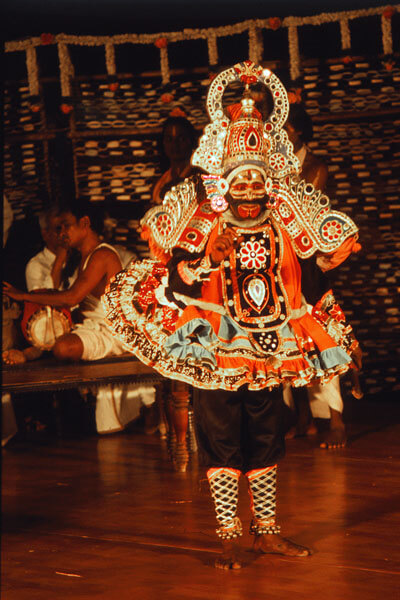 The fantastic costuming gives therukoothu its picturesque character. The upper body is covered with a jacket, while a knee-length skirt covers the lower body. Huge crowns, chest decorations and other ornaments are made of gilded wood and decorated with shining, coloured mirrors. Massive, wing-like shoulder decorations give the actors a kind of non-human, square shape.

Bright colours dominate the make-up. Krishna’s face is green, while another character has bright blue make-up. The villains’ faces are covered with horrendous black and white three-dimensional dots. Some characters wear masks.