The Burmese are believed to have arrived in their present territory in the 9th century AD. The former inhabitants of the country were the Khmer-related Mons, and the Pyus, whose kingdoms flourished in the Irrawaddy River basin from the early centuries AD to the 9th century.

When one considers how little is known about the early Pyu culture in general, it is exceptional that written evidence about the Pyu dance exists. It is recorded in the Chinese annals. A troupe of Pyu dancers and Mon musicians were sent to the court of Tang China in 801. The chronicles give a full description of the instruments used in the performances as well as of the materials of the costume and ornaments worn by the performers. The dances were performed by groups varying from two to ten dancers, among whom were tattooed men. The performances were received with great appreciation by the Chinese court, and minor titles were bestowed on the group leaders. 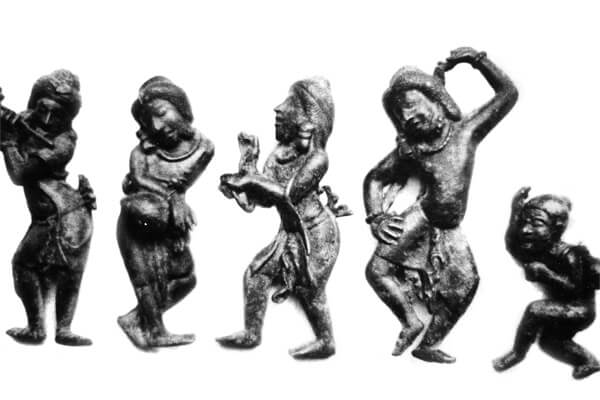 Pyu dancers and musicians, c. 6th–7th centuries. Reproduced from a photograph in the Rangoon National Museum by Jukka O. Miettinen

Visual evidence of Pyu dance also exists. Perhaps the best-known Pyu metalwork, now in the collections of the National Museum in Yangon, consists of five separate bronze reliefs, approx. 15 cm in height, depicting three dancing musicians and two dancers. They are dated to c. the 6th and 7th centuries. Two of the musicians are clearly depicted with their instruments: a flute and a pot drum. The third musician evidently plays the cymbals. This kind of small standing orchestra playing the above instruments was often shown in Indian dance reliefs from the 7th to the 12th centuries.

On the left-hand side of the Pyu dancer there is either a child or a dwarf performer who seems to comically comment on the actual dancer. His facial features do not show any child-like qualities and thus the figure could be a dwarfish jester, common in Indian theatrical practices. The principal dancer is in a lively position with an uplifted right foot and a bent body, the left arm bent upward and the hand almost touching his ear. The positions of the legs and feet clearly resemble Indian dance. However, the angular arm movements as well as the bent body bear undeniable similarities to the technique of the present dance tradition of Myanmar.

The Classical Age of Pagan, The 9th–13th Centuries

Pagan, at a bend of the Irrawaddy River in the dry zone of Upper Burma, is, with its almost 3000 recorded brick monuments, the world’s largest archaeological site related to Buddhism. During its heyday, in the 11th to 13th centuries, it was a big, international metropolis and a centre of political and religious life. The murals of the temples suggest that monasteries and palaces made of teak as well as more modest bamboo houses, such as those that can still be seen in remote villages, were scattered among brick-constructed religious monuments. The founders of the greatness of Pagan were Burmese who are believed to have emigrated from South China to the Irrawaddy river area at some time in the 9th and the 10th centuries.

Dance images in Pagan’s temples are numerous indeed. They are executed in all the media known in Pagan art, i.e. as stucco reliefs, glazed tiles, wooden reliefs and, above all, as murals.

They reveal that the dance tradition of Pagan was related to the traditions of the East Indian and Sri Lankan Buddhist world. The dancing figures can appear as independent motives in the temple murals. They are often also integral elements in the narration of the Buddhist didactic Jataka stories, so they also form a central theme for the later visual and theatrical arts of the whole region. 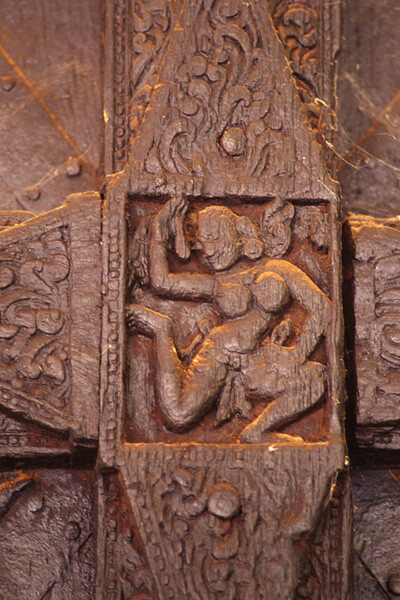 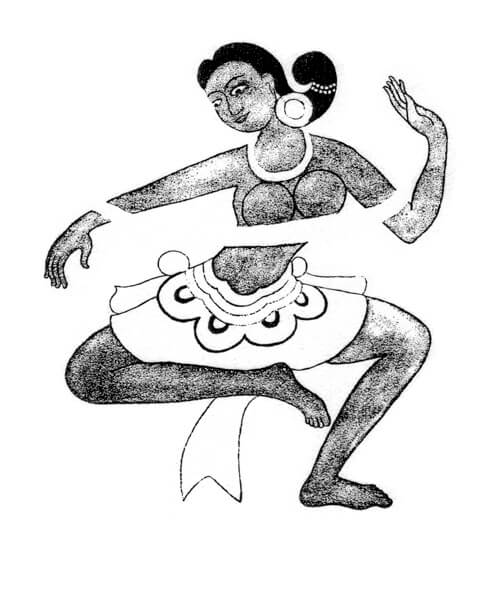 Female dancer, copy of a mural National Museum of Pagan

A common theme among the dance images is dancing musicians. Sometimes they are shown together with dancers who are taking part in a celebration, such as a religious procession. The male musicians play instruments, such as drums, conch shells and cymbals and they are portrayed in extremely energetic poses in the stretched, wide open-leg position, which enables them to change the weight of their body from side to side. The impression is that of a lively, dynamic dance.

The dancing musicians belong to the same widespread genre of processional dances which lives to this day, for example, in Manipur, bordering Burma, and in Sri Lanka, with which Pagan had close religious contacts. In Manipur the processions are performed in a Hindu context, whereas in Sri Lanka they belong to the same Theravada Buddhist tradition as in Pagan. The most famous of the many Buddhist processions of Sri Lanka is the annual Kandy Perahera, during which the revered relic, the Buddha’s tooth, is brought out of its temple and carried by an elephant around the city of Kandy. The majestic procession is accompanied by dancers and dancing musicians. The instruments played by the musicians are similar to the ones in the Pagan murals.

Many of the dancers of the murals, most often females, shown as dancing either together with the musicians or alone or in a group formation, are depicted in the standard position with open-bent legs and one uplifted foot. This position is one of the most widespread features adapted from the Indian tradition to Southeast Asian traditions. Some of the female dancers are shown in more complicated positions, which recall the poses of Indian classical dances, such as the bharatanatyam of Tamil Nadu or the odissi of Orissa, East India.

One speciality that gives present-day Burmese dance its specific character is the angularity of the arm movements. According to the Pyu dance image discussed above, this quality seems to have been already present in the Pyu period. As in other fields of the arts, the Pyu influence was also felt in music, as is shown by an inscription written to commemorate the building of King Kyanzhitta’s (1084–1113) palace. It informs us that during the celebrations people were “singing Myanma songs, Mon songs and Pyu songs”. Thus it seems most plausible that the Burmese also adopted the Pyu dance tradition during the Pagan period, which thus forms the earliest known layer of the dance tradition of the Myanmar of today.

Kingdoms of Upper Burma, The 17th to the 20th Centuries

The Mongols invaded Pagan in 1287, bringing its culture to a sudden end, while the metropolis was nearly abandoned. The Burmese did not regain control of their territory until some two centuries later. In the intervening period, various Mon- and Tai-related Shan kingdoms arose, but these were finally subdued by the Burmese in the 16th century from their capital at Toungo. This marked a new period of Burmese expansion, when they conquered the Thai capital of Ayutthaya for the first time, taking the Thai king to Burma as their prisoner. Burmese rule extended as far as Laos.

Like many other Southeast Asian kingdoms, the Burmese often moved their seat of power. For a while, the capital was at Pegu, an important crossroads of sea routes in Southern Burma. In 1635 Ava in Northern or “Upper” Burma became the new capital. It had been the capital since the 14th century, and it regained this status again in 1765. Its name became so closely associated with the whole country that Europeans began to call Upper Burma the “Land of Ava” and its government as the “Court of Ava”, regardless of where the actual capital was.

A group of subsequent capitals in Upper Burma grew during the centuries: Ava, Sagaing, Amarapura and Mandalay. A new period of unity began when the Konbaung dynasty rose to power in 1857 and Mandalay was chosen as the new capital. However, its short heyday was ended by Anglo-British wars in 1885. During the Konbaung period many of the court traditions were crystallised in their final forms. 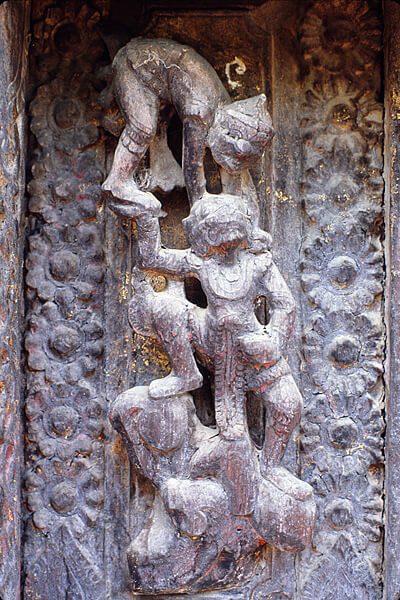 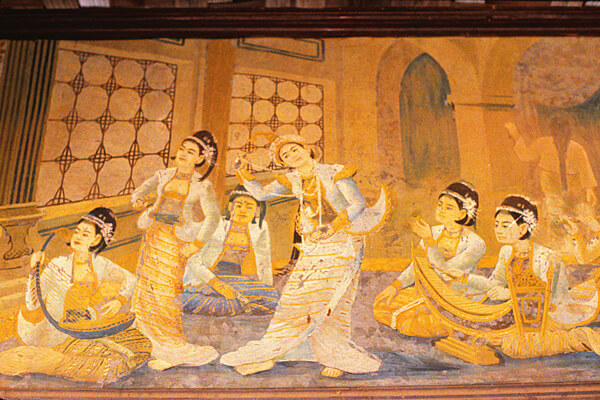 Female dancer, copy of a mural National Museum of Pagan

The end of the 18th century and the beginning of the 19th century is generally regarded as the “Age of Triumph” because Burmese political power reached its zenith after the sack of the Thai capital Ayutthaya in 1767. The city was razed, and works of art, artists, musicians and dancers were taken to Burma together with the imprisoned court of Ayutthaya. The following period is regarded as the “Golden Period of Burmese Drama”. The Ramakien, the Thai version of the Indian Ramayana epic, and other drama material were adopted from the Thais. In Burma the Ramayana had previously been known only in the form of Buddhist Jataka stories. Thai artists were greatly valued and Thai dance and theatre had a great impact on Burmese theatrical arts. Even today the Thai-influenced dance style is still known as yodayar, which refers to the city of Ayutthaya.

Burmese culture developed throughout capital cities in Northern Burma in rapid succession, while British colonial rule tightened its grip on the surrounding areas. The court culture of Burma achieved its present forms in Ava (1823–39), Amarapura (1837–59), and finally in Mandalay (1857–85). During this period the Burmese came into open conflict with the British, who ruled over large areas of India. This led to the Anglo-British wars of 1826, 1852, and 1885. The British first took Rangoon (now Yangon), which became a typically British colonial centre with colossal government buildings made of stone, harbours, and parks.

In spite of his many attempts at reform, King Mindon (1853–78), one of the most illustrious rulers in the country’s history, was not able to resist the British. In 1866, during the reign of King Thibaw, Mindon’s son and a less capable ruler, the whole of Burma came under British rule. Eleven years later Burma became a province of British India. The colonial period was a difficult one for both the country’s economy and its culture. The British exploited Burma’s natural resources, and much of the court art with its splendid traditions of theatre and dance disappeared entirely.

Burmese nationalism and patriotism arose in the late 19th century, finding initial support among the Buddhist monks (sangha), who traditionally had a central role in society. As elsewhere in Southeast Asia, World War II and the Japanese occupation were politically oppressive times.

Burma declared its independence in 1948, and it became the only country in the world to combine Buddhism with socialism. Political turmoil erupted again in the 1980s when the central government, various power groups, and some of the country’s numerous ethnic minorities came into open conflict. The ruling military junta continues the policy of isolation still today.

Despite the considerable damages of colonial rule to Burmese court traditions, Myanmar is still the home of many unique traditions of music, dance, and theatre. Neighbouring India has had a considerable influence on dance and music, although this influence was probably absorbed over many centuries. The Burmese musical tradition, for example, includes archaic instruments of Indian origin that have not been used in India for centuries. Like other indigenous orchestra types in Southeast Asia, the Burmese orchestra (saing) consists mainly of percussion instruments, such as gongs and series of tuned drums. 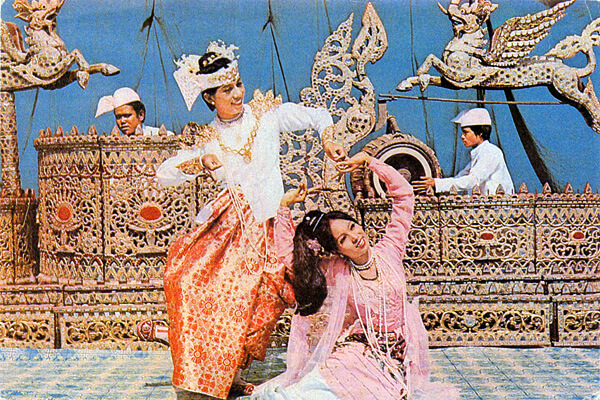 Dance of the Prince and Princess performed in front of a traditional saing orchestra Historical postcard, in the collection of JOM

All traditional forms of theatre in Myanmar are performed by dancing. The main plot material is based mostly on the Buddhist Jataka stories or the Indian epic Ramayana. Shamanistic ritual performances, consecrated to the spirits (nat), seem to present the oldest strata of indigenous theatrical tradition in present-day Myanmar.