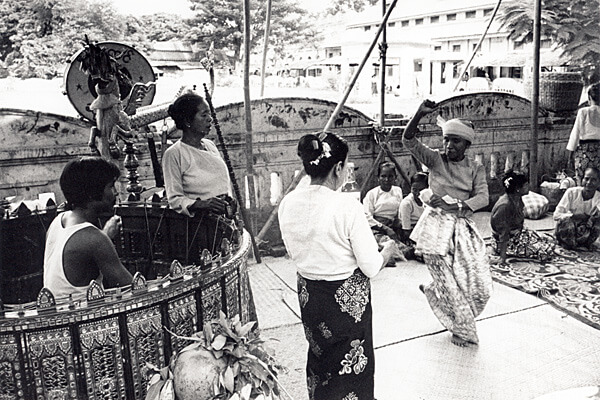 As in many Southeast Asian cultures, so too in Myanmar an ancient animistic belief system exists side by side with the official main religion, in this case Theravada Buddhism. Spirits are called nat in Myanmar, and the nat spirits were already canonised very early on. There are altogether 37 nat. They may be the spirits of exceptional, deceased persons or localised variants of Hindu deities. One example of the latter is Deva Indra Sakka, the king of the nat, who can be recognised as Indra, the head of the Hindu pantheon. The nat are traditionally the protectors of homes, villages, towns, mountains, and forests, although they have also been given Buddhist connotations.

The nat cult has many features that resemble shamanism. In the Burmese nat cult, the priestesses, as well as priests, fall into a trance, during which they act as oracles or healers to the community that commissioned the ritual. An event of this kind is called nat pwe (pwe = play or performance). Despite the fact that the cult is very archaic, the nat priests are organised, which is rather rare in Southeast Asian animistic systems.

The centre of the nat cult is Mount Popa, near Pagan, and the main annual event is held in Taungbyon near Mandalay, where dozens of nat pwe groups gather for their rituals. These rituals can also be performed at other times, for example in a Buddhist temple compound, or in private homes or shops, which are converted into nat shrines with temporary altars and statuaries.

The ceremony is accompanied by a small, traditional percussion orchestra, which signals the event with its dynamic music. Fruits, food, cigarettes, rum, and beer are offered to the nat statues, after which the nat pwe gradually starts. One or more nat priests with their assistants arrive on the scene, dancing in a relaxed manner and partaking of the offerings.

The principal priest performing the actual ritual wears a simple garment, such as a shawl, or a headgear, indicating which nat he or she will be in contact with during the ritual. The priest dances ecstatically, repeating simple steps and moving arms and hands in a manner typical of Burmese dance. However, in nat pwe, as in so many possession rituals around the world, dancing skill is of only secondary importance.

The priest sings while dancing and recites scenes from the life of the nat being portrayed. At the climax of the ritual, the priest falls into a trance and “becomes” the nat in question. Still dancing or sometimes whirling half-consciously on the ground, the priest announces prophecies to the assistants, who interpret them to the audience. 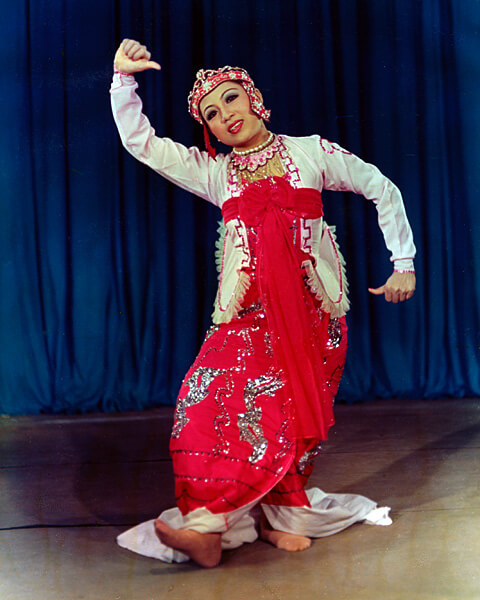 Dance of the nat priestess performed by a classical dancer Embassy of Burma, Moscow

Nat pwe ceremonies can still be seen frequently, and a short nat ritual is almost always part of a traditional theatre or dance performance in Myanmar. A performance usually begins with the dance of the nat priestess. In classical productions, lacking the element of trance, this dance is performed by a skilful professional dancer and it is more refined than in the authentic, often powerful, nat pwe rituals.