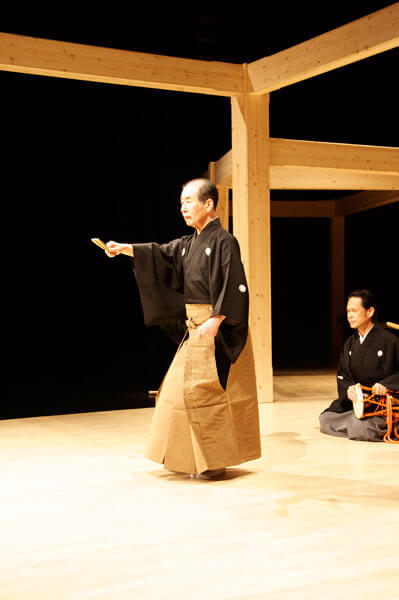 The still thriving tradition of archaic kagura (god-performance) dances is deeply related to Japan’s earliest belief system, Shinto. Once strictly a form of ceremonial art, kagura has evolved into various forms over the course of a thousand years. Some of these forms are still related to Shinto shrines, and some to court practices, while many of the dances are linked to the rhythms of the agricultural calendar. Some of the forms employ masks, while some forms, more theatrical in character, involve storytelling and the re-enactment of stories.

The origin of the kagura tradition is not completely clear, but it is suggested that it predates Noh theatre, which evolved at the turn of the 14th century. Japanese epics relate kagura to the mythical dance of the maid Uzume in front of the Sun god’s cave, as mentioned above.

Originally, sacred kagura dances were performed by shrine maidens. Later, the dances inspired many forms of popular ritual dances, which were based on earlier folk forms. Over the centuries various forms evolved, including forms of dance-drama and also completely secular variants.

The originally court-related kagura dances are called mikagura. They were performed in several sacred places, such as the Imperial Sanctuary and various Shinto shrines all over the country. They also formed part of the Imperial harvest festival, a practice, which still seems to continue in the secret in the Imperial Palace in Tokyo.

The folk forms of kagura, originally derived from the court variants and incorporated with various popular traditions, are called satokagura, or “normal kagura”. They include dances performed by temple maidens, who originally became possessed by gods. Now the dances are formalised throughout.

Most of the kagura dances are based on prototypes performed at certain Shinto shrines. Later these new variants also became popular in other parts of Japan. These kinds of kagura dances are related to particular ceremonies, such as ritual purification, the celebration of an auspicious day and to other temple festivals.

The kagura repertoire includes one version of the Lion Dance, performed by a dancer wearing a lion mask. Lion dances are known in many variations in several parts of Asia. Kagura also became used in the enactment of stories and thus some of its forms have a secular theatrical quality. In Edo kagura even evolved towards street performances, called daikagura. They involved acrobatics, various dances, juggling etc.