The short farces that are performed between the serious noh plays are called kyogen. Together, these two art forms are called nohgaku. Both forms have a lot in common. Both are performed on the same stage; in both forms all the actors are men, while they are both highly stylised in their styles of acting. However, in kyogen there is a tendency towards realism. 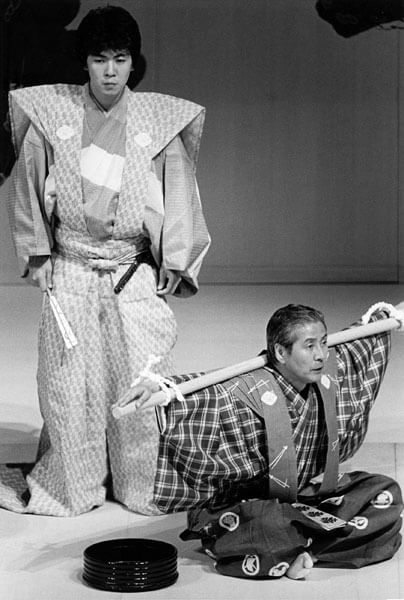 A master and his wily servant, Tarokaja, in a play called Tied to a Pole Jukka O. Miettinen

Masks are only rarely used in kyogen; the costumes are simple, and music does not have an important role. If instruments are used, they are played softly so that they do not disturb the dialogue. While noh describes emperors, warrior lords, gods, and ghosts, kyogen concentrates on common people, such as mischievous servants and their gawky masters. Even monks and ghosts are seen from a comical viewpoint.

Noh and kyogen evolved from the same older theatrical forms. Sarugaku was one of the roots of the traditions of both of them. In the hands of Kan’amis and Zeamis in the early 14th century sarugaku was refined to become an extremely sophisticated form of serious drama, whereas kyogen continued to cultivate its lighter aspects

Nohgaku, the combination of noh and kyogen, was the entertainment of the samurai class during the Muromachi period (1333–1568) and the Edo period (1603–1868). An exceptional actor, Hie Mangoro further developed kyogen and founded two kyogen schools or lineages in the Edo period, the Okura and the Sagi Schools. The third lineage, the Izumi School, was supported by the imperial court in Kyoto.

As was the case with noh theatre, kyogen also lost its traditional patronage when the old feudal world crumbled at the beginning of the Meiji period (1868–1912). During the Edo period, the golden age of bunraku puppet plays and sensational kabuki, noh was still supported by the imperial court, while kyogen was regarded merely as an old-fashioned oddity.

One of the three kyogen schools, the Sagi School, was closed down, but the other two lineages, the Okura and Izumi Schools, quietly continued to cultivate their art. There was a turn for the better after World War II when many forms of Japanese traditional arts were revived. Kyogen’s popularity has increased during recent decades. It is still performed as an interlude for noh, while, at the same time, it is also appreciated as an independent art form.

Today there are some 260 plays in the kyogen repertoire, all of them anonymous. These short plays (of about 30 minutes) may be classified according to their subject matter. The classification differs slightly in the two existing kyogen schools, those of the Okura and Izumi Schools.

Probably the most popular character in the whole kyogen repertoire is a wily servant called Tarokaja (synopsis of the play Tied to a Pole). He and, occasionally, his fellow servant Jirokaja do all kinds of mischief, which leads to conflicts with his master. Both servants and master are mercilessly treated as comic characters. Thus it is not always clear who, in fact, is the clever one and who is the fool.

In addition to classifying the farces according to the main character of the play, another way to classify them is based on their endings. A play may be “resolved” or “unresolved”, according to whether the audience is shown what finally happens to, for example, the mischievous servant at the end of the play. These two basic categories are further subdivided into subcategories, such as plays ending with laughter, flute music etc.

The Actors, their Roles and Technique

Kyogen’s stylised body language and its acting technique are, to a great extent, similar to those in noh, including the same basic posture, sliding, walking etc. (see The Acting Technique in the chapter on noh).

However, as mentioned above, the acting in kyogen is slightly more realistic than in noh. One drastic difference between these two “sister” styles is that exaggerated facial expression is used in kyogen, while in noh the face is kept completely expressionless.

As kyogen mainly describes common people, its costuming is much more modest than noh’s. While in noh the actors’ socks are white, in kyogen they are yellowish. The music, including the chorus, both of which are of the utmost importance in noh, is only rarely included in kyogen plays. Thus the focus is on formally spoken dialogue. A speciality of kyogen’s language is the comic onomatopoeic words, which imitate the sounds created by various physical actions.

Rare and archaic forms of kyogen also exist that are practised outside the two main kyogen schools. They are mainly performed in certain temples in Kyoto. One of them, Mibu kyogen, is believed to have evolved as early as the early 14th century. 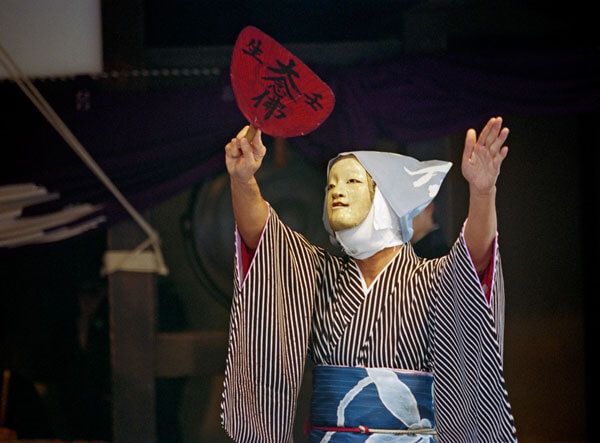 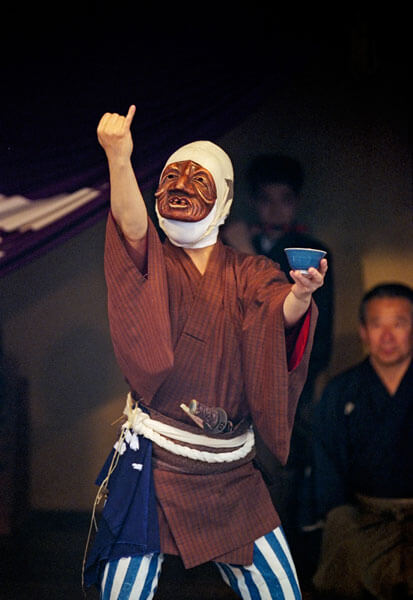 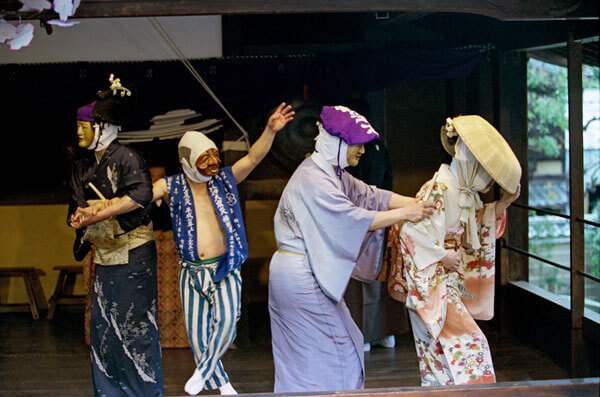 Mibu kyogen differs in its use of masks from mainstream kyogen, which is practised by the two kyogen schools mentioned above. Possibly because of the masks, the actors do not speak. Thus the drama is performed entirely as a mime, accompanied by a small group of musicians. As in kyogen generally, in this form, too, all the performers are men.

Nowadays there are some 30 Mibu kyogen plays. In spite of their clear entertaining quality these folk plays clearly have a moral, didactic purpose, as they often recount the punishments of various, less good deeds. It is believed that these masked mimes stem from older, archaic, now extinct, Buddhist mask plays.