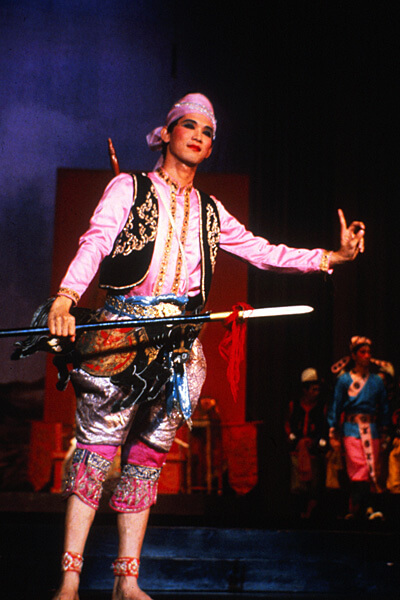 A male lead from a lakhon play in which local flavour is added by means of exotic costumes and stage realism Jukka O. Miettinen

Lakhon is an overall term referring to many forms of dance-drama in Thailand. It may derive from Java, where the plot of a performance is called lakon. The most archaic genre of lakhon is lakhon nora or nora from the Thai part of the Malay Peninsula, which will be discussed later. The most classical form is lakhon nai, developed at the courts of Ayutthaya and Bangkok and originally performed by royal maidens, while the popular form lakhon nok was originally performed by men. 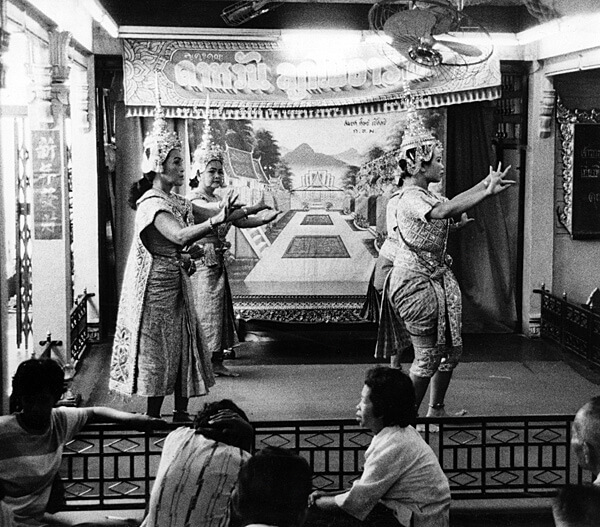 A ritual lakhon performance at the Temple of the City Pillar in Bangkok Jukka O. Miettinen

In the nineteenth century international influences and theatrical realism led to even other forms of lakhon. The various genres differ in plot material and in some performance techniques. While nang yai and khon illustrate the events of the Ramakien and are quite epic in nature, only one of the lakhon genres bases its plots on the Ramakien. In the others, the plots are derived from the ancient Buddhist Jataka stories and folk-tales. Thus the lakhon plays often have a distinct fairy-tale character.

Lakhon nai is the most classical form of lakhon dance-drama. It developed at the courts of Ayutthaya and Bangkok, and its name means the “inner theatre” referring to the fact that its performances were limited to the private quarters of the royal palace. Its history may be longer, possibly going back to the ancient dance-drama of the Khmers. The first written reference to lakhon nai, however, comes from the Ayutthaya period. 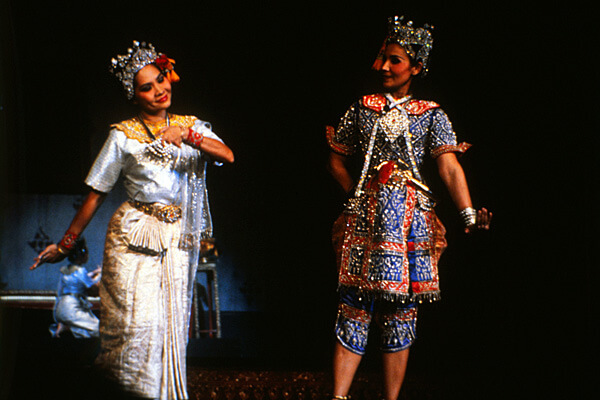 It was performed by the royal maidens of the king’s harem, and the performances could be viewed only by the king himself, his guests, and members of the court. It was not possible to use male actors in lakhon nai, as it was performed in the women’s quarter of the palace. At the beginning of the Bangkok period the Thai kings still kept large harems, to which vassals “donated”, mainly for political reasons, their beautiful daughters, who were taught classical dance in the palace.

In lakhon nai the plots are based on three story cycles: the Ramakien, the Unraut relating to the Hindu god Krishna, and the most popular one, the originally Javanese Inao, which was adopted in Thailand at an early stage. Inao is a Thai version of the extensive cycle of stories relating to the adventures of Prince Panji of East Java. It tells of the separation of Prince Panji, or Inao, from his beautiful bride, and the many adventures they experience in trying to find each other. The actresses recite their lines in gentle voices, but the demanding vocal sections are performed by a female chorus to the accompaniment of a traditional, percussion-dominated orchestra playing variations of stock melodies.

Lakhon nai employs the glittering standard costumes of Thai dance and the whole vocabulary of classical dance, of which the actresses must have full command. The dance style is approximately the same for both men and women, and there are thus no technical obstacles to women playing men’s roles or vice versa. When women perform as male characters, the masculinity of the dance is toned down, and the all-female cast gives the lakhon nai its characteristically graceful style.

The early stage of the Bangkok period was the golden age of lakhon nai, but Rama III outlawed it as well as other forms of court theatre in the first half of the nineteenth century. The khon mask-drama recovered from this brief ban, but it was difficult for lakhon nai to survive, and it lost popularity in the late nineteenth century when realism came to the fore. At present, the College of Dramatic Arts in Bangkok and the National Theatre of Thailand maintain both traditions, although full lakhon nai performances are rarely staged.

Lakhon nok is a popular form of dance-drama, which, unlike lakhon nai, was originally mainly a product of the common people, and it is closely linked to the Buddhist temple fairs, although the palace also had its own lakhon nok groups. It was originally restricted to male actors, usually professionals. Since the early nineteenth century women have been permitted to perform female parts. There are dozens of lakhon nok plays, usually dramatised versions of the Buddhist Jataka stories or folk-tales. Here, as in all genres of lakhon, the performances have a distinct fairy-tale quality. The plays depict the trials of noble princes, and adventures in demon-infested forests with Hindu deities and spirits taking part in the action.

A very popular lakhon nok play is a dramatization of Phra Law, an ancient story of tragic love, which is known to all Thais. It has been attributed to King Boromo Trailokanat (1448–1488) or King Narai (1657–1688). It is the tale of a young prince, Phra Law, who is handsome and loved by all. He is married to a princess equally perfect, but a mysterious restlessness erodes the prince’s peace of mind. Driven by these feelings, he flees his palace, finally arriving in the kingdom of his father’s enemy, where he meets two princesses. They fall passionately in love, and the princesses hide Phra Law in their chambers, where they enjoy complete and perfect happiness. The girls’ grandmother finds out that the son of her archenemy is hiding in her palace, and orders her servants to kill Phra Law. In the ensuing fight, all three young people are tragically killed. During the cremation ceremonies, the two enemy kings, the fathers of the victims, become reconciled. 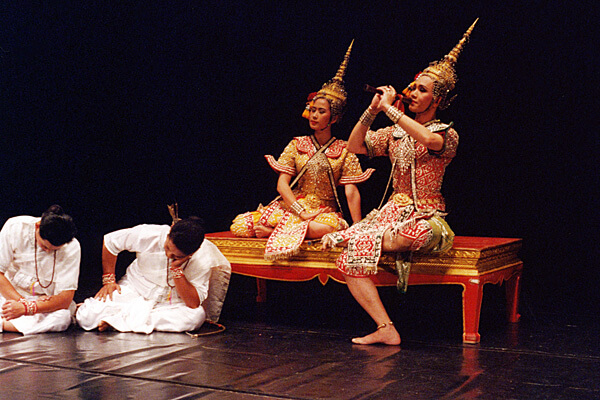 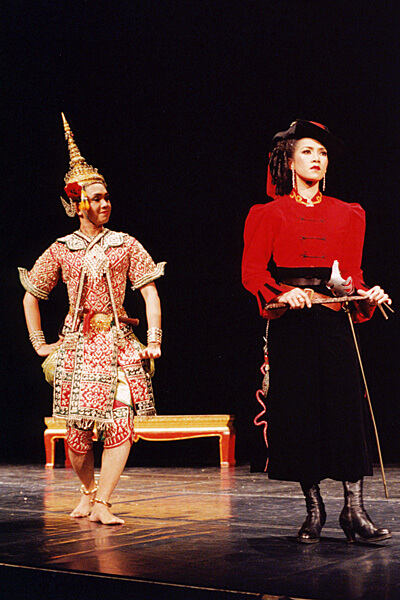 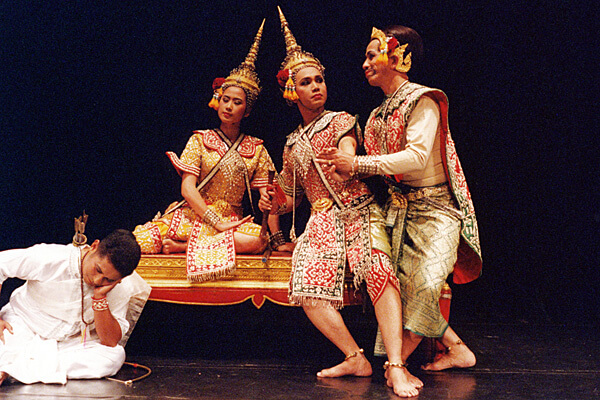 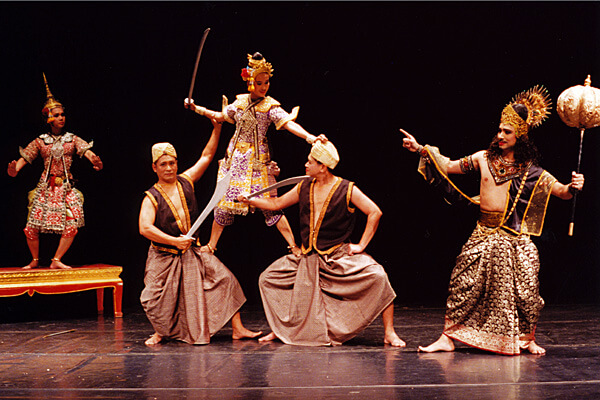 
Phra Aphaimani is probably the most beloved of all the epics staged as lakhon nok. It was written by Thailand’s foremost court poet of the early Bangkok period, Sunthorn Phu (1786–1855). He worked during the first five Chakri rulers, but temporary lost his position and favour. While imprisoned by King Rama II he wrote Phra Aphaimani, which is based on diverse sources including several Buddhist Jataka stories. The main theme involves the education of the Don Juan-like hero, the flute-playing Phra Aphaimani, in several fantastic places. His adventures include, among others, service in a foreign army, a meeting with a Western heroine, and a marriage to a sea monster. 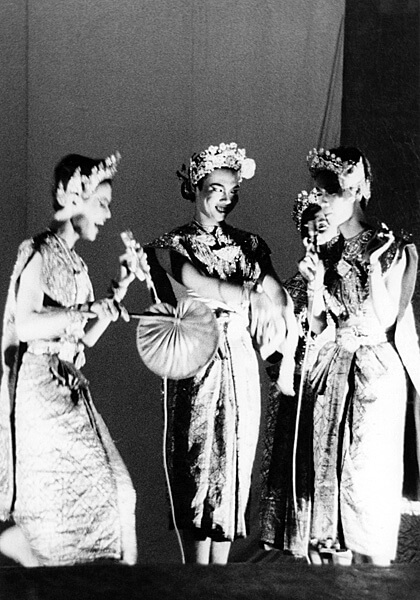 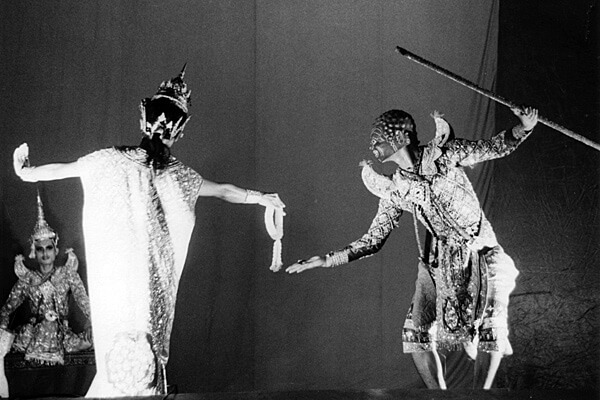 Sang Thong, based on a widespread Asian legend, is another popular plot for lakhon nok. Its earliest Thai version dates from the Ayutthaya period in the seventeenth century, but the commonly used drama version is from the beginning of the nineteenth century, when Rama II and his court poets adapted the tale to court tastes.

Sang Thong, like other lakhon plots, is very complex, and the actual performances usually consist of only one or two acts, as the overall context is known to the audience. Lakhon nok has many features in common with lakhon nai, although its music has a faster tempo, and dance skills of a classical standard are not necessarily required. Sometimes it even includes parodic references to the classical court tradition. There are also differences in the vocal parts because this tradition permits the dancer-actors themselves to sing.

The costumes in lakhon nok are mainly based on classical dance attire, although some characters, such as Sang Thong in the black man’s disguise, wear masks. At the peak of its popularity at the end of the nineteenth century, lakhon nok was being performed in almost a hundred casino-theatres around Bangkok. It was naturally affected by the tastes of the common people, with a stress on the comic aspects and a free interpretation of the theme. The sets make full use of illusionistic effects with painted backdrops and modern lighting. The National Theatre of Thailand and theatre groups in the universities still perform lakhon nok from time to time.

The age of Western theatre and cinema led lakhon to develop in a more realistic direction, creating lakhon phud or spoken lakhon. There was also an operatic, completely sung, form of lakhon. During the reign of Rama V (1868–1910) Thai classical dance was revived, although it received strong foreign influences at the same time. This led to lakhon phantang, where foreign influences such as “ethnic” costume and Chinese martial arts were adapted to basically Thai-style dance-drama. 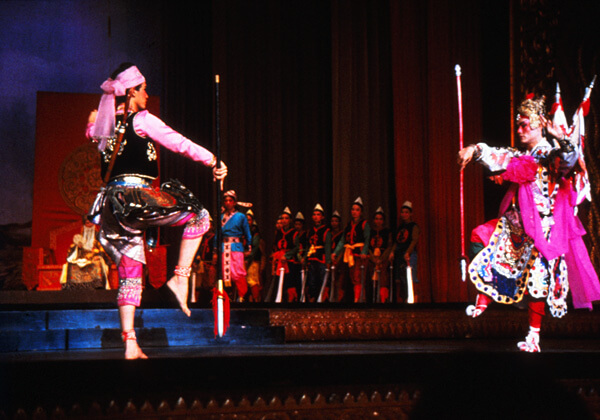 A battle between a Burmese hero and a Chinese general in a lakhon phantang performance of Saming Phra Ram Asa Jukka O. Miettinen 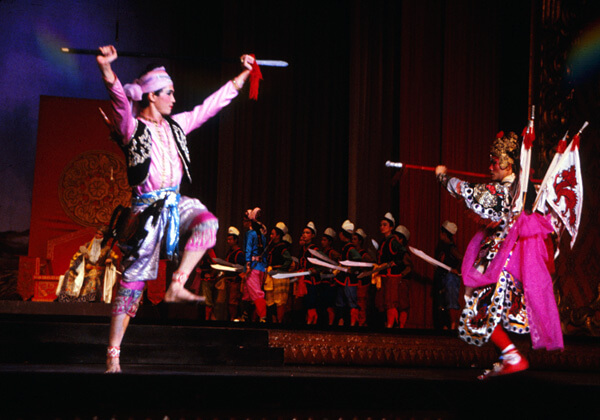 A battle between a Burmese hero and a Chinese general in a lakhon phantang performance of Saming Phra Ram Asa Jukka O. Miettinen

A well-known example of the lakhon phantang style is a play called Saming Phra Ram Asa. It is part of a larger work called Rajathirai, describing the many conflicts between the Burmese and the Chinese in the fifteenth century. The various nationalities wear their own costumes; for example, a Chinese general, displaying his martial arts in the fighting scenes, is dressed in Chinese opera costume. Thus, one branch of lakhon developed as a historical play with its requirements of naturalism and “local flavour” in somewhat the same way as Western theatre did in the nineteenth century.