Legong, Dance of the Maidens

Legong is probably the best-known form of contemporary Balinese dance theatre. It is worthy of this reputation, as this form of dance-drama, performed by mostly three girls, represents the classical standard of Balinese female dance. Legong was created at the turn of the eighteenth century by combining elements from older traditions such as gambuh and the sanghyang dedari trance dance with its many ancient animal movements.

Early in its development a variant of legong was performed by young boys, but it was rechoreographed for girls by royal command. The pre-adolescent girls were chosen from nearby villages, and they served as legong dancers until puberty. Present-day tourist shows, however, mainly employ adult dancers. 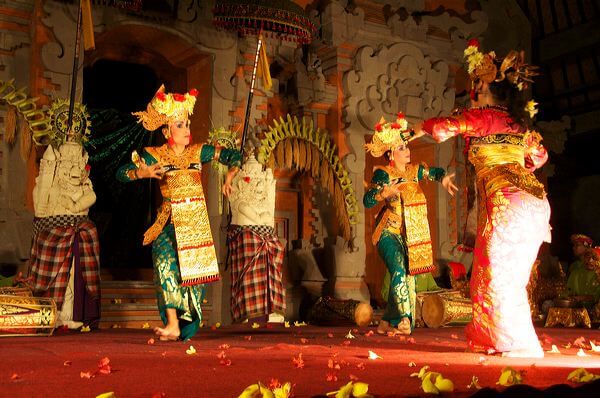 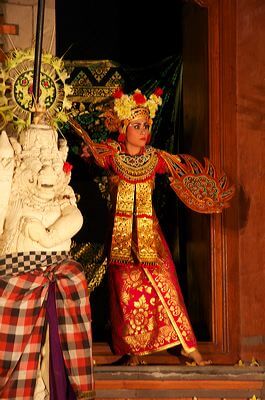 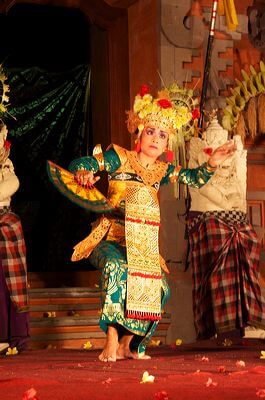 The standard plot of legong is based on a cycle of East Javanese tales relating to the adventures of the legendary Prince Panji. Legong is, however, an implicitly abstracted form of dance theatre, and the various events are vaguely alluded to.

It usually concentrates on only a fragment of the whole tale, where the King of Lasem has kidnapped Princess Rangka Sari, who has fallen in love with Prince Panji. The king tries to win the heart of the beautiful princess, but she does not respond to his advances. The princess demands that the king beat Panji in battle. The unhappy king goes off to the battlefield, but on his way he meets a crow, the bird of ill omen. The king arrogantly strikes the bird with his fan and thus seals his fate in the coming battle with Panji.

One of the dancers plays the princess, another has the role of the king, and a third plays both a servant and the bird. All three dancers wear the same standard costume in which the waist and back are enclosed tightly in a long belt of fabric with a long skirt covering the legs. The material of the costumes is typically gold- embroidered dark green or violet fabric, originally derived from court dress.

The dancers also have a wide collar of gilt leather and headgear of the same material, which is decorated with fresh flowers. They usually have fans in their hands, and the dancer in the role of the bird has gilt wings. In the original court performances the dancers wore gold ornaments and headgear with jewels.

The dancers do not speak or sing themselves, and the lines are presented by singers among the orchestra. Legong is accompanied by an exceptionally old type of sweet-sounding gamelan. The dance is based on gambuh, but the special features of costume, the tightly wound waist and the narrow lower part, create a different aesthetic for the dance.

The legs are bent forward with the torso also leaning forward. Delicate movements of the head and tensed arms are characteristic of legong. An aesthetic concept of tropical insects and animals may account for the way in which the dancers’ fingers tremble like antennae when they are not handling their fans. The technique also involves the expressive eye movements, typical of Balinese dance but rare elsewhere in South-East Asia.

A legong performance traditionally begins with a complex introductory dance, followed by the drama proper and an abstract epilogue dance. The movements are fast, sometimes creating geometric floor patterns, and the characters communicate with rapid movements and expressions, ending at times in precise unison. The overall mood is almost feverish. 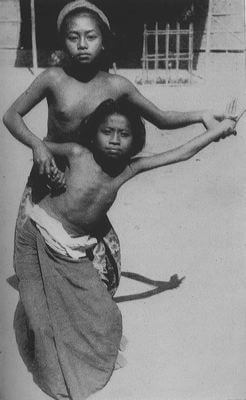 Legong dancers begin their training in early childhood. The demanding technique is taught by moving and twisting the girls’ arms, necks, and body until “the dance enters their innermost being”, that is, they learn it. Many villages have their own legong traditions, and at present the style is used not only for performing The Adventures of Prince Panji but for other tales as well.