There are two classic forms of mask theatre in Bali: the wayang wong and the topeng. Both contain features derived from the old Hindu court culture, which was adopted from Java. They developed into their present forms under the patronage of the Balinese courts in the seventeenth and eighteenth centuries, especially in the central court, which was first located in Gelgel and after the beginning of the eighteenth century in Klungkung. Their creation is associated with certain artists and artist families. The oldest mask sets are revered because of their sanctity and like old theatrical costumes they are passed on as family heirlooms.

Wayang wong (wayang: shadow, puppet; wong: man) dance-drama was created at the turn of the 19th century when the king of Klungkung wished to use his old, inherited masks in a new form of theatre based on the Ramayana. It was not, however, a completely new invention, being based on already existing forms of theatre such as the wayang kulit and the gambuh. Certain postures and gestures were adopted from shadow theatre, while gambuh provided the style of dance and even complete dance numbers.

Wayang wong is an impressive, large-scale form of dance theatre, in which decorative, slightly Chinese-influenced masks and large headdresses offer visual splendour. Actors sing their lines and dialogues in the Kawi language. As in other South-East Asian Ramayana-related drama forms, for example, khon of Thailand and wayang wong of Java, the noble heroes and heroines no longer wear masks. They are worn only by actors playing the demon and monkey characters. 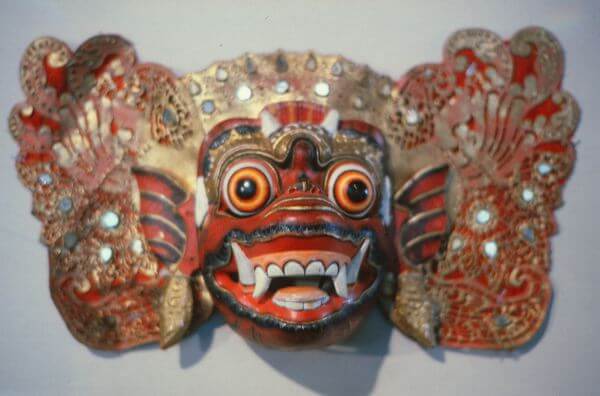 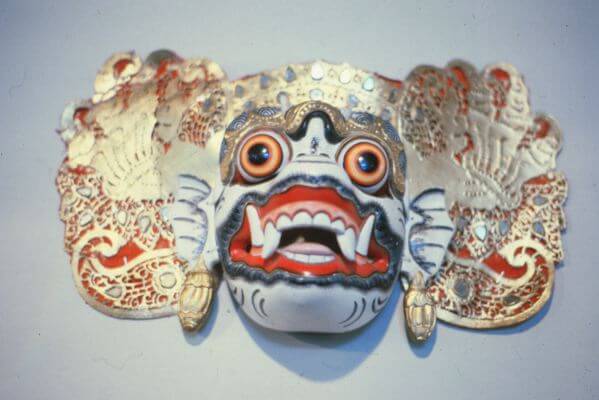 Monkeys have a central role in wayang wong. In Bali, monkeys have been revered as guardian spirits, and they have been the inspiration for many theatrical creatures, combining monkey features with elements of other animals, such as tigers or even birds. The monkeys’ pantomime-like gestures add a special flavour to the movements employed in wayang wong.

Along with the heroes, dancing in the pure classical style, the monkeys introduce positions and gestures based on animal movements adapted from earlier traditions. Despite their apparently relaxed nature, their execution is based on fixed choreographies. The cast of a wayang wong performance includes several dozen dancer-actors. Experienced professionals play roles such as the heroes and the demon-king Ravana, usually employing classical dance techniques, while the minor monster and the monkey characters are often played by amateurs.

A performance usually elaborates only a single episode of the Ramayana. The dialogue and the Kawi language have been adopted from shadow theatre, though in a simplified form. Wayang wong performances still have a ritual significance. Many of the masks, which in wayang wong also include headdresses ear ornaments and sometimes even wigs, are regarded as highly sacred objects. 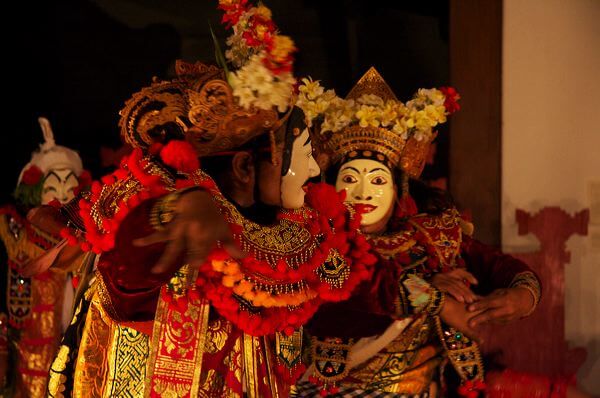 In topeng the movement technique derived from gambuh is combined with stylised masks Jukka O. Miettinen

Along with wayang wong, the topeng is another important form of mask theatre created in the central court of Bali. Here too, the old masks are venerated as sacred heirlooms believed to possess magical powers. Topeng can be described as a Balinese chronicle play with plots relating to the island’s history, ancient kings, ministers, and court intrigues.

There are two types of topeng. Topeng paiegan (paiegan: offering), also known as topeng wali, is performed by a single actor as a kind of monodrama, which is still regarded as having a profound magical-religious meaning. The performer is at the same time a priest and an actor. In the latter capacity he displays considerable virtuosity, changing his character and movements according to the masks used in the play.

The one-man topeng is still performed in various rituals, such as the filing of teeth, weddings, and funerals. In the historically younger topeng panca five actors appear. In both types, the action consists of a series of stock scenes presented in predictable order.

Balinese topeng came about in the seventeenth century, when a new form of dance-drama was created for masks inherited from East Java. The old masks are still revered to such a degree that they are very rarely used and may not be photographed. Over the centuries topeng became popular throughout Bali, and new mask sets were made. 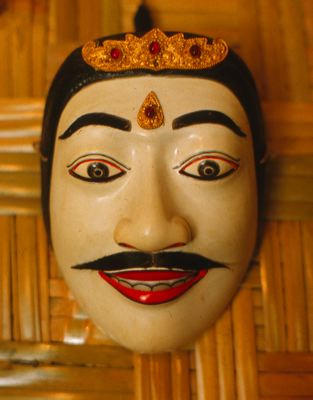 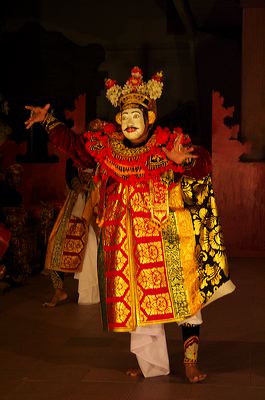 The movements of the king are noble and heroic Jukka O. Miettinen 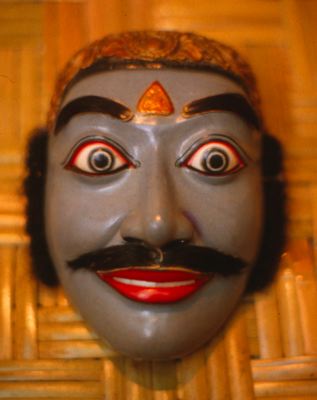 The mask of one of the ministers Jukka O. Miettinen 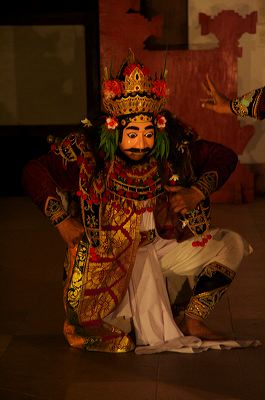 The movements of the ministers are expressive Jukka O. Miettinen

For dramatic action, the main mask types are the refined (alus), white-faced king (dalem), his white-faced consort, the strong large-eyed antagonist king, and a number of strong minister characters with face colour ranging from cream to grey and red. A comic touch is added by several grotesque clown masks, often portrayed as suffering from physical defects.

The masks of the clowns leave the mouth visible and cover only the upper part of the face, permitting the actors to present their lines. The task of the clowns is to describe the plot to the audience in the vernacular, as several languages are spoken in topeng, for example, classical Sanskrit and Kawi. 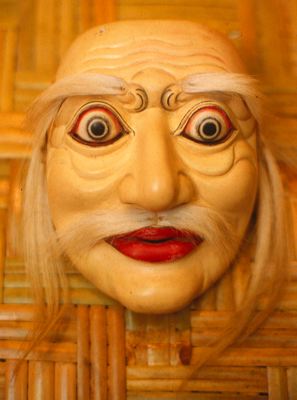 The mask of Tua, the old man Jukka O. Miettinen 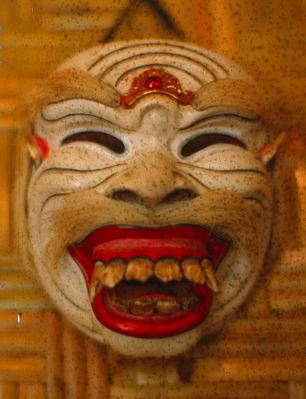 The masks of topeng include those for special characters such as jauk who are not directly related to the dramatic action of a performance. Some of the characters are presented in their own, separate introductory dances. One such character is the white-haired Tua, wearing a light-coloured old man’s mask.

In the one-man topeng the final mask is usually the smilingly grotesque Sidha Karya (the one who fulfils the task). It is a good example of the typically Balinese way of combining the grotesquely comic with the sacred. The mask of Sidha Karya, with its white face, buckteeth and almost mad smile, is actually the most sacred of all topeng masks. It is only when he wears this mask that the actor may recite the Sanskrit prayers. On the other hand, Sldha Kariya may behave in a very unruly manner, and small children in the audience are prepared for his well-meant teasing. 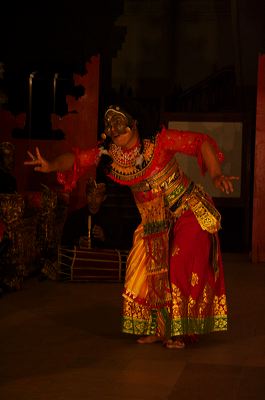 Comic female impersonator with a half mask Jukka O. Miettinen

The acting technique concentrates on virtuoso characterisation. The language of gesture is mainly based on classic Balinese dance derived from gambuh, although it varies greatly according to character. The noble king is always alert, the old man shakes and shudders absent-mindedly, and the red-faced minister with his broad movements represents the universal mood of wonder.

In the one-man topeng paiegan the dancer sets his mask basket in front of the gamelan, from where he chooses and dons the appropriate masks. The presentation of the stock characters thus provides the essence of the actual scenes. With its five actors, topeng panca, developed from the one-man topeng in the late nineteenth century, has smoothly flowing dramatic action without interruptions. Unlike the sacred topeng paiegan, the group topeng is a theatrical performance without deeper ritual significance.