Korea has several forms of mask theatre. All of them combine dance music, and spoken lines. The steps, movements and mask systems vary from region to region and usually the traditions are named after their birthplace.

All the forms of mask theatre include a wide range of caricature-like characters, covering the hierarchy of the Korean society of older times. The introductory parts of each mask dance, however, still reveal the roots of this art form in earlier exorcism rituals, as each dance starts with greetings to the gods. 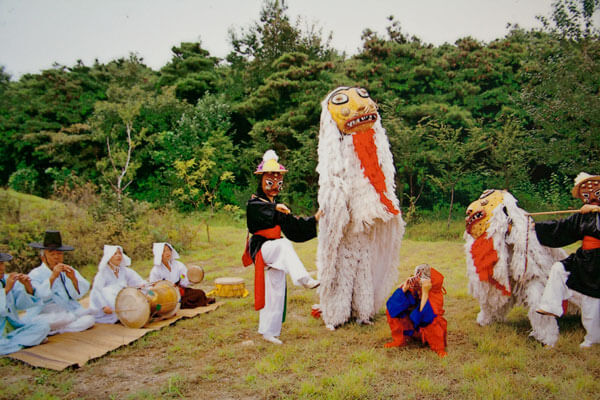 Forms of satirical mask theatre have been an important part of Korean folk culture Museum of Korean Traditional Music, Seoul

These various forms of mask theatre are called by the generic names either talchum or tal nori. All of them are rather improvisatory in character. Direct communication between the dancers and the musicians is common, while even the audience can, from time to time, participate in the performances.

The earliest textual reference to mask theatre in Korea seems to be from the 9th century AD and it mentions a form of temple ritual. Even today there exists a form of mask dance in which the village tutelary spirits appear as masked dancers.

It is assumed that the present forms of mask theatre started to evolve in the 18th century. They originally presented the spontaneous art of agrarian people. Later, the urban middle class also became interested in them. Thus commercial, touring mask companies became common too. In the 19th century mask theatre was at the height of its popularity.

The Confucian ruling elite never really approved of mask theatre because of its obvious social criticism and sexual allusions. The official attitude became even more negative during the Japanese occupation of 1910–1945. However, one of the forms, Pongsan, experienced a short revival in the 1930s.

The final revival began in the 1970s, when a new generation of academicians started to study the forms of Korean folk culture seriously; these forms were in serious danger of becoming extinct. Nowadays huge, state-organised mask theatre festivals gather together troupes from all over the country.

The Structure of the Plays

The regional genres of mask theatre include Pongsan, Yangju pyosandae nori, Tongnae malttugi, Hahoe, Tongyong ogwangdae nori, Namsadang, and Tukpoeki. All of them share a more or less similar kind of dramatic structure. It consists of short numbers, in which familiar characters are introduced.

These caricature characters include, among others, a wanton monk, a prostitute, a beautiful female shaman, a leper, a vain nobleman, a clever servant etc. The most complex dramatic structure is found in the Hahoe tradition.

Despite the slight differences, all the traditions share the most popular characters and stock scenes. Their aim has been to criticise and even ridicule the upper strata of society by revealing their greed and bigotry. Various kinds of amorous couples or triangles also provide material for the comic scenes, while animal characters are also popular. 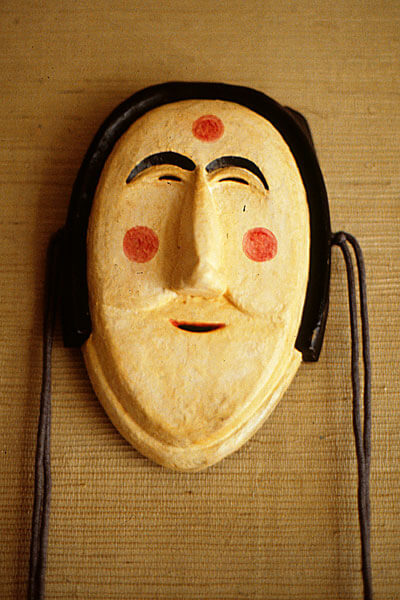 The masks are characterised by naivety and caricatures Jukka O. Miettinen 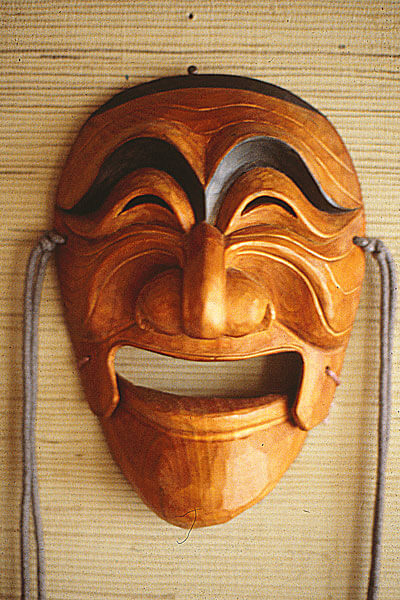 One of the Chinese-influenced wooden masks of the Hahoe mask theatre Jukka O. Miettinen

Most of the masks used today represent extremely stylised naivety that reflects the characteristically hilarious, Korean sense of humour. The wooden Hahoe masks probably form the oldest of all the Korean mask systems, as their stylisation is clearly Chinese-influenced.

The prototypes for many masks most probably came from China as well as via the Northern Silk Road from Central Asia, which once had a strong tradition of Buddhist mask dances and processional plays.

In most of the forms of the present mask theatre the masks are made of painted paper maché, sometimes also bark. In some of the traditions, masks are kept in temples, which is possibly due to the mask theatre’s ancient ritual roots, while in some other traditions they are burned after the performance.