Nibhatkin and the Ordination of the Monks

In older times a form of Buddhist processional theatre, called nibhatkin, was popular in Myanmar, but now it seems to have more or less disappeared and given way to more recent theatrical traditions. It was a kind of mystery play, in which tableaux depicting the life of the Buddha and his earlier incarnations were taken from village to village on ox-drawn carts or later on trucks. This custom is believed to have evolved at some time between the 14th and the 16th centuries from the hoza, the tradition reciting the Buddhist texts.

Tableaux were incorporated into the recitation, and ritual purification, fasting and prayers were required of the performers. Comic interludes came to be added to the nibhatkin, and in this way it is believed to have led to the creation of the later discussed zat pwe performances, which enact the didactic Jataka stories. The actual performing tradition of nibhatkin is unknown. 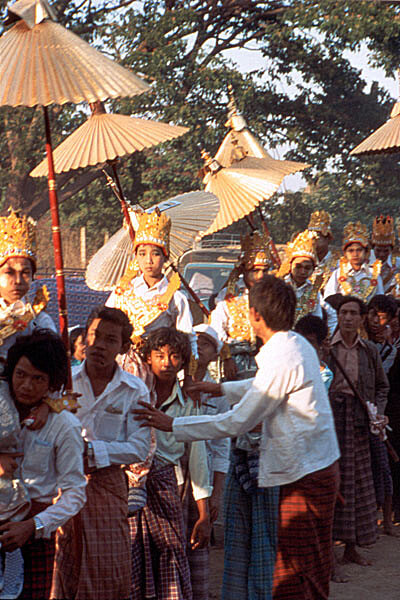 A still widely popular processional performance takes place in temple compounds when young boys and even grown-up men join the monastic order. Under golden umbrellas, which in Southeast Asia symbolise either earthly or spiritual power, the boys are carried on the shoulders of their male relatives to do the ritual walk around the holy stupa structure.

The boys are dressed as princes and thus they enact the role of Prince Siddhartha or the Buddha himself before he rejected earthly riches and pleasures, while the men carrying the boys represent Siddharta’s faithful horse. After this procession the boys end up in a temple hall, where their hair is shaven and they are finally accepted into the monastic order.