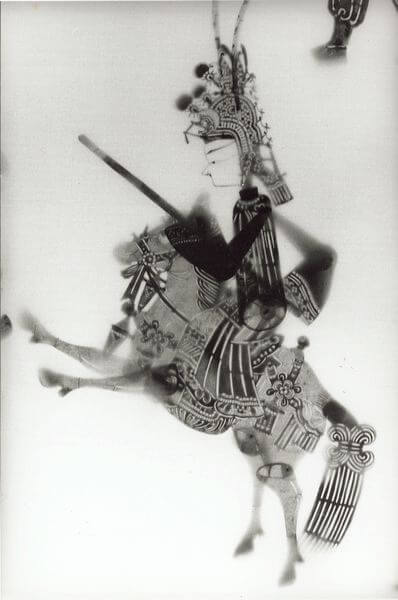 Several forms of shadow and puppet theatre have flourished in China during the centuries. The history of shadow theatre in China may indeed be very long. A legend from the 1st century BC tells about an emperor who has lost his beloved and how a shaman brings her back to the emperor in the form of a shadow. On the other hand, it may be possible that shadow theatre in China was born during the Tang Dynasty (618–907), when the Buddhist monks and missionaries visualised their didactic storytelling with shadow puppets. Textual evidence of the shadow theatre is available from the Song Dynasty (960–1279). During that time, it is known that the shadow puppeteers formed their own guild.

Many regional variants of shadow theatre evolved during the centuries. The style of Peking shadow theatre, for example, developed into two major styles. The western, now completely vanished, style employed large archaic puppets, while the eastern school absorbed elements from live opera, particularly from the southern Kun Opera. In their costuming and gestures the delicate shadow puppets of the eastern school imitate actual kunqu actors.

Chinese shadow puppets vary in size from some 20 cm to one meter. They are cut from leather that is treated and coloured so that they became transparent. Their legs, waists, shoulders and elbows can be bent, and their arms are constructed from two parts. Thus the puppets can imitate human movements when they are operated with rods behind a paper or muslin screen. Their reflections on the screen are colourful and their finer details are chiselled in the leather as a kind of filigree ornamentation.

The execution of the puppet’s faces (which are usually shown in profile) is normally most delicate. They follow the conventions of opera make-up. Thus the faces of beautiful ladies and handsome scholars are usually cut so that only a narrow outline of the face is left from the leather to reflect the shape of their faces on the screen. The faces of the painted-face characters and the clowns are done so that their reflections carefully imitate the colourful facial make-up of the opera actors. The heads of the puppets are usually movable so that the costuming of the characters can be changed according to the needs of the play.

The puppets also include many fantasy figures and animals. Just as on the opera stage, so also in the shadow theatre there are props, also cut of leather, such as chairs, tables, bushes, pens, mirrors, pipes etc. Special effects were created by pieces of coloured glass or mirrors. With a piece of red glass the spurting blood of a brave warrior can be projected while the cool moon with its rays can be projected onto the screen through a metal cylinder.

The puppets move according to the accompanying music just as the opera actors do. The puppeteer, who often also sings and delivers the dialogue, sits with his assistants behind the screen. The instruments of the orchestra vary according to the regional traditions. Shadow theatre has often been performed at temple fairs and on market places. It was also the entertainment of upper-class ladies, who often were not allowed to move around freely or even attend opera performances. The small size of the shadow theatre stage was suitable for setting up in private spaces, too. The plots of shadow plays are more or less similar to opera plots. They are often based on well-known epic stories telling about great warriors, famous wars, crime stories, romantic love etc. A director of a shadow theatre was usually acquainted with history, literature and theatre so that he was able to create plays for the use of his own group.

During the China mania or the so-called chinoiserie of the Rococo period Chinese shadow theatre also became known in Europe. In China, during the Cultural Revolution, shadow theatre was also used to illustrate revolutionary plays. In the late 20th century television and movies have reduced shadow theatre’s popularity, and real, traditional performances are now rare. Many groups have turned to modernised shadow figures inspired by popular children’s comics or animations.

There have been and still are in China several traditions of the three-dimensional puppet theatre. They can be divided, according to their manipulation techniques, into three major groups. 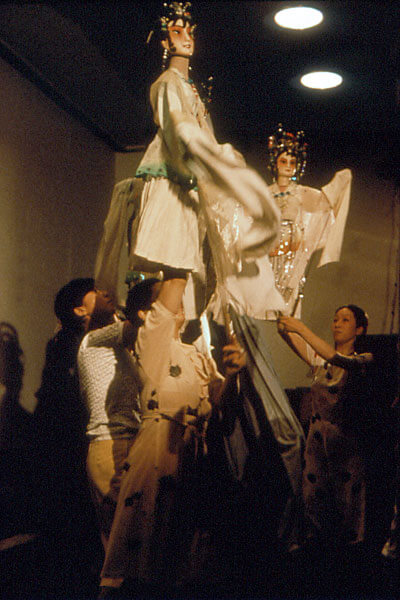 Similarly to the shadow puppets, the three-dimensional puppets also imitate live opera actors in their types, costumes and facial features, although their size and styles vary according to different regions. In Chinese history annals puppets are often mentioned which provided entertainment at religious festivals or funerary ceremonies. Among them are known to have been complicated mechanical puppets which were able to play musical instruments or swim in the water. Generally, the repertory of puppet theatre has been similar to that of traditional opera. The most complicated were marionettes which were sometimes operated by means of as many as 30 strings. The largest of the puppets are certain rod puppets the size of a human being, which are operated by several puppeteers.

Similarly to shadow theatre, puppet theatre was also originally performed in connection with different festivities. When these festivities were banned during the People’s Republic, the original context of this art form vanished. Since then puppet theatre has been heavily modernised, although original kinds of performances can still be seen outside the People’s Republic, for example in Taiwan and in Southeast Asia.