The Island of Bali

Though only a small island among the thousands of islands forming Indonesia, Bali is a chapter apart in the field of theatre. Despite the strong influence of increasing tourism since the 1930s, its theatrical tradition is one of the most interesting traditions in the world.

Bali has been the home of many unique theatrical genres for several centuries. For over half a century, many of the old court theatre traditions have been maintained by village communities. As a result, the classical tradition has been freely interpreted by Southeast Asian standards, which have mainly been dominated by the courts. While being preserved, traditions have also been developed, combined, and renewed. Many villages have their own specific traditions of music, theatre, and dance, and performances can be seen daily.

The History of Early Bali

Ancient megalithic ritual sites bear witness to the long history of this island, although they have been covered over by later terraced rice fields and villages. Archaeological finds include bronze artefacts from before the present era. A large bronze drum or kettle gong called “The Moon of Pejeng”, stored in a temple in the small village of Pejeng, indicates contacts with the Dong-son bronze culture, which spread from Southern China to South-East Asia in the first millennium BC. 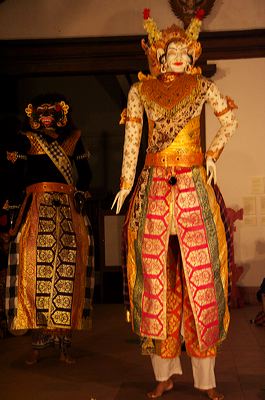 The Jero Luh giant is one of the sacred masks in Bali. It represents a legendary Chinese ancestor Jukka O. Miettinen

In the early centuries AD Bali gradually came under the strong influence of the Indianised Hindu-Buddhist culture. Bali was also influenced from time to time by Chinese culture, as can be seen in architecture and the visual arts, and in theatre, where certain mask types and plots indicate Chinese influences.

The nearby island of Java played a decisive role in the development of Balinese culture. Java often overran its tiny neighbour, and Ball did not have its own king until the tenth century. In the late tenth century a Balinese prince married a princess from East Java, which led to a brief union of the kingdoms of Bali and East Java. Around the middle of the fourteenth century the powerful Majapahit dynasty (13th–15th centuries), the last Hindu dynasty of Java, conquered Bali, which was to become the place where the old Javanese culture made its greatest impact outside Java itself.

The island of Bali, however, was never wholly Javanised; it continued to develop its own type of Hindu culture, which, unlike that in Java, managed to retain its integrity against the spread of Islam, which came to dominate Javanese culture in the fourteenth century.

When the East Javanese Majapahit dynasty was conquered by later Islamic dynasties in the early 1500s, members of the Hindu nobility, artists, and priests fled to Bali, bringing with them a new wave of Javanese culture. The culture of the small Balinese kingdoms preserved many features inherited from East Java, whose influence is especially obvious in the oldest preserved forms of Balinese court theatre.

Early contacts with Islamic Java were few, and Balinese culture was able to develop its intrinsic features undisturbed by outside influences. The West became interested in Ball in the sixteenth century, but the first European trading station was not established until the middle of the nineteenth century.

The Dutch soon exerted their influence on the island, but Bali never became a centre of colonial rule in the same way as the island of Java. Balinese culture preserved its original features throughout the nineteenth century, a critical period for many Asian countries under Western colonial rule.

In 1906 the Dutch, nevertheless, took Bali by force, and most of the members of the eight royal families took their lives in an act of ritual suicide (puputan). Only a few of the children of these families survived, though they lost most of their political power and wealth. As a result, the artistic traditions of the courts came to be preserved by the artists now employed by the village communities.

The villages of Bali had traditionally maintained a relatively broad degree of self-government with village councils (banjar) presiding over common affairs. The musical instruments, masks, and theatrical costumes of the courts, as well as their traditions of theatre and dance, became the cultural heritage of the villages and their councils.

The Western myth of Bali was created in the 1920s and 1930s, and its fame as “the last South Sea paradise” quickly spread to the West, partly as the result of a regular shipping route opened by the Dutch. Bali soon became a Mecca for artists and travellers thirsting for the exotic.

Western artists and intellectuals found their way to Bali, and local artists inspired by Western aesthetics began to develop modern Balinese art. Western travellers and influences soon had an effect on the development of theatre and dance. Luxury hotels began to stage performances, which were the predecessors of today’s tourist shows, and Balinese dance and theatre became known in the West when a Balinese gamelan orchestra and dance troupe toured Europe, performing to enthusiastic audiences.

World War II disrupted the peace of this island paradise, and the Japanese Occupation was a trying time for the Balinese. Indonesia declared its independence on 17 August 1945, and soon afterwards local officials were entrusted with the civilian administration of the island. This ensured the preservation of the island’s own culture and religion in predominantly Islamic Indonesia. Further trouble, however, lay ahead. In 1946 the Dutch returned to Bali, which led to a bloody civil war and the heroic puputan ritual suicide of Balinese freedom fighters.

The 1960s was a tragic time in Bali. The island’s main volcano, the sacred Gunung Agung, erupted and caused great damage, while famine and bloody political upheavals killed thousands of Balinese.

The beginning of mass tourism was heralded by the opening of an international airport in the late 1960s. The tourist industry has grown steadily, and despite the bombings by militant Islamists in 2002 and 2005, the present yearly number of visitors is about two million. This has had both positive and negative effects on Balinese theatre and dance. While tourism provides welcome revenue, it can also erode the standards of performances when the local repertoire is adapted to foreign tastes.

Forms of Performing Arts, The Grades of Sacredness

Of all the forms of dance and theatre now performed in Ball, the oldest ritual performances predate the arrival of Hindu-Buddhist culture. The Balinese divide their performances into various classes according to their degree of sacredness. The most sacred ones are the wali performances, excluded from non-Balinese and outcasts, and are usually held in the most sacred precincts of the temples, which consist of several adjacent courtyards.

The bebali performances are staged in the outermost temple courtyards, and they are often of an artistic character and also open to foreigners. Other types include magical, though not temple-related, performances, secular performances, and tourist shows. 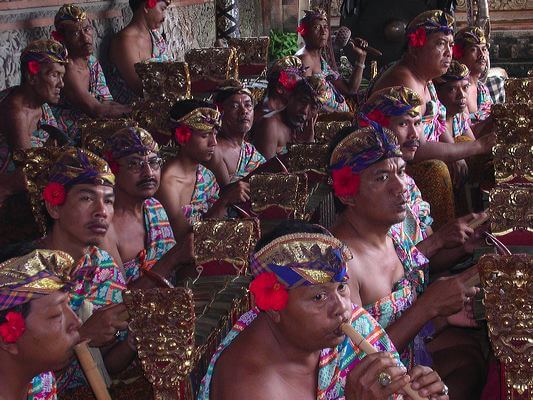 There are several variations of a Balinese gamelan orchestra but all of them are dominated by percussion, such as metallophones and gongs Ari Huhtala

Most of the styles of theatre and dance are performed to the accompaniment of Balinese gamelan music. There are many types of gamelan music and ensembles in Indonesia, but the gamelan gong kebyar, the most popular form of Balinese gamelan, is generally faster in tempo and sometimes more feverish and more capriciously accented than the classical gamelan of Java. 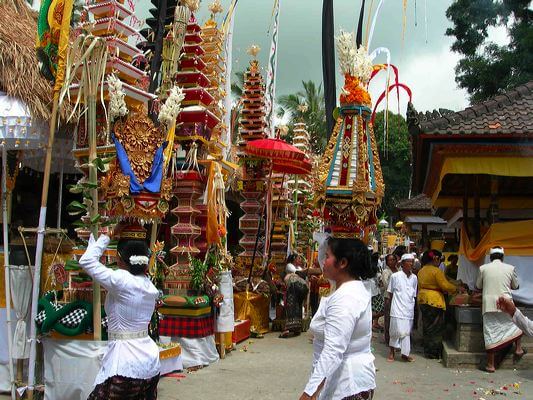 Most of the forms of theatre rely on classical Balinese dance techniques, which partly reiterate old Javanese prototypes, which have developed further into a rich, expressive, and dynamic style specific to Bali. Although Balinese theatre is open to new influences, its sacral core appears to have remained unchanged over the centuries.

Religion and the Performances 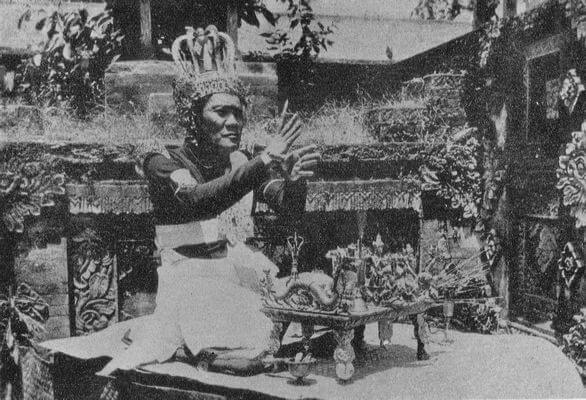 Bali is the home to its own type of religion, Bali-Hinduism. It combines elements of animism, ancestor worship and Hinduism, which was received from India almost two millennia ago. After that Hinduism developed in Bali through several steps into its present syncretistic form. 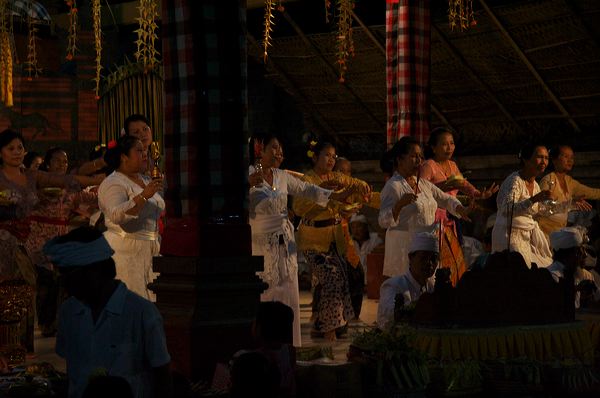 Religion is very much a part of everyday life in Bali. Morning starts with offerings given to various parts of the house, trees, rivers etc. A complicated system of several simultaneous calendars gives an almost daily reason for minor or major temple festivals somewhere on the island.

Temple festivals include myriads of different rituals and ceremonies as well as voluptuous offerings, which in themselves are art works of the highest order. Temple festivals, as well birthdays, weddings or grand cremations provide the natural context for many theatrical performances.

As in India, also in Bali, theatre and dance, on the deepest level, are seen as acts of sacrifice. In Bali, as in many Southeast-Asian countries, there are no specific words for an “actor” or a “dancer”. A general term, tukang, means “the one who beautifies”. 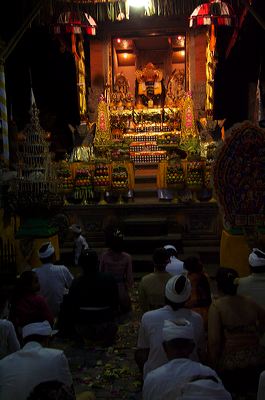 The mask of Barong is worshipped at a temple of the ancestors during a temple festival Jukka O. Miettinen

A charismatic performer is said to possess taksu, a special energy or a kind of spiritual power. Some masks or even theatrical headdresses are also believed have taksu. Many masks such as the mask of the village protector, Barong, as well as some exceptionally old masks are venerated in temples. 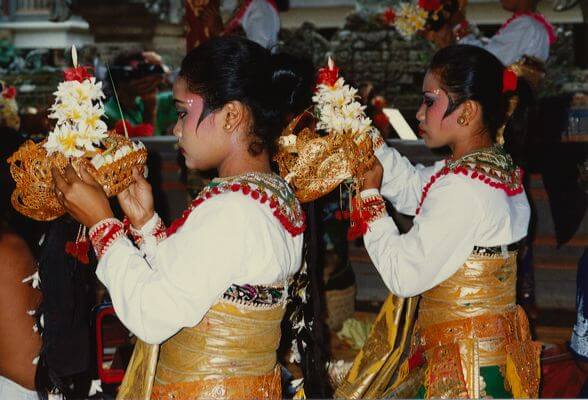 Offerings are given to headdresses before a gambuh performance Kimmo Kahra

A good performer should be able fulfil the tripartite idea, which covers, first, bayu or energy, secondly, sabda or inner voice, and third, idep or thought.