Bali is the home of many ritual performances that do not exactly correspond to the traditional Western conceptions of “theatre” or “dance”. They are mostly religious rituals, full of magical meaning to their performers and spectators.

They may include dances and elements typical of theatrical performances, but are rarely intended for aesthetic or intellectual pleasure in the present-day Western sense of the term. In these rituals, dance and theatre are always made to serve religious and magical purposes. They are usually performed in the inner temple courtyards in connection with calendar feasts.

The performers are mostly non-professional, although some forms of wali may employ professional dancer-actors. In general, dancing skill is of secondary importance. Ritual performances fall into roughly two groups: ceremonial dances, generally ancient sacred dances of indigenous origin, and trance rituals in which the performers and sometimes the audience as well fall into a trance.

Baris, from a Sacred War Dance to a Dance of a Warrior 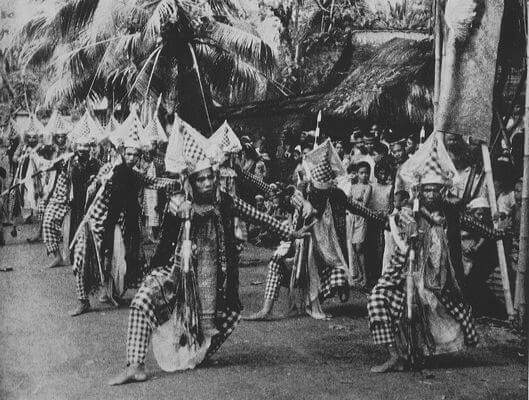 One of the main groups of wali dances is the dignified and ceremonial baris gede, performed by men. It is an ancient war dance, performed by a group arrayed in line, usually with six to sixty dancers. The main emphasis is on co-ordinated group action, sometimes creating the impression of a stylised battle with movements limited to simple steps and leg movements. Baris dances are known to have been performed as early as the 16th century.

The dancers, who can be regarded as the bodyguard of deities visiting the temple, wear pyramidical headdresses decorated with triangular pieces of mother-of-pearl, and in their hands they hold sacred weapons that are heirlooms. The various genres of baris are classified according to the types of weapons used. There is also a modern, completely secular variant of the dance. 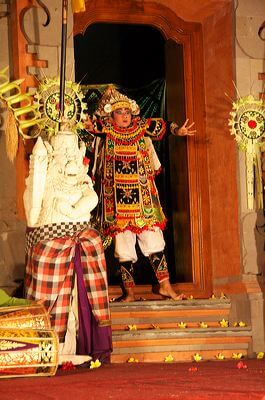 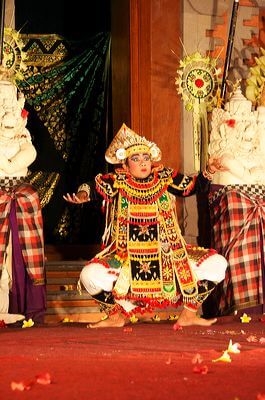 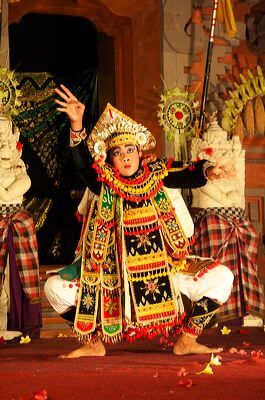 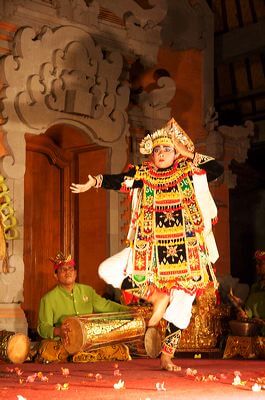 The secular baris is a virtuoso solo in which the dancer portrays the emotions of a warrior departing for the battlefield. The technique is a combination of the sacred baris and various elements of Balinese classical male dance. Fast, jerking movements, tensed arm gestures, and expressive eye movements are used to convey the warrior’s rapidly changing moods, ranging from courage to fear and from doubt to determination. This form of the baris is usually included in dance performances staged for tourists.

Another significant form of the sacred wali dance is the rejang, a group dance, performed by women. Its choreography is based on simple line formations, and it is performed in daytime usually by a group of forty to sixty non-professional dancers. The rejang is a relatively simple dance, although its slow movements evoke a dignified feeling of beauty. 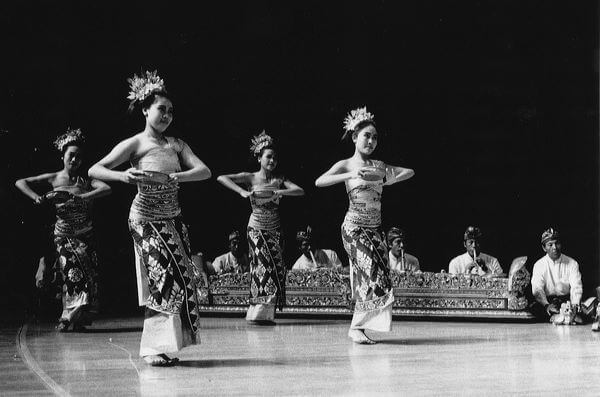 The gabor is another female group dance, a graceful offering-ritual usually performed by professionals, and it is thus natural that its movements do not greatly differ from classical dance. A secular variant of the gabor has become established as a general welcoming dance which is usually performed as an opening number in tourist shows or in receiving honoured guests.

Ball is famous for its many traditions of trance rituals, where one or several dancers fall into a trance by means of incense, music, chants, prayers, and sometimes drugs. The trance is an altered state of consciousness, and sometimes the audience can also come into contact with the spirit world and be possessed by gods, animistic spirits, or even animal spirits. Trance rituals are not limited to Bali alone.

Almost everywhere in Asia, trance, in one form or another, is an integral part of indigenous ritual theatre. In view of its small size, there are exceptionally many kinds of trance rituals in Bali.

Sanghyang (sang: Lord; hyang: God) is a genre of trance dances generally performed in remote villages, although occasional tourist performances can also be seen. It comprises several forms, and local variants abound in many villages. In most types of sanghyang the men become possessed by animal spirits. In sanghyang jaran the men are transformed into horses, in sanghyang lelipi they are changed into snakes, and in sanghyang celeng they are possessed by the spirits of pigs.

The performances have the purpose of ritual purification; for example, men in the pig trance “eat dirt”, at least symbolically, and thus aid in the purification of their community. Trance rituals often become hectic events, where the village priests and their attendants control unpredictable action to avoid injuries. After the performance the priests sprinkle the participants with holy water, thus helping them regain normal consciousness.

The most famous and, without doubt, the most beautiful form of sanghyang is the sanghyang dedari (dedari: fairy), performed by pre-adolescent girls. The performers are usually temple servants of some kind, sometimes relatives of the priests, but without actual dance training. The girls are induced into a trance, after which they begin to perform an intricate dance partly based on various ancient animal movements.

They are then lifted onto the shoulders of men, who move rapidly, while the girls continue their dance without any support. Finally, the girls dance on glowing coals, and are later brought back to normal consciousness. The young performers are believed to be possessed by celestial nymphs. The almost feverish vocabulary of movement of the sanghyang dedari has influenced other dance forms such as the classical legong. 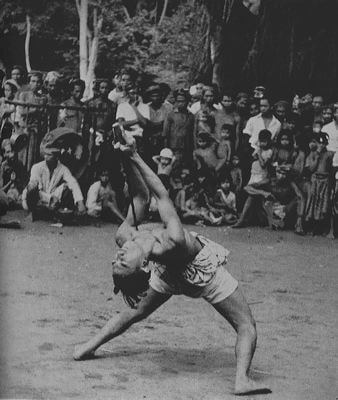 There are also other Balinese trance rituals, some of which have been combined with less sacred forms of dance-drama. Among the most famous of these is the self-stabbing kris dance related to the Barong-Rangda performances. Trance rituals have also evolved into purely commercial performances. One of the best known of these variants is the kecak or cak, which was created in the twentieth century and will be discussed later.