Unlike other countries in Southeast Asia, Vietnam developed a form of spoken theatre, the kich, which was inspired by French models. A Western-influenced type of marionette theatre was also introduced in South Vietnam during French rule. A new form of musical theatre was also created. It is cai luong, which combines elements of Chinese and Western theatre with Vietnamese music and stories.

Court opera had a great effect on the creation of cai luong, Vietnam’s main form of popular theatre. In 1918 cai luong evolved from a type of musical interlude into a specific form of drama. The strict stylistic conventions of hat boi were relaxed, and the musical accompaniment of cai luong consists mainly of beautiful South Vietnamese melodies.

The hat boi court opera was usually performed in front of a single backdrop with only a table and a couple of chairs as props, as in Chinese classical opera. Cai luong, on the other hand, attempts to create an illusionistic stage setting with changing backdrops, as in Western theatre, while the basic costumes follow the customs of South Chinese opera.

Along with the semi-historical fantasy costumes, modern dress can be used according to the theme of the performance. Melodramatic elements and sensational stage effects are typical of these kinds of popular theatre forms around Southeast Asia.

End of the Twentieth Century

Efforts to resist the French eventually led to their expulsion from the country in the mid-20th century, leaving a nation divided politically into two countries. Fighting between the two sides continued during the Vietnam War, ending with the North Vietnamese victory in 1975. Emerging from this prolonged military engagement, the war-ravaged nation was politically isolated. The government’s centrally planned economic decisions hindered post-war reconstruction and its treatment of the losing side engendered more resentment than reconciliation. 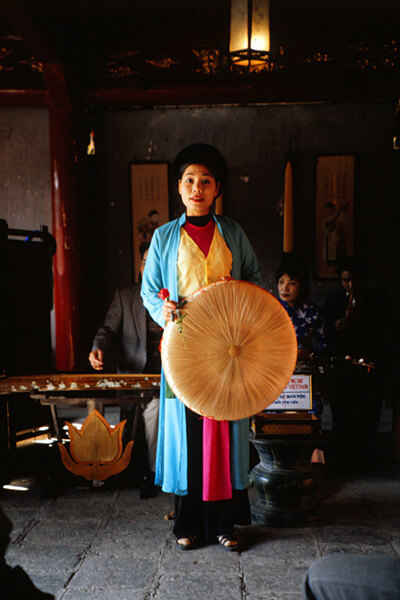 In 1986, Vietnam instituted economic and political reforms and began a path towards international re-integration. By 2000, Vietnam had established diplomatic relations with most nations. Its economic growth had been among the highest in the world in the past decade. Vietnam is at present one of the most popular tourist destinations in the whole of Southeast Asia.

Water puppet theatre is the most popular entertainment offered to tourists, and it can now also be seen outside North Vietnam, its original home. TV and films are the main rivals of other traditional theatrical arts. However, traditional operatic forms are regularly broadcast on TV.