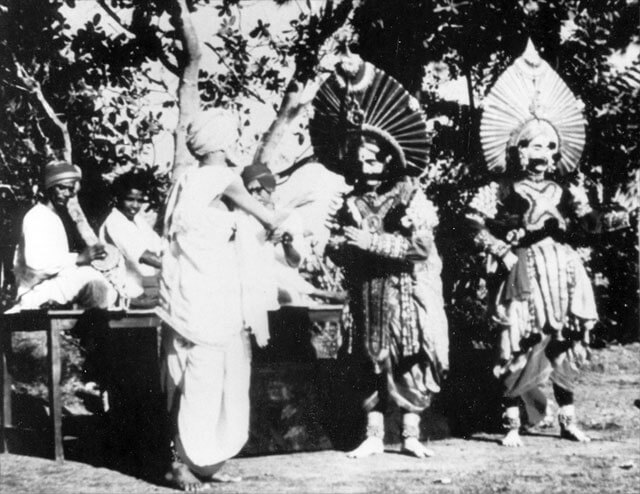 Preparations for an outdoor yakshagana performance Embassy of India

Yakshagana (music of the heavenly yakshas) is a colourful form of popular theatre, which combines singing, dancing, energetic dance, and acrobatics. There are three variations of it, and all of them are performed in the southern state of Karnataka. Yakshagana is dominated by battle scenes and thus its dominating rasa or sentiment is the heroic. Although yakshagana is often regarded as a form of “folk” theatre, it is, however, a complex form of art with its classical melodies and references to Sanskrit literature.

The History and the Texts

The earliest extant yakshagana play, in the form of a palm-leaf manuscript, dates back to 1564. More written evidence from the following centuries throws light on its history. In the early 20th century yakshagana was taught in the village schools in Karnataka. It served as a tool to memorise the mythological stories on which the plays are based.

Yakshagana mostly deals with heroic sequences from the Puranas and the great epics, the Mahabharata and the Ramayana. The language is mainly local folk language, although quotations in Sanskrit are frequent.

Yakshagana evolved into three subtypes. Here the focus is on the grandiose outdoor form performed during the dry season. A kind of “chamber form” of yakshagana evolved in coastal Karnataka. It is performed indoors and no make-up and costumes are used. In some of the northern parts of the state there is a yakshagana-influenced theatre form, doddata (big play). Its themes may be derived from mythology, but it also deals with love stories and satirical themes.

The Troupe and the Music

A troupe or mela of the outdoor type of yakshagana may have as many as twenty members and it is usually named after a village or a temple. The troupe consists of actors, dancers, singers, musicians, and stage assistants. The chorus and the whole performance are led by a troupe leader, a feature already common in the classical Sanskrit plays. In yakshagana he is called bhagavata.

The rich music employs classical ragas and folk melodies. Some of the ragas, however, are found only in the yakshagana repertoire. The troupe leader has an active role in the performance. He acts as the narrator, sings, and leads the orchestra with cymbals. The orchestra only consists of drums and pipes.

Outdoor yakshagana is performed during the cold season, from November to May. The performances usually start at around 9 pm and end when the sun rises. The performance space is a square at ground level, while the audience sits on its three sides. Two large oil lamps illuminate this temporary stage.

Yakshagana is performed by an all-male cast, while boys play the female roles. But actors may appear in several roles. The leader of the whole performance, bhagavata, has a crucial role, as he takes care of the narration, much of the singing and leads the orchestra. Another important figure is the buffoon, who, like his counterpart in the Sanskrit plays, moves freely among the mythological characters of the play. 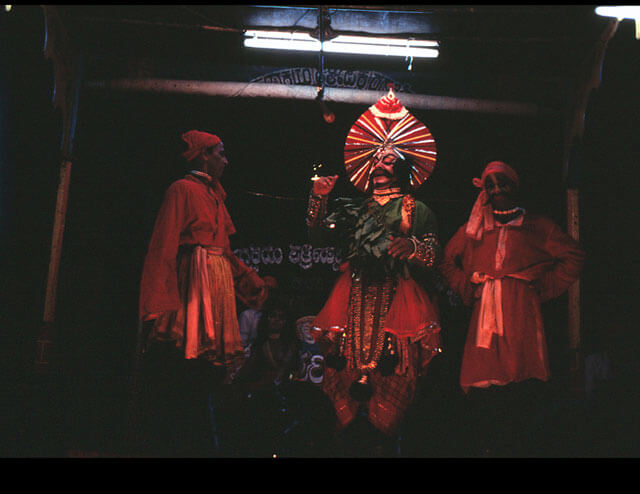 A portable curtain is used, as in many of the forms of South Indian theatre, but otherwise the stage is empty. As the plays deal mostly with heroic battles, the acting technique is characterised by energetic dances and powerful jumps and kicks, which give yakshagana its acrobatic character. The acting technique refers to the classical abhinaya mime technique, although only sketchily.

The evening starts with the necessary preliminaries in the dressing area and on the stage during which God Ganesha is venerated. The next rituals are dedicated to Krishna, after which follows the opening dance.

The actual play usually starts with an audience scene at the king’s court. It introduces many of the central characters in a grand style. When the sun rises, the leader of the troupe sings his concluding song. After that the actors return to the dressing area carrying the two oil lamps with them.

The costuming has a central role in giving yakshagana its overwhelming baroque character. The exaggerated, huge turban-like headgear (mundasu) of the central characters dominates the costuming. The mightier the character, the bigger his black turban glittering with golden ribbons.

The actors in the male roles wear thick dhotis wrapped as trousers, while the upper body is covered with red, green or black jackets. The heavy chest ornaments, ear decorations, necklaces and epaulets are made of gilded wood.

The make-up of important male characters includes a conch-shell design of the sides of the cheeks, and a U-shaped mark on the forehead. Many of the main characters wear black moustaches made of threads of cotton.