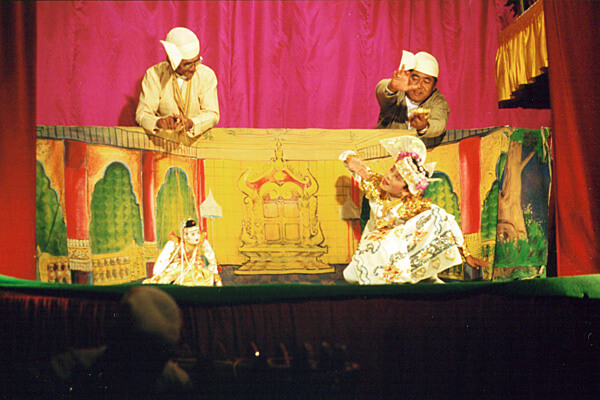 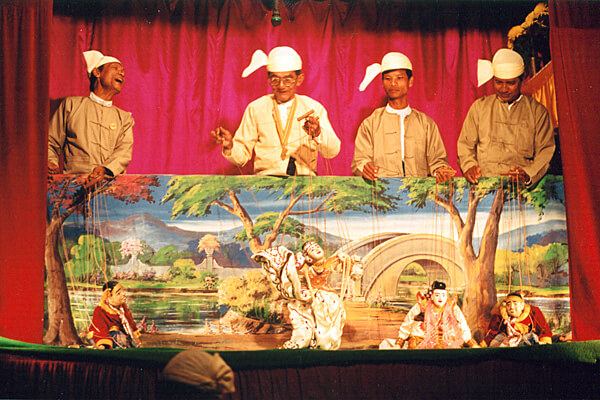 Burmese literary sources mention that marionette theatre was known in the country as early as the 15th century. However, it is generally believed that Burma’s highly valued marionette theatre tradition (yokhte pwe) was formulated at the beginning of the so-called golden age of Burmese theatre in the late 19th century. Its original purpose was to propagate and popularise the Buddhist Jataka stories, and during King Bodawpaya’s reign (1782–1819) the Minister of Theatre, U Thaw, succeeded in assembling several companies of puppeteers.

The origin of the idea is not known, but it is possible that the Thai court, at the time prisoners of the Burmese, also had puppets, which inspired the latter to create their own form of puppet theatre. Another possibility is that the Burmese were familiar with the marionette theatre of Sri Lanka, with which the Burmese had close religious and cultural contacts. It has been suggested that the reason for the popularity of marionette plays was the ban forbidding live actors from portraying the sacred personages of the Jataka stories.

The court supported several companies of puppeteers and the puppet-masters were highly respected, often more than ordinary actors. The plays were originally created for the court but the touring troupes of the rural areas developed their own versions of the plays, leading to an amalgamation of court and popular forms. 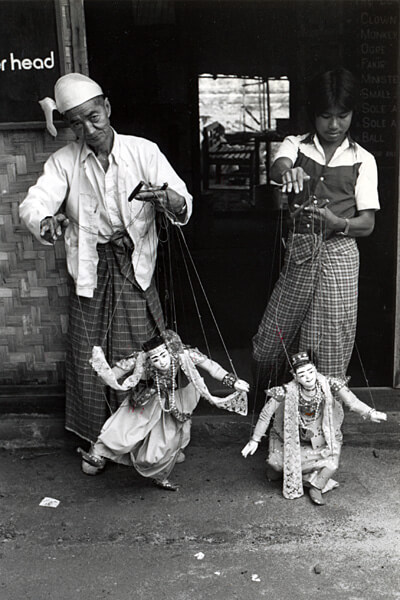 The marionettes, manipulated from above with strings, are about 50 centimetres high. The head, hands, and feet can all be moved, and in older times, in the most complex marionettes, even the fingers could be bent, the eyes closed, and the mouth opened. The most technically advanced puppet was usually the nat priestess. It is known that in the mid-nineteenth century such a marionette could require tens of strings to manipulate its complicated movements. Even today two puppeteers are needed to manipulate one puppet during its most demanding movement sequences. Marionettes of jugglers perform with balls threaded into strings and dancing-girl marionettes can move their breasts and even buttocks. 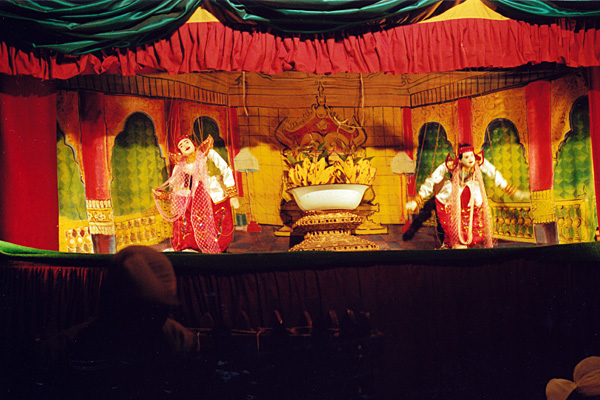 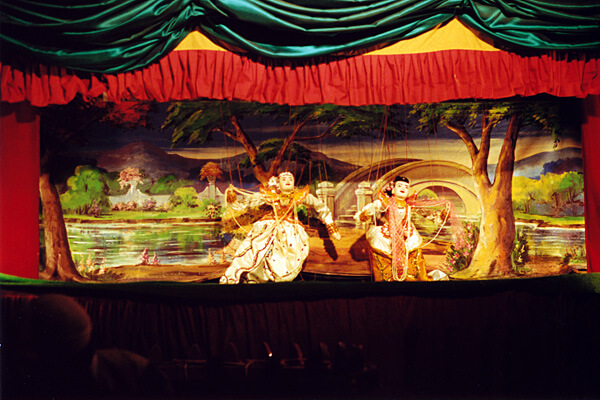 Dance of the Prince and Princess Jukka O. Miettinen

In older times, the performances lasted all night, and a single Jataka play could extend over several days. Before the actual performance, offerings were made to the Buddha and the nat spirits. In older times, the plays followed a definite pattern, the first part presenting the creation of the universe, according to the Burmese-Buddhist world-view, where the old universe goes up in flames and the following one is deluged. This is followed by a third inhabited by the nat. A marionette of a nat priestess then performs a skilful dance dedicated to the nat. Various mythical animals and beasts appear in their prescribed order, followed by demonic figures enacting their feasts.

Video clip: Dance of the Prince and Princess Veli Rosenberg

A marionette of a Magician or a Sorcerer, one of the stock characters of Burmese theatre, performs conjuring tricks with a wand in his hand. The Prince (mintha) and Princess (minthamee), the standard hero and heroine of Burmese theatre, then appear to perform their delicate dance. This is followed by the king and the ministers, whose discussion serves as an introduction to the actual play. The plots of the plays are derived either from the Jataka stories or from the Ramayana epic. 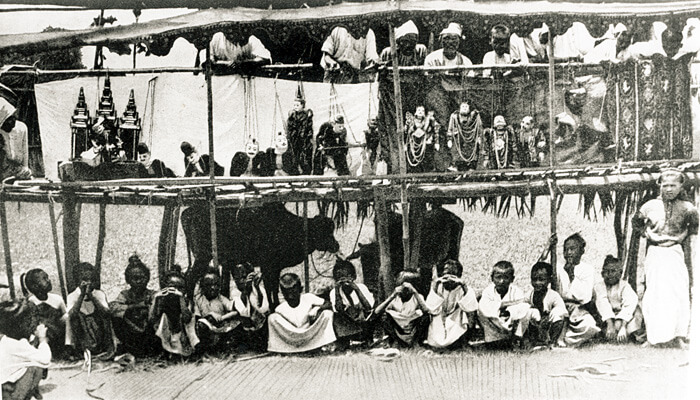 Marionette stage of the older times with a palace scene on the left and a forest scene on the right. Länder och Folk I Ord och Bild, Helsingfors: Holger Schildts Förlag, 1928

Traditionally, marionette plays were performed to the accompaniment of an orchestra on a wide stage containing a fixed set of a throne hall, with an elaborate throne and ritual parasols on the left and a forest scene on the right. The wings of the easily constructed bamboo stage were covered by a pair of curtains painted with scenes from the Jataka stories. The puppeteers worked behind the curtain, manipulating the puppets from above the stage.

The colonial period destroyed much of the traditional theatre, and consequently marionette theatre became rare. With luck one may still see marionette theatre performed at temple festivals. Since the 1980s marionette puppet theatre has been somewhat revived to serve the tourist industry. Since the colonial period the wide stage with its palace and forest sets has been replaced with a mini-size Western-type stage with a curtain and painted backdrops, showing a palace, a forest, a village etc. Full plays are now very rare. Shows for tourists usually consist of dance numbers of the popular characters, such as the Sorcerer, the Prince and the Princess and some comic characters.