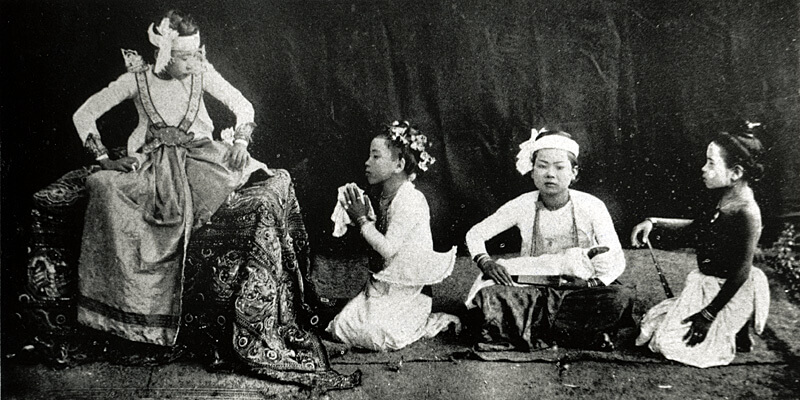 Zat pwe is the classical form of dance-drama in Myanmar. It often includes sung passages as well. The Buddhist Jataka stories or their adaptations form the most popular literary material for these dramas, hence the name “zat”, which indicates a Jataka. Stories are, however, also derived from Burmese history. Traditionally, these kinds of plays, accompanied by a saing orchestra, dominated by percussion instruments, lasted the whole night. 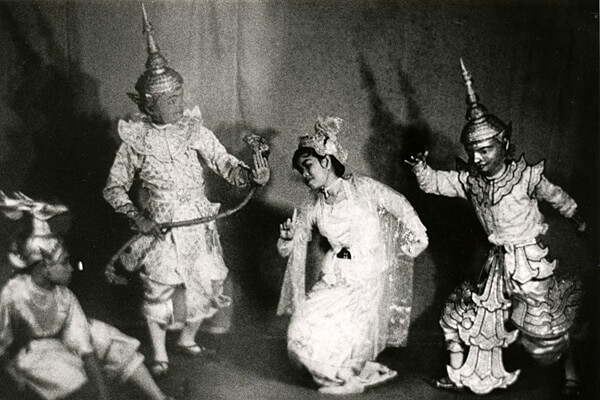 A scene from a Ramayana play Reproduced from a photograph in the Rangoon National Museum by Jukka O. Miettinen

The golden age of Burmese theatre in the late 18th and early 19th centuries produced not only marionette theatre but other forms of drama as well. Court actors from the conquered Thai capital of Ayutthaya and their refined art inspired the Burmese to further innovations. The poet Myawadi Mingyi U Sa (1766–1853) dramatised the Ramakien, the Thai version of the Indian epic Ramayana, for the Burmese stage. This led to the Burmese “Ramayana play”, a danced pantomime broadly following the conventions of the khon mask theatre of Thailand.

In the Ramayana play the Thai tradition is adhered to in the plots, in some of the dance movements, and in the characters with their costumes and decorative papier maché masks, which, however, seem slightly more robust in character compared with the Thai masks, whereas the music and dance techniques are quintessentially Burmese. The Ramayana became established in the Burmese literary and visual heritage. The spectacular Ramayana play has, however, become rare in present-day Myanmar. In addition to the Ramayana, the Thais provided another significant series of stories, the originally Javanese Prince Panji cycle, which is known as Inao in Thailand and Burma.

The Burmese drama which evolved around the late 18th century and early 19th century had been preceded by the nat pwe rituals, the comic interludes of the Buddhist nibhatkin tableaux, and the zat pwe Jataka plays. The first secular play, Maniket Pyazat, was written by the court poet Padhetharaza (1684–1752), but it was only under King Bodawpaya (1782–1819) that Burmese drama began to develop at a faster pace.

The king had a special Ministry of Theatre in charge of theatrical arts, and the court plays became a kind of state ritual. Burma’s main dramatists were U Kyin U (1819–53) and U Pon Nya (1807–66). Many of their dramas took their themes from Jataka stories, whose didactic nature and fairy-tale character now gave way to a slightly more realistic world and, particularly in the works of U Pon Nya, to a more psychological portrayal of character. A major reform was the shortening of the dramas from events lasting several nights to performances of only a single evening.

Three plays by U Kyin U, Maho, Dewagombam, and Papahein, all presenting a kind of Burmese “classical-romantic” style, have been preserved. Their language is especially valued for its poetic and emotional qualities. As mentioned, U Pon Nya developed drama in a more realistic direction. Although the Hindu-Buddhist karma still controls the events, and Buddhist moral precepts still dictate the basic conflict of the plot, U Pon Nya depicts a world that appears to be real, and his characters are psychologically credible. There are still the Prince and Princess, stock characters of Burmese theatre, but in U Pon Nya’s dramas they are accompanied by a range of “ordinary” people, sometimes comic, lesser characters, such as peasants and pedlars. Despite the conventions derived from the Jataka stories, his dramas mirror his times in a colourful and even detailed manner. 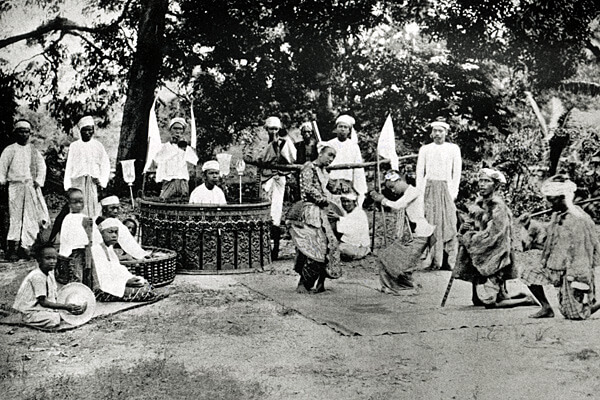 U Pon Nya’s major plays are Paduma (synopsis), Wizaya, Kothala, The Water Seller (synopsis), and Wethandaya, the last-mentioned being based on the Vessantra Jataka, describing Buddha’s penultimate incarnation. These plays have a distinct formula. As in the marionette plays, the first major scene, presenting the conflict, usually takes place in the throne hall of the palace, where the king is shown in conference with his ministers. The Prince and Princess, the hero and heroine, must often wander in the forest and meet various dangers. The villain of the play, an unethical person, must finally answer for his or her deeds, but the virtuous ruler is lenient, and in many of the plays the villain retires to the woods as an ascetic, leaving the worldly temptations behind him.

The plays are usually performed with dance movements or at least with dance-like gestures employing the classical dance technique described above. A classical percussion-dominated orchestra accompanies the plays. However, as in other Southeast cultures, Burmese plays were rarely orchestrated throughout. The musical structure is based on well-known stock melodies, which the audience associates with basic dramatic situations, for example, triumphal marches, battles, lover’s reunions etc. The actor-dancers speak their lines and also sing in the emotionally laden climaxes. The scripts also permit improvisation, particularly in the comic scenes.

U Pon Nya worked in close contact with the court. He was a personal friend of the king and he wrote six plays especially for the court, where the original manuscripts were kept. Before long, officials in the provinces began to imitate the court, commissioning plays popular in the capital. In this way, the court plays became popular among the ordinary people. Touring troupes created their own versions of the plays, which could be staged in the yards of private mansions or in village squares. The troupes performed to the accompaniment of small orchestras. There were no props; a branch could symbolize a forest and a clothes chest could serve as a throne while the costumes imitated court costumes as far as possible.

Although full-length productions of U Kyin U’s and U Pon Nya’s plays are rare today, they are regarded as classics of Burmese drama.