The heyday of Khmer culture came to an end in 1431, when the Thais conquered Angkor and the Khmer court for the second time, and also, possibly, its artists were captured and taken to the Thai capital of Ayutthaya. The conquerors greatly valued the dance and theatre traditions as well as other aspects of the Khmer culture. Over the centuries Khmer traditions were adapted to the Thai taste and Thai spirit. The result was what is known today as the classical Central Thai culture with its various forms of theatre and dance.

Meanwhile, the powerless Khmer court was reduced to poverty, and during the ensuing centuries of insecurity it was constantly forced to change the site of its capital. In the mid-15th century a new capital was founded on the banks of the Mekong River, in Phnom Penh, but in the 16th century the capital was moved to Lovek and after that to Udong. Phnom Penh was again chosen as the capital in 1866.

After Cambodia became one of the French protectorates (together with Vietnam and Laos) in 1863, the French colonial officers ordered the plans of the Thai Grand Palace from Bangkok. Thus, the present Grand Palace of Phnom Penh was built according to a Thai model. Thai influence had already been strongly felt in Cambodia since the sack of Angkor by the Thais in 1431. Theravada Buddhism, as well as several artistic expressions, was adopted from the Thais, as can be seen in the post-Angkorean architecture, sculpture and painting.

The transplanting of the Thai tradition was, in many ways, a total process, and in the nineteenth century, for example, two complete dance troupes were sent from the Thai court to the Khmer court. Until World War II the Royal Cambodian Ballet performed its classical repertoire in the Thai language.

The Cambodian classical repertoire of today bears strong Thai influences. The grand scale dance-drama, lakhon khol, is basically a Khmer version of the Thai khon, a ‘masked pantomime’ depicting scenes from the Ramayana. Nang shek thom, or “large hides”, is one of the two types of Cambodian shadow theatre. Despite some differences in the style of the puppets, it is closely related to the ancient nang yai shadow theatre of Thailand. Similarly, the forms of Cambodian dance-dramas called roeung or lakhon were, in turn, strongly influenced by the lakhon dance-drama of Thailand. 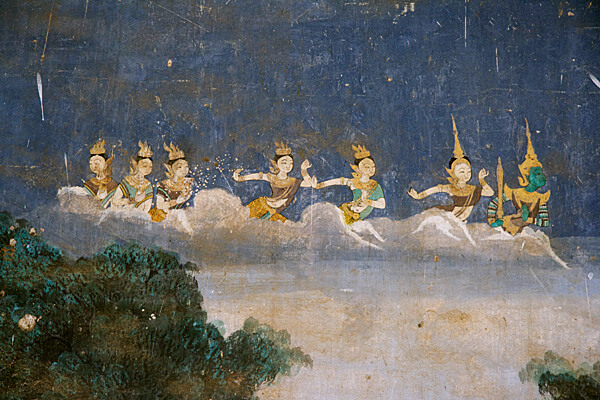 Heavenly dancers in a mural at the temple complex of the Grand Palace in Phnom Penh, early 20th century Jukka O. Miettinen

A well-known saying is that if one is seeking the remnants of ancient Khmer culture, one should look at Thailand but while seeking traces of the Thai culture of the Ayutthaya period, one should look at Cambodia. Although this is an exaggeration, there is a certain truth in the saying.

The kingdom of Ayutthaya adopted several cultural elements from the Khmers, including court rituals, the concept of the god-king and possibly also the traditions of court dance and dance-drama. Cambodia, on the other hand, was annexed to Thailand and the culture of Ayutthaya formed the basis of Cambodian Buddhist art as well as court art.