Bharatanatyam is the famous form of lasya dance practised for centuries in India’s southernmost state, Tamil Nadu. It is often claimed that it is the oldest form of dance still being performed in India. This is emphasised by its present name, given to it in the 1930s, which means “Bharata’s dance”, which refers to the name of the legendary author of the 2nd century AD Drama Manual, the Natyashastra. 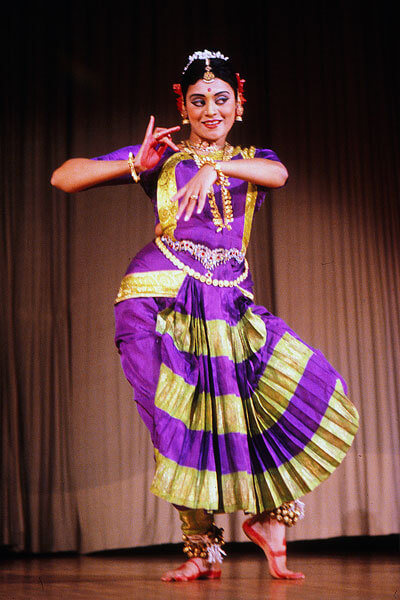 Bharatanatyam is now best known as a solo form, most often performed by women. However, male dancers also perform it every now and then. It is also known that group dances and even dance-dramas in this style were common earlier. Bharatanatyam’s classical repertoire was enriched by new compositions in the 20th century, and during recent decades its technique has also served as the basis for contemporary choreographies.

Bharatanatyam, as well as the other lasya style solo dances, has its roots in a certain type of dance that had already been described in the Natyashastra in the 2nd century AD. It seems that this kind of solo form, in which the soloist presents an entire story by herself by enacting all its characters, was widely known in India during that time.

During the Middle Ages, around the 10th century, bharatanatyam became a style mainly practised in Tamil Nadu, while other, nearly similar sub-categories of this genre evolved in other parts of India. There exists an exceptionally vast amount of literary, sculptural and historical evidence by which the history of bharatanatyam can be reconstructed.

The heyday of bharatanatyam was during the Chola dynasty in the 10th–11th centuries, when the southern temples had hundreds of devadasis in their service to take care of the dance rituals. Court dancers seem to have also practised a similar style. 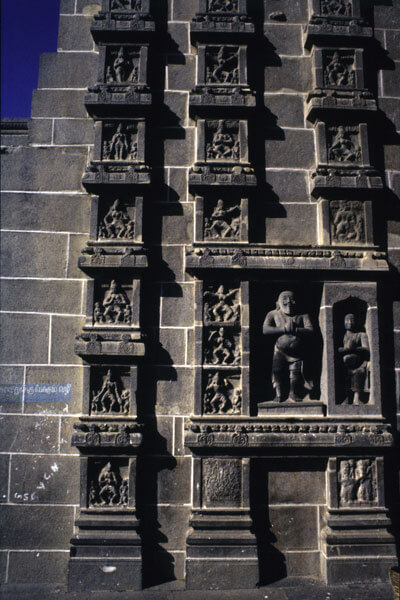 Several of the South Indian temple complexes have reliefs showing the poses of bharatanatyam. The most famous of them are those carved on the 9th century towering gateways of the Shiva temple in Chidambaram. They include ninety-three of the 108 karanas or basic dance sequences described in the Natyashastra.

These small relief panels, together with other similar series and contemporaneous murals depicting dancers, constitute important source material when one is trying to reconstruct the development of bharatanatyam.

Another important phase in the development of bharatanatyam happened in the early 19th century, when four brothers, Chinnayya, Ponnayya, Vedivelu and Sivanandam, shaped bharatanayam’s repertoire. They were all disciples of the composer Muthuswami Dikshitar. The four brothers are also known as the “Tanjavur Quartet”, referring to the city where they worked.

It is believed that the Tanjavur Quartet focused on the solo form of bharatanatyam, which, in fact, had earlier also been performed (and still is today) as a dance-drama, such as bhagavatamela and kuvaranji. They are now nearly extinct, although attempts have been made to revive or reconstruct them.

During the British colonial period the decline of the devadasi institution into prostitution led to a censorship of temple dances, which were finally prohibited by law in the 1920s. The revival of bharatanatyam was started in the 1930s by an upper-caste revivalist, Rukmini Devi, who also gave the style its present name.

Bharatanatyam is today the most widely spread of all Indian dance styles. It is studied and performed around India and abroad. Many brilliant artists have enriched its repertoire, among them being Balasaraswati in the mid-20th century, renowned for her expressive abhinaya technique, and later Alarmel Valli with her exquisite technique. 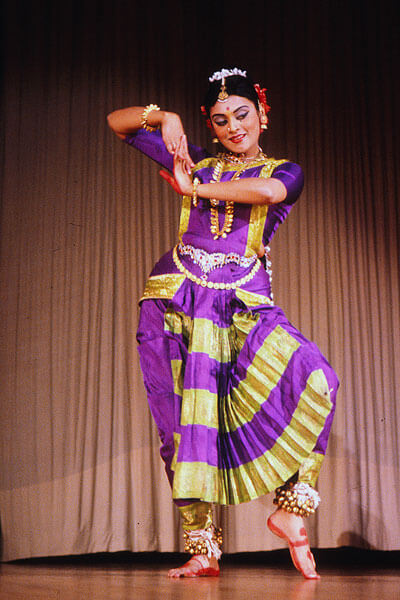 In its tiniest details bharatanatyam technique follows the instructions of the Natyashastra. Like other lasya forms, bharatanatyam also combines the expressive abhinaya mime with pure nrtta dance. Theoretically the dancer’s body is divided into units, such as the head, the torso and the lower body. There are different ways of standing, which dictate the central median and thus the balance of the body.

A co-ordinated sequence of movements, combining the movements and positions of feet, knees, arms, torso, and hands, is called adavu (karana in the Natyashastra). These are divided into nine types, and they form the basis of pure nrtta dance.

In its abhinaya acting bharatanatyam also follows Natyashastra’s instructions. Both mudras, the symbolic hand gestures and the facial expression with its chin, eye, and eyebrow micro-techniques, are employed.

The overwhelming sculptural documentation on bharatanatyam’s history clearly shows that during the early periods the dancers were very scantily dressed. Different kinds of ornaments were worn on the neck, ears, shoulders, wrists and forearms. Otherwise the costume seems to have consisted only of a small loincloth.

It seems natural that bharatanatyam’s nuanced dance technique, which employs the whole body and all the limbs, was indeed meant to be seen in detail, not covered with heavy costume. However, changing moral attitudes, first brought by the Islamic rulers and then by the British colonial administrators, changed the costuming.

Even by the late 19th century photographs of devadasis, who formerly performed bharatanatyam, show them dressed in sari-type costumes. A new kind of dance “uniform” was invented during the period of bharatanatyam’s revival in the 1930s. It consists of a sari-kind of basic dress, which is made suitable for dance by the addition of fan-like extensions to its front, which makes the low bending positions possible.

An important addition to the dancer’s appearance is given by various ornaments, which follow the ancient conventions seen in old sculptures. Furthermore, henna ornamentation is painted on the hands and feet, while fresh flowers decorate the female dancer’s hair.

A bharatanatyam recital is accompanied by classical South Indian Carnatic music. The small orchestra usually consists of a South Indian mrdangam drum, a flute, and cymbals, although other instruments may also be included. The singer has an important role as the leader of the performance by singing the poems of the mimetic abhinaya sections as well as the series of syllables marking the rhythmic patterns of the pure nrtta sections. 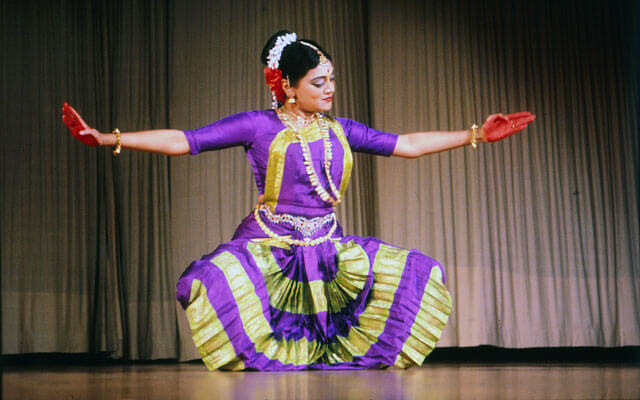 The opening number of a bharatanatyam recital is alarippu, an abstract nrtta number, which introduces some basic elements of the technique Sakari Viika 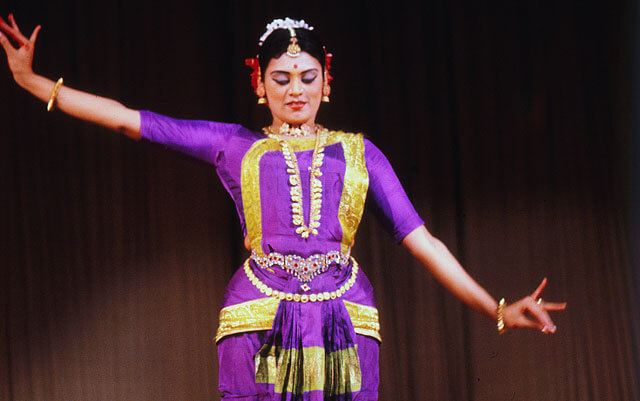 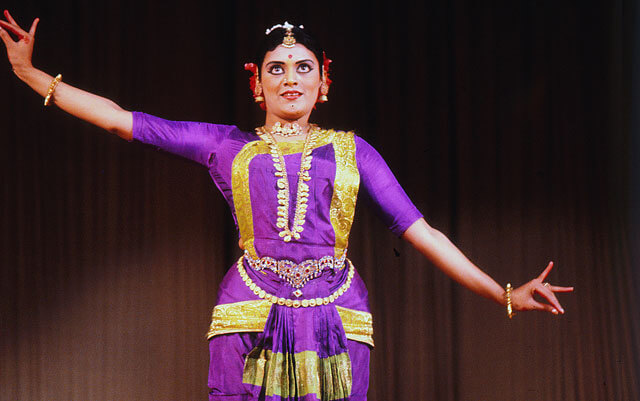 The traditional repertoire of a bharatanatyam recital was to a great extent shaped by the above-mentioned four “Tanjavur Brothers” in the early 19th century. It starts with alarippu, which is a pure nrtta dance introducing different elements of the technique such as the basic stance and its deviations, the foot, arm, and neck movements culminating in the face and eye movements.

After this display of the technique’s basic components follows jatisvaram, another pure nrtta number in which the wider movement patterns are combined with a certain type of melody. In the third part called sabdam, the dancer enacts the poem sung by the singer by means of abhinaya technique. It ends with a short, abstract nrtta sequence.

Once the dancer has introduced, in alarippu, the basic elements of the dance, in jatisvaram the combination of a whole series of movements, and in sabdam the abhinaya technique, follows the fourth part, varnam. It is usually the longest and most intricate of all the numbers. All the elements and sub-techniques that have already been introduced are interwoven when the dancer performs a song, partly improvising.The song usually depicts a short episode related to one of the Hindu gods.

Then one or several padams usually follow. By means of the abhinaya technique they also illustrate poems that usually tell about love, either human or divine. In terms of dance technique padams may seem simple. However, they give the performer a chance to display the mimetic abhinaya technique and elaborate the emotional states.

In tillana, the final number, all the various aspects of bharatanatyam and the themes introduced in the beginning finally dissolve into a firework-like, virtuosic pure nrtta dance.

There is no doubt that the traditional bharatanatyam repertoire covers a vast range of human movements from complicated footwork to various micro-techniques and further to mimetic narration. However, nowadays many dancers also admit its limitations and rigidity. This has led to various attempts to revitalise and enlarge the repertoire. New compositions have been created, the history of the style has been researched, and contemporary themes, such as gender and environmental issues, have recently been included in its themes.