Orissi (also odissi) is the lasya-style solo dance from the eastern state of Orissa. Like bharatanatyam, its technique stems directly from the ancient Drama Manual, the Natyashastra. However, there are slight differences between these two styles. 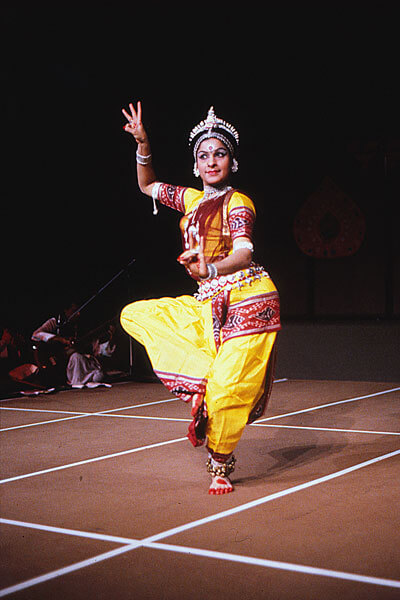 Orissi is the form of lasya from the eastern state of Orissa Jukka O. Miettinen

Where bharatanatyam emphasises symmetry, orissi places more emphasis on curved poses, jumps, as well as hip deflections, which are rather rare in the other classical solo forms. The present form of orissi is a fruit of the Vishnu bhakti movement of the region, which is also strongly reflected in its repertoire.

There seems to be a consensus that orissi is an eastern regional variety of the lasya-type dances mentioned in the Natyashastra. There exists sculptural evidence in a Buddhist cave temple in Orissa from the 2nd century BC, which shows dancers in poses almost similar to those of today’s orissi. 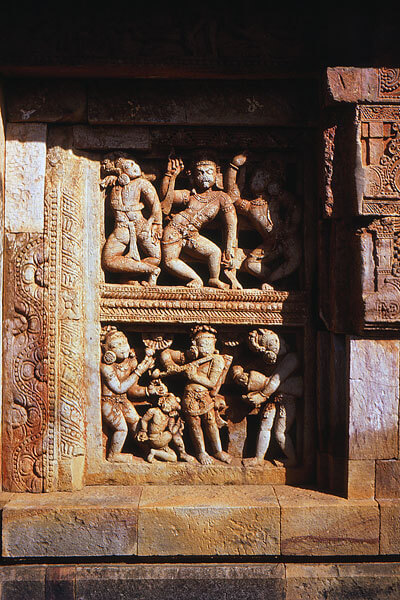 The medieval temples of Orissa preserve many dance-related reliefs. Below is the flute-playing Krishna, to whom many of the dances are dedicated. Above is a dancer with a strongly bent body, a feature typical of orissi even today Jukka O. Miettinen

From the period of the 7th century AD onwards, when Orissa came under Hindu influence, much more written as well as visual evidence exists to throw light on the history of orissi. The magnificent medieval Hindu temples of the region are full of dance reliefs. From the later medieval period, from approximately the 15th to the 17th centuries, orissi manuals are also available.

In content and even in style orissi is strongly influenced by the Vishnu bhakti movement, which started to flourish in the region from the 8th century onwards. The widespread bhakti poem, the Gita Govinda, was written by a local poet, Jayadeva. Thus the Gita Govinda with its Kirishna-Radha theme became an important source for the abhinaya sections or orissi.

In the big temple complexes, orissi was practised by the devadasis, or the female temple servants. However, there was also a temple tradition in which male dancers, dressed as women, performed it. In fact, the tradition of male dancers is rather strong in the orissi tradition even today.

As already mentioned above, technically orissi shares a great deal with bharatanatyam and the other lasya forms simply because they are all offspring of the same ancient tradition. However, the frequent tribhanga (thrice bent) standing positions and hip deflections are characteristic of orissi, as are curved and sometimes relaxed extensions of the upper body. All these tend to give orissi a kind of sensuous quality, not so prominent in the more strict and symmetric style of bharatanatyam.Orissi also employs more elevations, jumps and floor positions. 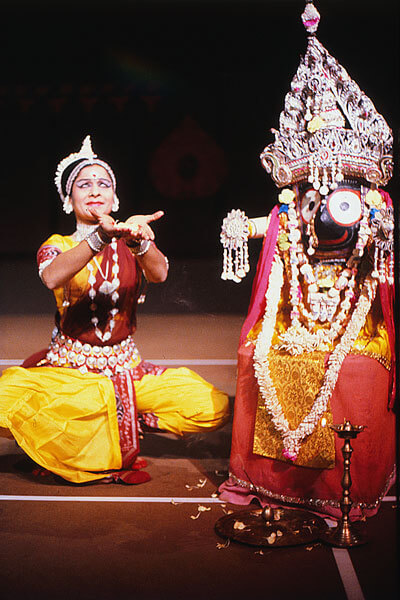 The opening prayer of an orissi recital Jukka O. Miettinen

As in bharatanatyam and the other forms of lasya, the present repertoire of orissi consists of short numbers including abhinaya mime and pure nrtta dance sequences. The performance is preceded by bhumi pranam, which venerates the earth and the ground on which the performance takes place.

The first actual number is batu nritya, a demanding dance, which introduces the whole technical range of orissi. Then follows ista devata vandana, an abhinaya number telling about the deeds of one particular deity, chosen by the dancer.

All the above numbers are accompanied by rhythm only. They are followed by a pure nrtta dance, swara pallawi, in which a raga-based melody is gradually introduced. Then follow one or more gitabhinayas. Like the padams of bharatanatyam, these abhinaya numbers are based on sung poems dealing with love and longing. In orissi they are often based on the verses of Jayadeva’s ecstatic Gita Govinda. 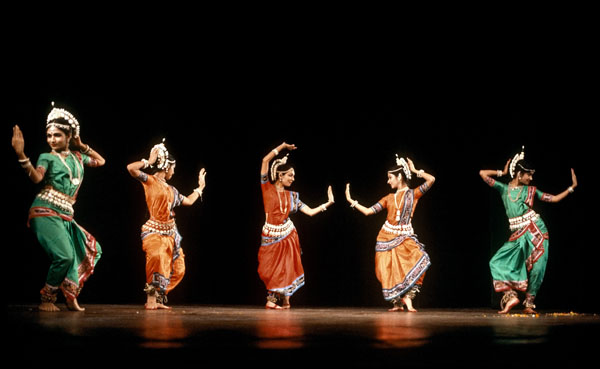 A modern group choreography based on the orissi technique Sakari Viika

Like tillana, bharatanatyam’s final dance, the orissi repertoire’s last big number, tarajan, is also a virtuosic abstract nrtta dance. The Orissi repertoire went through several changes at the end of the 20th century. New poems and music were introduced, and now the performance often ends with mokshya, a dance illustrating the final salvation of a human soul.