Like most of the Southeast countries, Malaysia also has several theatre and dance traditions that still clearly have their roots in indigenous animism. Many of them have flourished in Sabah and Sarawak and at least two in the Malay Peninsula. These two are the healing ritual called main puteri and an indigenous form of sung dance-drama, called mak yong.

Main puteri is a healing ritual with some theatrical features. It has been practised in the state of Kelantan, on the east cost of the peninsula. Its primus motor is a shaman (bomoh), who also often plays a three-stringed rebab violin. With his or her assistant the shaman aims to heal a patient by personifying the illness as a malevolent spirit.

Main puteri has features common to some other animistic ritual performances around Southeast Asia and even Sri Lanka. This seems to confirm the fact that it is indeed is a tradition originating from pre-Islamic times. It may also reflect the Tantric belief-system, common in regions before the arrival of Islam.

The rituals usually take place at night. Hours of prayers are followed by invocations and offerings. The actual healing ritual is saved until just before the dawn, when the spirits are believed to be forced to withdraw from the human world. The main puteri ceremony is accompanied by a small orchestra. The ceremony usually takes one whole night to perform, sometimes even several nights.

The theatrical features of a main puteri ritual include dances accompanied by singing and an orchestra. The spirit’s arrival is made known by the change of the dance style towards uncontrolled, jerky trance movements. Then follows the actual communication with the spirit including offerings and negotiations by the shaman. This dialogue-like communication with the spirit of the illness may last long and it often includes even obscene humour.

The Malays are the largest individual ethnic group in modern-day Malaysia, but they have only a few drama traditions of their own. The most sophisticated, albeit rarely performed, tradition is mak yong, an ancient form of sung dance-drama from the state of Kelantan. In the 20th century it gradually developed into a folk form, usually performed by the wives of rice farmers in remote areas in Kelantan.

Mak yong is believed to be derived from ancient shamanistic healing rituals, and even today its performances are regarded as having magical significance and a special healing effect. Sometimes it is actually performed combined with the healing ritual described above, main puteri.

Present-day mak yong combines indigenous rituals with elements borrowed from Indonesia, the Near East, and the nora tradition of Thailand. It has a vast repertoire consisting mainly of dramatised folk-tales. The performances combine dialogue, hypnotic music and singing with dance and are staged under small bamboo roof structures open at the sides.

It is generally agreed that mak yong evolved from indigenous animistic rituals. Later it became popular folk dance-drama, accompanied by an orchestra including a rebab violin, bronze gongs and drums. Its music consists of 35 fixed-type melodies including extremely expressive singing. In the 1920s its popularity led, for a short period, to close ties with the Kelantan court and its cast grew to 20 dancers, singers and musicians. After this, in the 1970s, commercial mak yong groups also performed for a short time.

The repertory of mak yong includes 12 stock stories. One of them, Deva Muda, a kind of “original” mak yong legend, gives a mythical explanation of how mak yong was created. It also represents an indigenous literary tradition without traces of outside influences. As is often the case in Asia, the stories are rarely staged from the beginning to the end. Selected scenes from the basic stories, already familiar to the audience, are enacted, and much space is given to the improvisation. 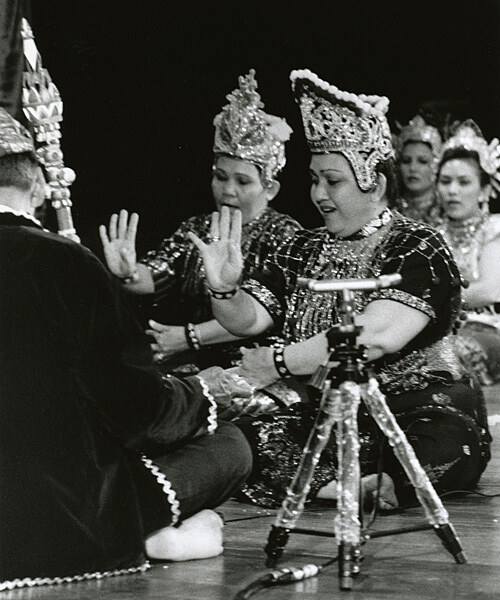 The performance starts with rituals, in which, among others, the rebab violin, the leading instrument of the orchestra, is venerated. After the formal ceremonies the traditional opening melodies are played. The actual drama proper usually starts with an audience at the palace. After the introduction of the story’s main character the actual drama starts.

Since the early 1900s female performers have been seen in all the leading roles of mak yong, including the heroes (pak yong) and the heroines (mak yong). Male actors can, however, appear in minor comic roles. Thus the hypnotic songs, characteristic of the genre, are always sung by actresses.

All the actors are present through the whole performance. The leads, the supporting choir and the orchestra sit in a circular formation. The most dramatic scenes take place inside this circle. Long songs are sung either in a couching or a sitting position.

No stage decorations are employed, but some stylised stage properties, such as a sword, a dagger etc. may be used when necessary. Scene changes are announced by means of dances, which are performed inside the circle. The solemn female dance technique includes few symbolic hand gestures, reflecting the influence of Indianised culture. The dances of the males are more lively and accentuated in character.

Originally the mak yong performances lasted for several days, sometimes even weeks. Nowadays the performances usually start at around 8 PM and end at around midnight. At present, mak yong is very rare, high-quality performers are becoming scarce, and even recordings of mak yong, either on CD or DVD seem almost impossible to find in Malaysia.