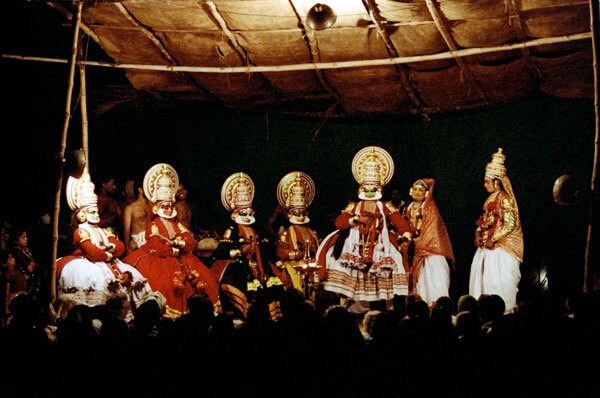 Kathakali (Story Play) is probably the best-known form of Indian dance-drama all over the world. It evolved in the 16th century out of the kutiyattam tradition, and krishnanattam took its energetic footwork from the kalaripayattu martial arts tradition, which has been discussed above. Gradually kathakali’s system of make-up and its costuming reached their present spectacular forms. 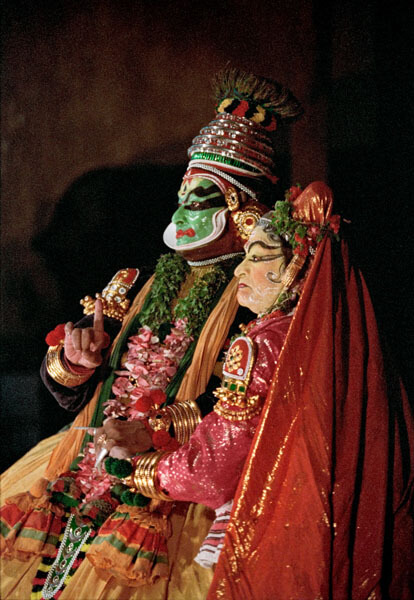 A hero and a heroine Sakari Viika

Kathakali was originally an art form practised by the Nair warrior caste. It is still generally performed by an all-male cast (although one female troupe also exists). Following the path opened up by kutiyattam, the actors do not speak or sing but concentrate on dance sequences and particularly on the intricate abhinaya acting.

Kathakali evolved in the late 16th century from older forms, such as kutiyattam, krishnattam, and kalaripayattu martial arts. Its direct forerunner was the form called ramanattam, which concentrated on the life of Prince Rama of the Ramayana epic. Ramanattam is now extinct but its heritage is carried on by kathakali.

Kathakali was gradually developed by master actors as well as art connoisseurs, including rulers and learned Brahmans. Its golden age was the latter half of the 18th century, when Maharaja Kartika Tirunal (1758–1798) wrote several plays for kathakali and a permanent palace troupe was formed.

Some five hundred kathakali plays exist, of which some fifty have recently been actively performed. The playwrights came from the uppermost levels of society, and among them were several rulers and learned Brahmans. Originally, scenes from the Mahabharata epic were dramatised as kathakali plays. Later, the Ramayana and the Puranas also provided material for the plots. The language used in kathakali is “high” Malayalam, which combines Sanskrit with vernacular Malayalam.

The Space for the Performance

Kathakali was not limited to performances only in the kootampalam temple theatre houses, as were kutiyattam and krishnanattam. At the moment kathakali is performed in several kinds of spaces. The most common are open spaces in a village or a town, often in front of a temple. Just as in kutiyattam, the acting focuses on a large oil lamp, which is placed in the foreground of the stage. 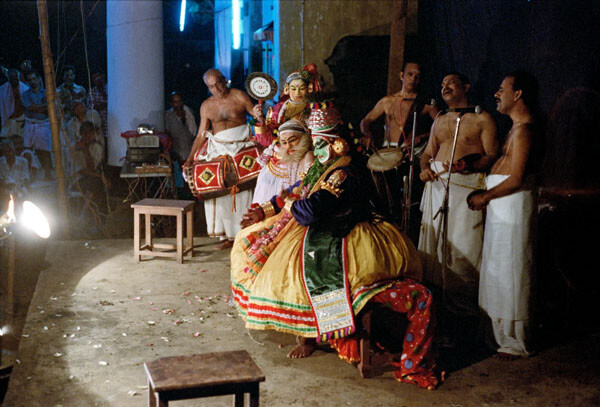 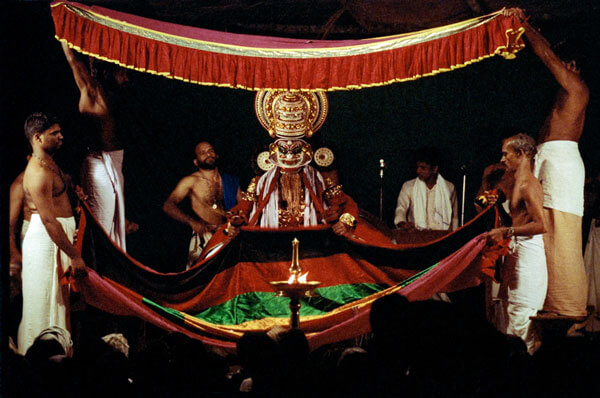 Important characters introduced from behind a hand-held curtain Sakari Viika

The stage can be just earthen ground, but is now more often an elevated temporary structure. The oil lamp still serves as the focal point of the performance although electric lights are now commonly used.

No sets and very few stage props are used. A wooden stool can serve as a seat, a throne, a mountain etc. Just like kutiyattam, important characters are introduced from behind a hand-held curtain. These highly dramatic introductions are carried out according to the type of the character. A lyric character may simply be slowly revealed while an aggressive character may violently pull the curtain down himself.

The orchestra accompanying kathakali includes four musicians. The main instruments are two different types of drums and a gong, played by the leading singer. His assistant plays the cymbals. For special effects a third kind of drum and a conch shell are used. The musicians stand on the left side of the stage. An inseparable element of the auditory whole is the dynamic rattle of the small bells attached to the pads tied around the actors’ calves. 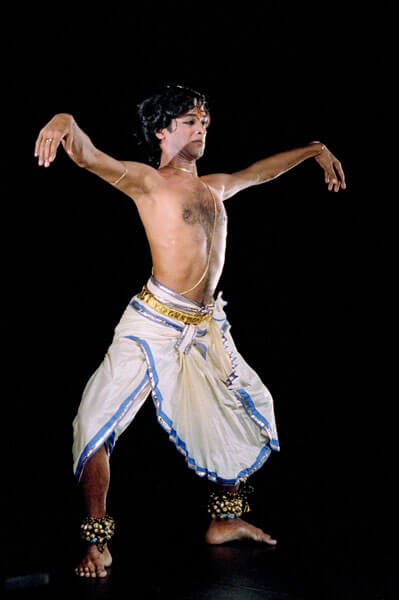 The kathakali actors come mainly from the ancient Nair warrior caste. The study and training to become a professional actor takes from 8 to 10 years. The training starts with vigorous physical exercises. During the years the body is made elastic by massage with medicated oils in order that the student will attain the right elastic basic stance, which includes a strongly bent back and a wide-open leg position, both derived from the kalaripayattu martial arts technique. 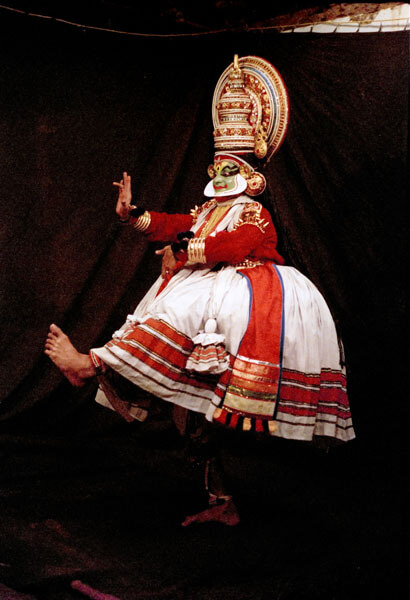 Of utmost importance is the coordination of the mudras, the body movements and the eye technique Sakari Viika

The basic training includes rehearsing of the eye movement in the early hours of the morning. The training of the facial expression also includes separate exercises for brows, lips, mouth, neck, and cheeks. In the daytime the students exercise body movements, gesture language and various combinations of steps and their co-ordination with the music. 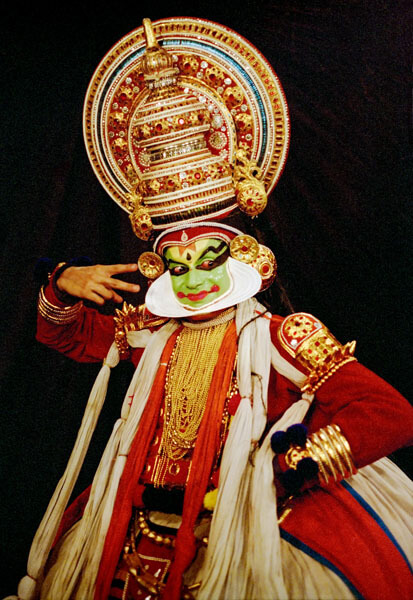 The acting culminates in the eye movements Sakari Viika

The actual focus of the whole acting is on the execution of the mudras, the symbolic hand gestures, in perfect co-ordination with the facial expression, especially with the exaggerated eye movements.

The more physical aspects of the body language, such as vigorous stamping on the outer side of the sole, adapted from kalaripayattu, and the high jumps that this special foot technique enables the actors to perform, are partly hidden by the heavy skirt-like lower garments of the actors. They are rather sparsely used during an entire play, yet their dynamism always amazes the spectator.

Character Types and their Make-up and Costume

Unlike the situation in kutiyattam, where all characters tend to have their own individual make-up, in kathakali the characters are divided into clear role categories. They are basically four in number. All of them have their own basic make-up styles developed over the centuries from the make-up systems of kutiyattam, krishnanattam, and ramanattam. 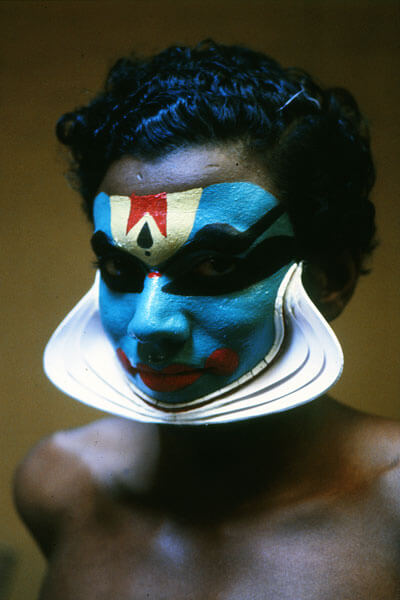 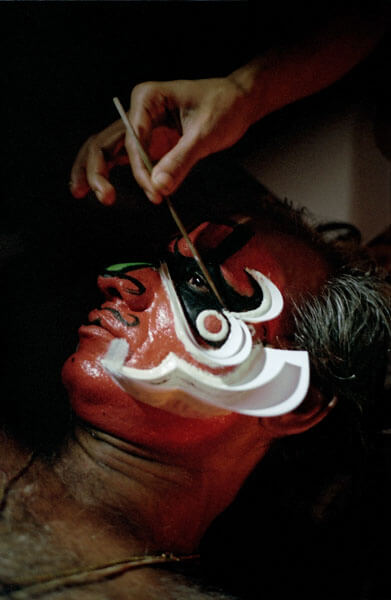 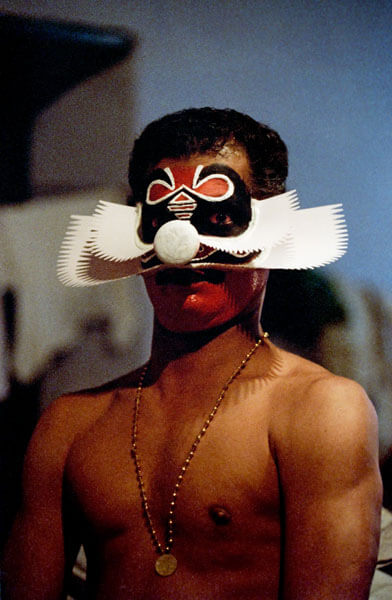 Katti-type make-up with large white chutti boards. Earlier, the boards were made solely of rice paste, but nowadays ready-cut paper chuttis are often fastened to the rice paste base Sakari Viika 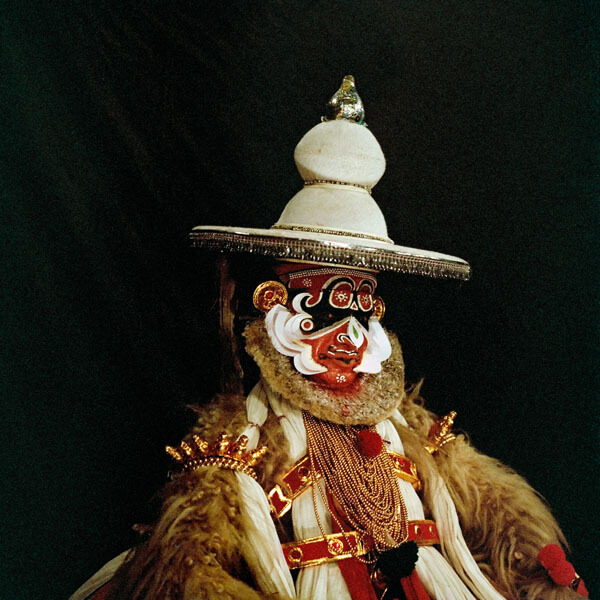 The monkey god Hanuman is one of the positive, white-bearded tadi characters Sakari Viika 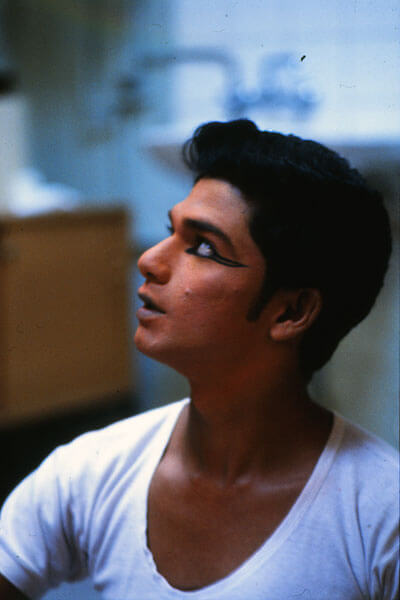 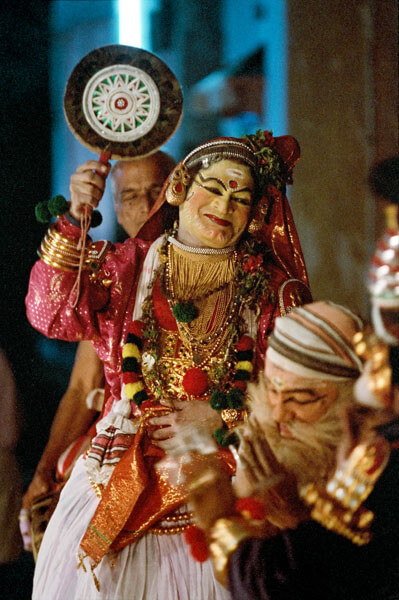 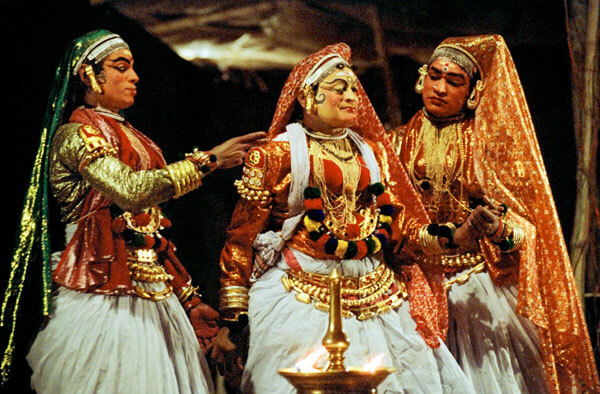 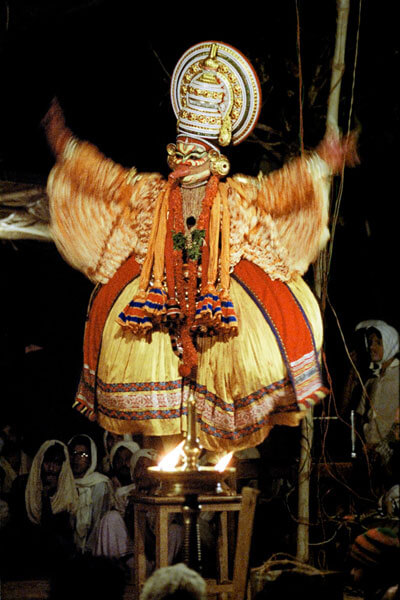 Besides the basic characters with their fixed make-ups, there are also special characters, such as the mythical bird, with their particular costuming and make-up types Sakari Viika

(There are also some special characters with their own unique make-up types and some few characters even wear masks.) 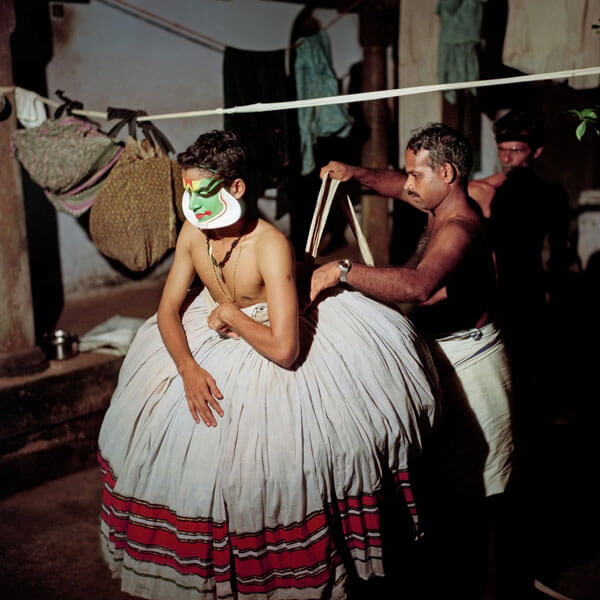 All the role types, except the minukku characters, wear a heavy, skirt-like lower garment Sakari Viika 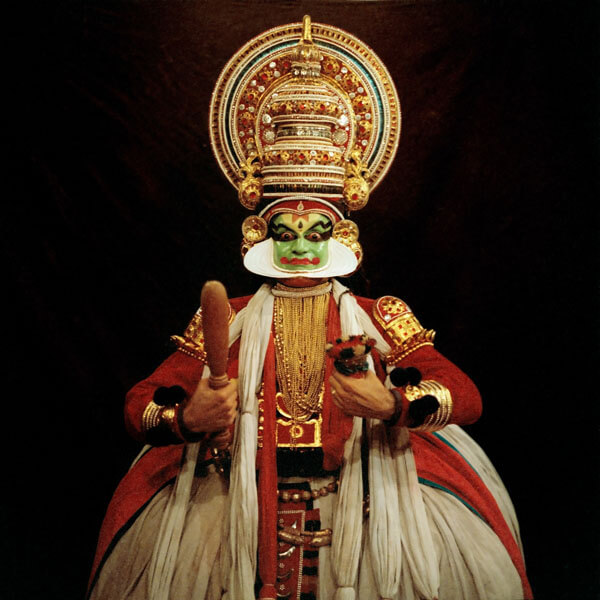 Most of the characters wear a heavy crown with a halo. The crown and most of the ornaments are made of gilded wood and they are decorated with coloured stones Sakari Viika

The costuming and ornaments are more elaborated than those of kutiyattam. The skirt-like lower garment, used by all role categories except the minukku type, is voluminous and constructed of several layers of heavy cotton. The upper body and arms are covered with a loose, red jacket.

Heavy ornaments, mostly of gilded wood with coloured stones, are worn on the neck, ears, shoulders, wrists and forearms. Long, white and red scarves are worn around the neck. Most of the characters wear a heavy, gilded wooden crown with a round halo (kireetam), decorated with green and red stones. Silver nails are worn on the fingers on the left hand.

To Become a Character 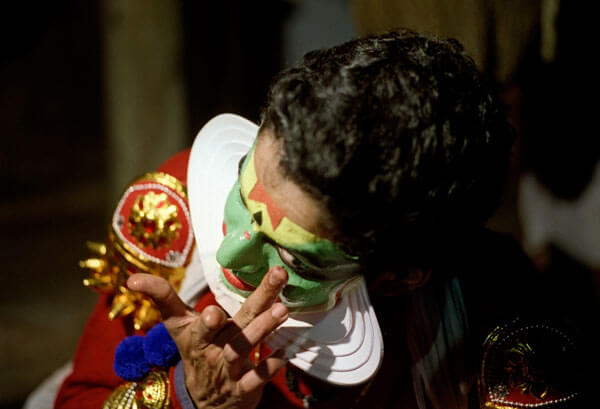 To prepare the make-up of the main characters may take as long as three hours. The finishing touch is done by dyeing the eyeballs red with a seed of a certain plant. During the make-up process, the actor slowly becomes transformed into the character of the play.

When the make-up is ready, the actor puts the crown on his head. After that, he no longer speaks, because he is no longer his ordinary self but an embodiment of the character he is playing. It is said that an actor whose personality is discernible after the make-up has been applied is not a good kathakali actor.

The stylised, silent acting technique, the sudden powerful jumps and kicks, the overwhelming costuming with its glittering details, and the completely non-naturalistic make-up make the actors, indeed, look like visitors from another world.