Pavakathakali, Kathakali as a Puppet Play 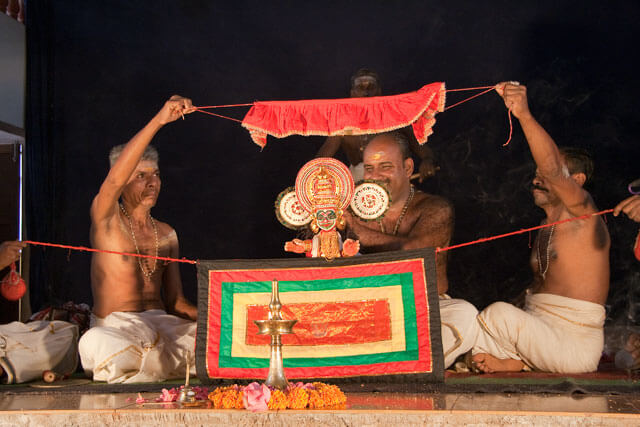 In all of its conventions and details pavakathakali is kathakali in mini-size Jukka O. Miettinen

Pavakathakali is a mini kathakali adapted for glow puppets. It evolved in the 18th century when kathakali became popular in the Palghat region, which already had its own glow puppet tradition. The performers belong to the Telugu-speaking population, although the language of the performances is local Malayalam.

Nowadays the puppets are about half a metre high. Their faces, headgear, hands and feet are carved from wood and painted according to kathakali practice. A mini version of the kathakali costume, made of wool and cotton, form the body of the puppet, inside which the puppeteer puts his hand. 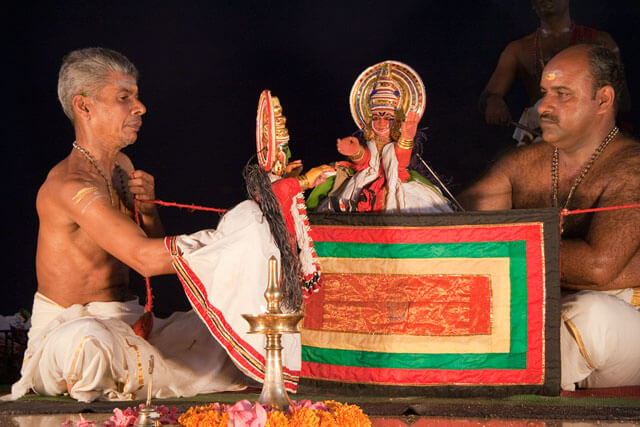 The performance is accompanied by musicians, just as in real kathakali. All the performers sit on a small, elevated platform facing a mini-sized oil lamp. All in all, a pavakathakali performance requires at least six performers, including the musicians.

The apotheosis of the god Vishnu Jukka O. Miettinen

In the mid-20th century pavakathakali was a declining art form, but recently there have been attempts to revive it. It has also been performed in international puppet theatre festivals outside India. Now the trend is to make the puppets, in their tiniest details, resemble the actual kathakali actors.