Korean shamanism covers magic-religious rituals, both communal and private ones. In these rituals the focus is on both the shaman’s (mudang) individual experience as well as on the shaman’s hereditary abilities to contact the spirit world, inhabited by various shamanistic gods. 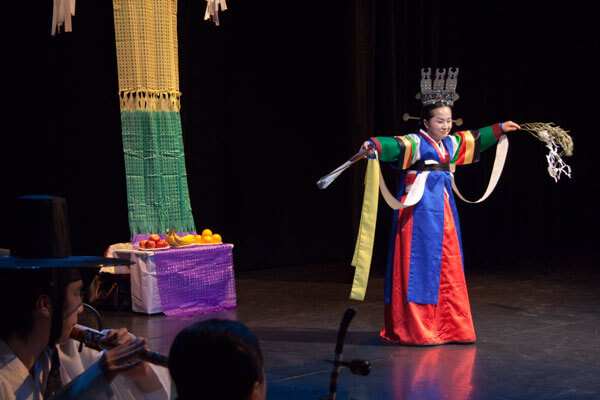 A shaman, accompanied by a small orchestra, dances in front of offerings Jukka O. Miettinen

With its history of some five thousand years, shamanism is the oldest belief system in Korea. The Koreans agree that their shamanistic tradition stems from Central Asia and is connected with the above-mentioned Northern Shamanistic Belt, connecting Korea with Central Asia, Siberia and northern Scandinavia.

Although during certain periods shamanism has been regarded as a form of “low” folk culture, it has never completely disappeared in Korea. After the re-evaluation of Korean cultural identity in the mid-20th century, it was agreed that shamanism formed the earliest stratum of Korean culture.

Nowadays shamanistic rituals are still part of everyday life, both in agrarian and more urban surroundings. The construction works of modern skyscrapers, for example, are inaugurated with shamanistic rituals, while several of the “classical” music and dance traditions clearly reveal their origins in shamanism. Furthermore, many contemporary artists come from old shaman families. 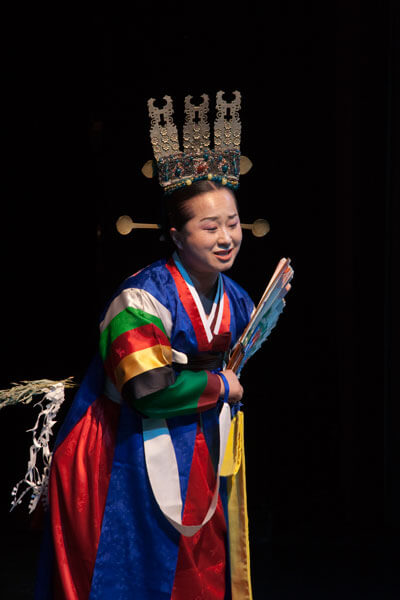 A person can also become a shaman through a mystical experience or a so-called “shamanistic illness” (sinbyeng), after which an initiation ceremony is required. This kind of shaman, “chosen by the spirits”, is called gangsinmudang.

They often have the ability to go into a trance and thus they are able, for example, to dance on sharp knives etc. The hereditary shamans do not involve themselves in this kind of extremes. Their main duty is simply to take care of the shamanistic gut rituals.

Shaman families have often given their offspring training in music, dance or other forms of art. So even today many important artists come from shaman families. Nowadays most of the shamans are women, while the musicians accompanying them are men.

The nuclear of Korean shamanism is the gut ceremony. It can be a private, individual ceremony, which, for example, is aimed at curing a disease, ensuring longevity or paving the way to the after-world. This kind of ceremony can also be addressed to a deceased person.

A gut ceremony can also be a grandiose, communal happening. A village gut may, for example, aim to ensure a good harvest, or luck for the fishermen, or to cure an epidemic illness. Serious, ritualistic sections are combined with more entertaining dance and music numbers.

The audience also participates in the ceremony. The shaman often addresses her comments directly to the audience, which, every now and then, takes part in the dancing and singing.

In principle a Korean shamanistic ritual is divided into 12 sections. Most of the rituals share, more or less, the same structure and functions. However, there are many regional variants of the gut ritual. They are usually named after the village or the region in which they are practised.

One example of the communal ceremonies is the Namhaean Pyolsin-gut, a village gut ceremony from the southern coast of the Korean Peninsula. In its larger version it takes a week to perform, while a shorter version lasts three days. 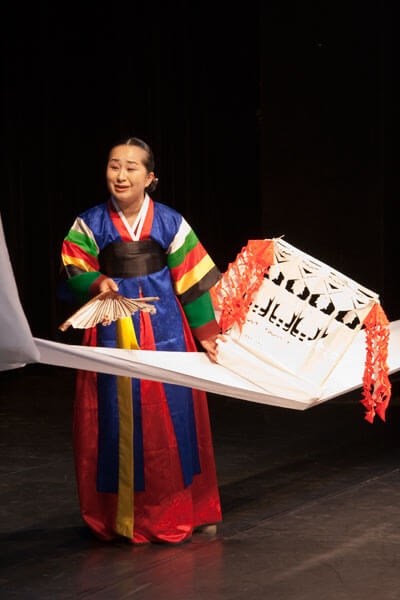 A shaman leads the human souls, in the form of a paper boat, along the road to the other world, represented by the white cloth Jukka O. Miettinen 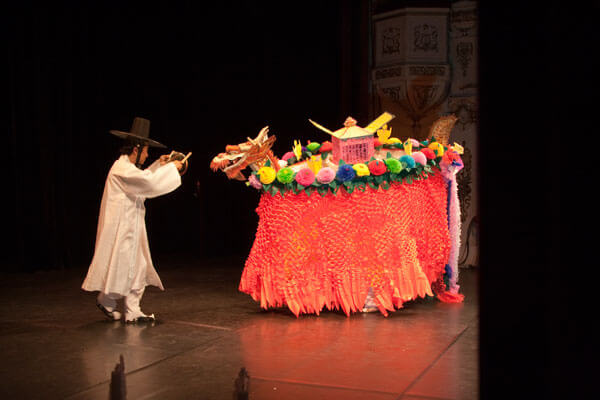 The play of the Dragon Boat, which is the vehicle to reach nirvana Jukka O. Miettinen

The primus motor of the ceremony is a shaman, taemo or a “big shaman”. She is accompanied by a small orchestra, which includes an oboe, a flute, drums, and a gong. The musicians also usually come from shaman families.

The numerous sections of the long ceremony aim, for example, to pacify deities of the road, to inform the village tutelary deities about the ceremony, to welcome the sun, to purify the ritual space, to pray for a good harvest, to ask for good fishing, to request safe waters for the fishermen, to pray for one’s ancestors’ well-being, to pacify the dead, and to pray to Buddhist guardian deities for peace.