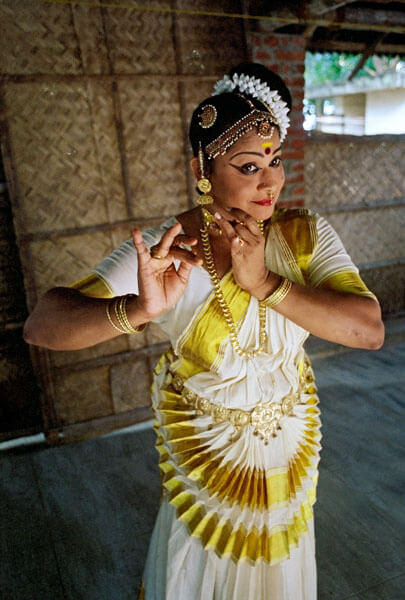 Mohiniattam, a form of devotional bhakti art, often deals with events in the life of Lord Krishna Sakari Viika

Mohiniattam is Kerala’s version of the soft, lasya style dance, performed most often by female dancers. Several regions of India have their own variants of this kind of Natyashastra-related “temple dances”.

They were originally performed by the devadasis, or the female temple servants, who were given to the temple to be “married” to the deity of the temple. The devadasi institution is closely linked with the devotional bhakti sect of Hinduism.

Mohiniattam is characterised by the gentleness of its style, by the gliding movements of the body, and by the white, gold-bordered sari-like costume of the dancers.

Lasya-style solo dances have a long history in Kerala. After the decline of the devadasi institute, or tevidichi institution in Kerala, the old dance forms were tainted by the bad reputation of their performers.

The lasya-style “temple dances” were renamed mohiniattam, “Mohini’s dance”, possibly owing to the adaptation of the Vishnu bhakti cult in Kerala in the 15th century. Mohiniattam refers to the name Vishnu assumed when he transformed himself into a female dancer.

Mohiniattam was first mentioned in literary sources in 1709. In the next century Maharaja Swati Tirunal composed dance numbers in the mohiniattam style and established mohiniattam’s status as Kerala’s classical lasya dance.

During the same period mohiniattam repertoire and style were shaped according to the bharatanatyam tradition, the famous lasya style of Tamil Nadu. In fact, one of the so-called “Tanjavur brothers” or “Tanjavur Quartet”, important reformers of bharatanatya, is believed to have visited Kerala and given mohiniattam its finishing touch.

In the 1930s Kerala’s national poet Vallathol chose mohiniattam to be included in the syllabus of Kerala Kalamandalam, the state performing arts academy he founded. This cemented mohiniattam’s reputation as the famous lasya dance style of Kerala.

The Technique and the Repertoire 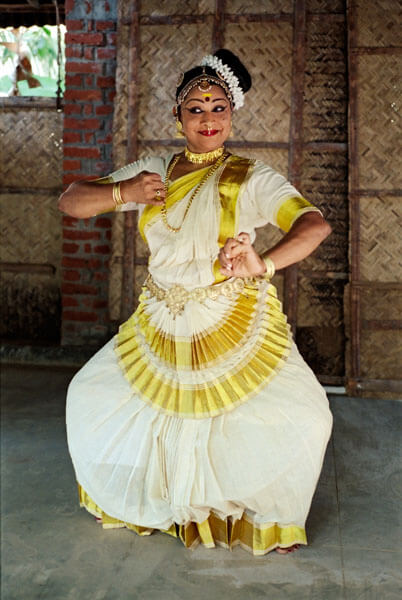 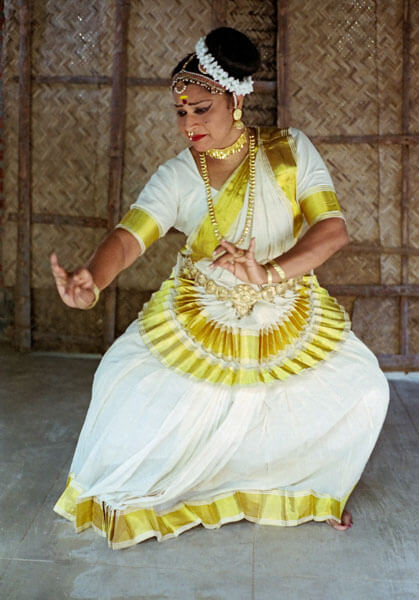 The repertoire consists of short dance numbers, both mimetic abhinaya sections and pure nrtta dances. Some of the numbers combine both of these techniques. A performance starts with a prayer and then follows an abstract invocation dance, alarippu. After that follow various numbers such as the demanding jatisvaram, usually the highlight of the performance. Various padams or mimetic abhinaya numbers are based on songs, while the performance usually ends with tillana, a virtuoso abstract dance.

Although there is a lot in common in baharatanatyam and mohiniattam, there are also clear differences. While bharatanatyam aims at symmetry and a kind of geometric angularity of poses, mohiniattam stresses the softness and sensuality of movements. The poses tend to curve from side to side and the style has a kind of gentle, gliding quality. The torso is used circularly and half-bent positions are frequent. Thus Mohiniattam bears a clear resemblance to the dance of kathakali’s female characters.

As in most of the bhakti-related lasya dances, the focus of the sung abhinaya parts is on the hero/heroine polarity. The dancer represents the longing lover of a hero/god while this earthly love serves as a metaphor for the yearning of the human soul to be united with God.

The music played with a drum, veena and cymbals is in the gentle sopanam style, a bhakti tradition typical of Kerala. The bhakti poetry is sung in local Malayalam. The dancer’s gold-bordered costume is that of a bride. In all its aspects, such as music, its hero/heroine themes, and its touching tenderness, mohiniattam represents the spirit of bhakti in its purest form.