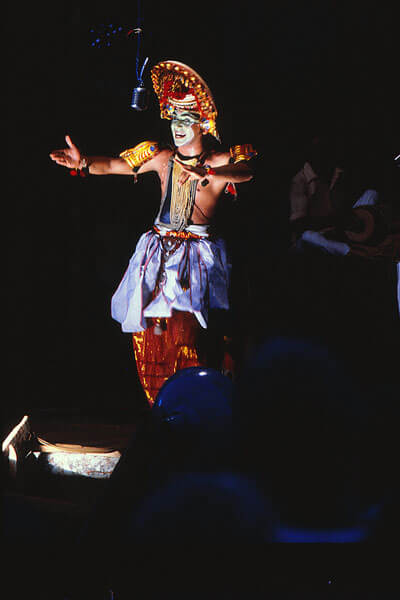 Tullal (“jumping”) refers to a form of one-man dance-theatre as well as to a literary tradition created for it. The tradition is said to have been invented by an exceptional actor-poet in the early 18th century. Tullal has three subcategories. All of them are characterised by a certain kind of poetry and dynamic performance style. In its straightforwardness Tullal represents folk theatre, which, however, employs elements of classical acting technique.

It is generally thought that tullal was the invention of one man, Kuchan Nambiar, who was active in the mid-18th century. Legends surround this exceptional individual. Originally he was neither a professional dancer nor a poet. It is said that his genius lay in his inclination to become possessed. It seems, however, that he wrote dozens of tullal texts and was patronised by two rulers.

As has already been mentioned, tullal refers both to theatrical genre as well as to the texts, written in Malayalam with a particular metric mode. Kuchan Nambiar used themes borrowed from the Mahabharata, the Ramayana, and other stories that already existed, but he gave the themes a surprisingly contemporary angle. Thus tullal, indeed, is a typical form of popular theatre, intended to be directly understood by all kinds of audiences.

Later, several authors created tullal texts, but of the approximately 100 texts some ten are now actively performed, all of them attributed to Kuchan Nambiar.

Although tullal can be regarded as a form of popular theatre, its music is far from being simple. Rhythmically it is very intricate, while its singing style employs Carnatic ragas, although in simplified forms. 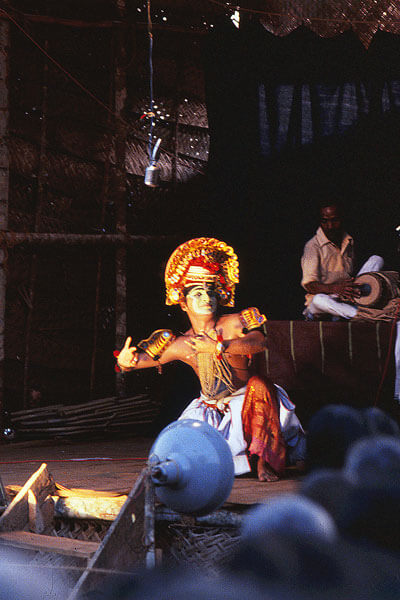 A tullal actor employs the mimetic abhinaya acting technique while he sings his lines at the same time Jukka O. Miettinen 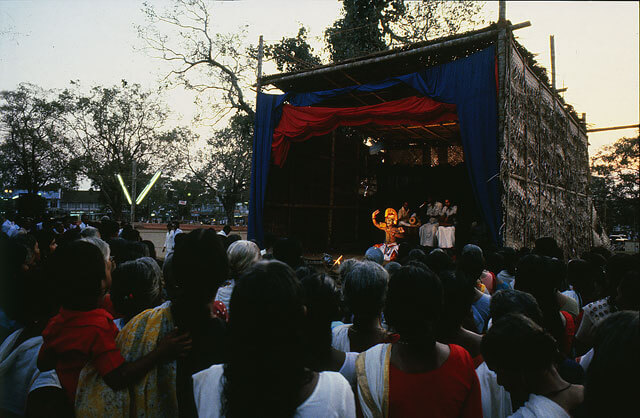 A temporary tullal stage in front of a temple in Central Kerala Jukka O. Miettinen

Although tullal is predominately a verbal form of art, it employs, however, the gesture language derived from the local manual Hasta Lakshanadeepika. The gestures and the abhinaya mimetic acting, as a whole, are executed in a more or less sketchy manner.

Thus the tullal style acting is a combination of abhinaya acting, dancing, and singing. It is a demanding technique, since the performer must sing and dance simultaneously. Besides that, he must be able to memorise long poems and be able to improvise on them.

As in most of the theatrical styles of Kerala, the actual performance in tullal is also preceded by preliminary rituals and ceremonies. They include intricate nrtta or non-descriptive dances, one of them danced with the performer’s back turned to the audience.

There are three types of tullal with their own costume and make-up styles. Ottan tullal is characterised by facial make-up similar to the paccha make-up of kathakali, with a green base and white borders made of rice paste (chutti). The headgear is a kind of a crown in the form of a many-headed snake.

The dancer in parayan tullal also wears headgear with a snake motif, but the make-up is simpler than in ottan tullal. The eyes are made expressive with black outlines while the dancer’s body is covered with sandalwood paste.

In seetankan tullal the costume bears similarities to the archaic teyyam costume. The crown-like headgear is constructed from palm leaves while the ornaments resemble live flowers.