Sbek thom (large leathers) is an ancient form of shadow theatre in which dancing puppeteers perform scenes from the Reamker, or more rarely the Buddhist Jataka stories, by presenting cut-out hide figures against a semi-transparent cloth screen. It is an exceptional and clearly very archaic form of shadow theatre. Its only “sister” form is the nang yai of Thailand. Both of them have been performed in temples and various ceremonies related to communal festivities.

How these two traditions are related is, however, not known. It is possible that the tradition was adopted by the Thais among the other elements of the Khmer culture. On the other hand, it is also possible that it spread from the kingdom of Auytthaya to Cambodia during the period when Cambodia or part of it was a vassal state of Thailand. There are, however, slight stylistic differences between the Thai nang yai and the Cambodian sbek thom figures.

In most Asian shadow theatre genres the puppets are rather small cut-outs of human figures often with movable limbs. The nang sbek thom puppets, on the other hand, are large, 1–2-metre-tall, almost round non-articulated leather silhouettes, in which the characters from the Reamker are engraved as if in a frame. Besides these large leather figures, there are also smaller puppets, sometimes even with movable limbs.

A large screen, some 10 metres wide and some 4 metres high, is erected on poles approximately 2.5 metres above the ground. Often in front of the screen are the musicians of the traditional Cambodian pin peat orchestra, consisting, as in the Thai piphat orchestra, of oboes, xylophones, gong sets, and other percussion instruments. Sitting and sometimes standing among the orchestra are the narrators, who recite and sing the text that the silhouettes enact on the screen. 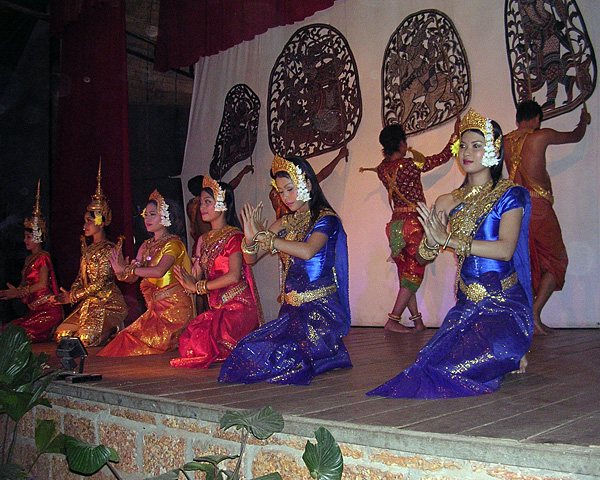 Two sbek thom troupes are known to have been active in the first half of the 20th century, one in Phnom Penh and one in the city of Battambang. Later, the government set up several sbek thom companies. Today sbek thom is often combined with dance and other theatrical forms in innovative productions as well as in tourist shows.

Besides sbek thom, Cambodia is home to another kind of shadow theatre, sbek touch. The puppets of sbek touch are smaller than the large figures of sbek thom and they often have movable limbs. Sbek touch is clearly related to the southern Thai nang talung and its sister forms in Malaysia. In all of these traditions the puppets are manipulated by one puppeteer, who also acts as the narrator for the whole performance.