The Kandyan, or up-country (udarata natum), dances, are regarded as the classical dance tradition of Sri Lanka. Kandyan dancers are traditionally performed only by male dancers. The technique, partly derived from South India, focuses on dynamism, powerful footwork, leaps and whirls. It has a vast repertoire, partly originating from an ancient indigenous ritual dance, partly influenced by South Indian dances. 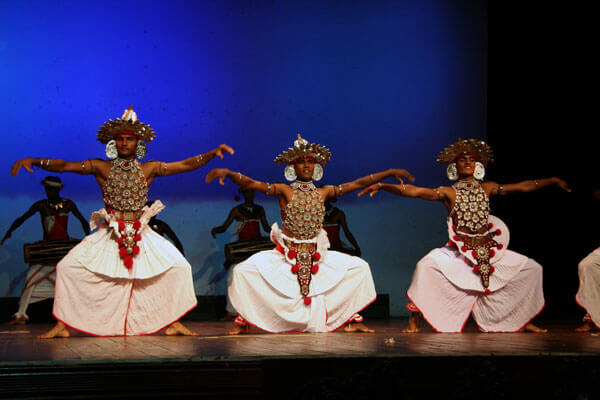 The ves dance is the most famous of the Kandyan dances Jukka O. Miettinen

Kandyan dances are now probably the country’s most important cultural export. However, the most spectacular performances can still be seen in a religious context, particularly during the annual Kandy Perahera procession in the city of Kandy.

It is generally agreed that the roots of Kandyan dances lie in an ancient village ritual, called kohomba kankariya. It has been an important folk ritual of the regions of the Kandyan kingdom. It combined dance, music and dance

Like most of the birth legends of Sri Lankan theatrical traditions, the story of the origins of kohomba kankariya also tells us about the intervention of supernatural beings to cure a king. The original ritual is rare nowadays, but some of its dances are included in the repertoire of Kandyan dances.

The South Indian form, and particularly the influential form of Kerala (read more about the traditions of Kerala), is said to have arrived during the early 18th century, when the King of Kandy invited dancers and musicians from Kerala to his court.

However, it is possible that it was only one more wave of Indian influence, since probably some of the Buddhist music and dance traditions may have already been adapted from India in the centuries BC when Buddhism was received in Sri Lanka.

In 1955 the technique of the Kandyan dances was standardised for the use of schools and art universities. Kandyan dances are now also performed at secular social festivities as well as in dance shows, aimed at either local audiences or tourists.

Kandyan dances were traditionally taught by gurus and guru lineages. This system allowed some variations in the technique. However, since the mid-1950s a standardised teaching method has been formulated. It includes twelve foot bar exercises for the feet, and twelve exercises without the bar. 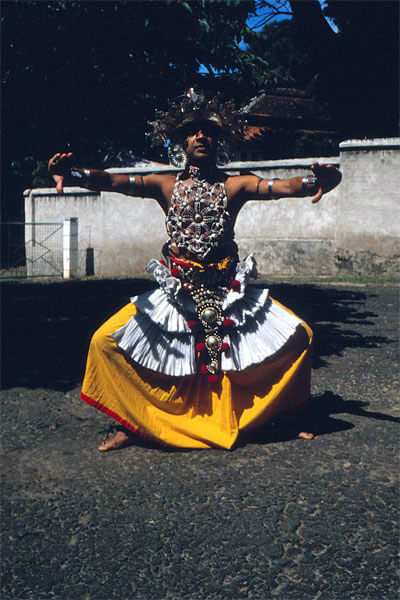 In one of the basic poses of Kandyan dance the back is bent, and the legs are in a very open position, while the arms are at shoulder level and the fingers are stretched forwards Jukka O. Miettinen 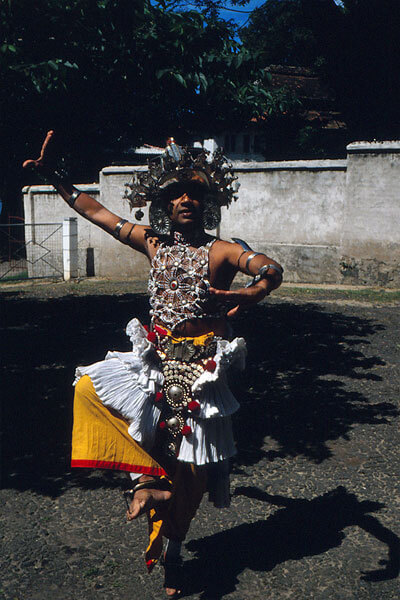 To master the technique, serious students must learn 18 vannams, or basic dances, which have both a loose literary content as well as fixed emotional states. The term vannam is derived from the South Indian musical system but it seems that the concept was localised in Sri Lanka to form the Sinhalese vannam system, which, in its movements, imitates various animals. 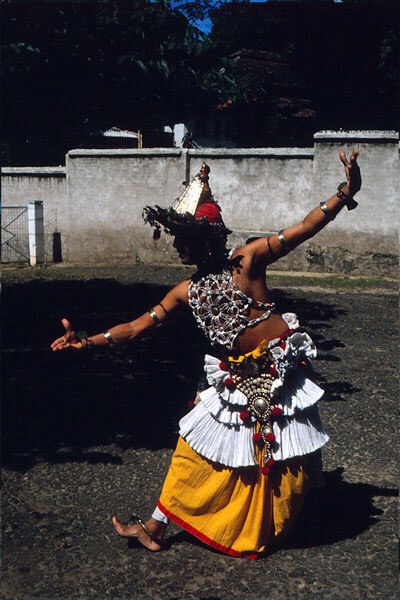 Another basic pose of a ves dance Jukka O. Miettinen

If it is analysed from the Indian point of view, it is clear that the Kandyan dances represent the energetic, masculine tandava type of dance. The emphasis is on the extremely energetic footwork. In the basic position the space between the open legs almost forms a square, a position that first appeared in Indian dance imagery at some time during the 1st or 2nd century AD, and later spread to Southeast Asia.

This extremely open-leg position enables the dancer to move his torso from side to side, while it also forms a firm base for jumps, whirls, and summersaults, so characteristic of many of the Kandyan dances.

Furthermore, if compared with the Indian dance, Kandyan dances seem to belong to the pure, non-narrative nrtta numbers. This, however, is not completely true, since the vannams, discussed above, each have their own emotional content.

The facial expression of the Kandyan dances is not as detailed as in Indian abhinaya mime. However, the eyes seem to follow the hands and there are even some stylised eye movements. In the most spectacular ones the dancer’s eyes roll upward until only the whites are showing, which creates an impression of ecstasy or trance. In fact, both in their music and dance the Kandyan dances seem to reflect an ecstatic quality that is characteristic of many trance rituals.

The technique includes several specialities, such as acrobatics and the handling of the approximately two-metre red cloth strip fastened to the dancer’s tiara-like headgear. By means of controlled head movements the dancer is able to whirl the long strip in the air and regulate its movements according to the rhythm of these climatic dance sequences.

The Kandyan dances have a rich repertoire. They have been an integral part of the Kandy Perahera procession since the early 20th century, and thus many of the dances have a procession-like quality. Like many of the Sri Lanka dances, Kandyan dances can also easily be performed as part of a procession, which freely moves along streets or the grounds of temples. This is partly possible because the drummers are also able to dance. 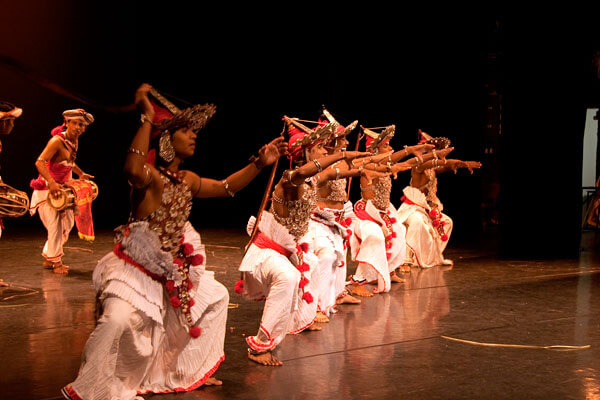 The dance technique allows some freedom for the dancers in the most energetic sequences Jukka O. Miettinen

Possibly the most archaic of the dances, such as the opening invocation, derive from the above mentioned kohomba kankariya village ritual. The vannams, also mentioned above, which possibly derive from the Kandyan period, have a literary content, because they, in an extremely stylised way, illustrate Hindu and, particularly, Buddhist themes. Their movements, however, also echo ancient animal movements.

Many of the dances end with dynamic, climatic finales Jukka O. Miettinen

The vannam dances have their own structure. They start with tanama, a musical arrangement for drummers and cymbal players, in which the musicians sing a few syllables. In matra the dancers start to move in various directions and in circles; they also start to jump and whirl. In kastirama the movement becomes even faster and complex, while the adauwa section includes leaps, spins and static poses. The climatic finale is provided by the sirumanam.

Nowadays, the masculine Kandyan dance technique has also been adapted for female dancers and it has served as a basis for new creations.

The ves costume, the common dance costume for most of the Kandyan dances, consists of a large white loincloth, which is wrapped to form a kind of pair of loose trousers. The upper body is bare, except the large breast ornament, a kind of beaded net, constructed of small seashells and silver beads. The arm and shoulder decorations are also made of silver, like the impressive tiara-like headgear with its large ear ornaments.

According to studies on visual sources, it is believed that the outfit was simpler in older times. In the earliest relief showing a Kandyan dancer, the tiara was in the form of a naga snake. Now the tiara has seven protruding “leaves” or “flames”. It was during the two last centuries that the outfit gradually got its present, spectacular shape.

The costume with its ornaments was originally regarded as sacred and kept in a temple. There are still many magical beliefs connected to it. The ves crown, in particular, has been venerated and until rather recent times a dancer was allowed to wear it only after a ceremony (ves mangalya) in which he was initiated and blessed as a mature dancer.