The person who is honoured to be the “founder of modern dance” in India did not originally have any kind of background in dance. Uday Shankar (1900–77), the older brother of the musician Ravi Shankar, belonged to a Rajasthani family with origins in what is now Bangladesh. He was originally interested in painting. 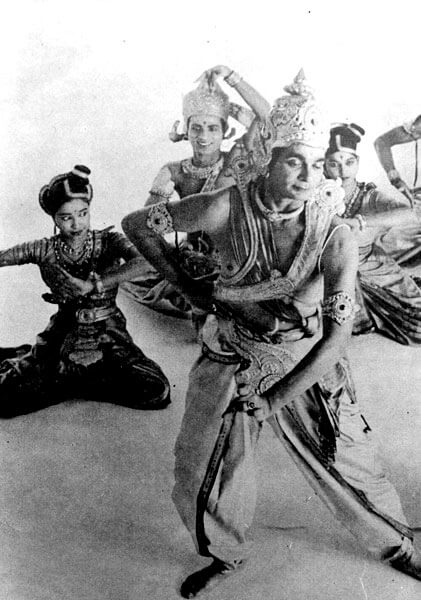 For a while he studied law before he became an amateur impresario. In 1920 he went to London to study at the Royal College of Art. It was the period of “Orientalism” in Europe. Anything that was thought to have something to do with the “Exotic East” was highly fashionable.

Uday Shankar performed as an “Indian dancer” at one of the charity events organised by his father in London. Among the spectators was also Anna Pavlova (1882–1931), the most famous Russian ballerina of the time. Pavlova also had ambitions to create her own orientalistic choreographies and she chose Uday Shankar to be her partner.

Their co-production, the Krishna-Radha ballet, had a highly successful première at the Royal Opera House, Covent Garden, in 1923. Later they also produced the ballets Ajanta Frescoes and Oriental Impressions.

In Europe and in America Uday Shankar first of all embraced the prevalent Western stage aesthetics with all the possibilities of stage décor and electric lighting. He worked very much along the same lines as did the Western artists trying to capture the romantic conception of Oriental Mysticism in their creations. They included, among many others, Ruth Saint Denis, La Meri, and the most famous of them all, the notorious Mata Hari.

Uday Shankar was a celebrity when he returned to India in 1927. He went back to Europe in 1937 and founded Europe’s first Indian dance troupe in Paris. At the same time as Diaghilev’s Ballets Russes and Rolf de Maré’s Ballet Suédois toured the world with repertoires including oriental numbers, Uday Shankar performed seven years throughout Europe and America with his group called Uday Shankar and his Hindo Ballet.

In 1960 Uday Shankar settled in Calkutta, where he established his Uday Shankar Centre of Dance in 1965. His influence can be mainly recognised in the spread of the conception of Indian Ballet, in which various Indian systems of movement are adapted to Western stage aesthetics. His only dance film Kalpana or Imagination (1948) is, however, in its brave expressionistic style, a remarkable attempt to combine dance, visual arts and film.