The Cambodian lakhon khol (also lakhon khaol or lakhon bhani) is clearly a sister form of Thailand’s khon mask-theatre. They both illustrate mainly the localised versions of the Indian epic Ramayana, which is known in Cambodia as the Reamker and in Thailand as the Ramakien. They are both regarded as national epics in their respective countries and they are closely linked to the royal courts and the god-king cult.

The Thai khon has already been discussed earlier. Like khon, lakhon khol can also involve over a hundred actors, a percussion-dominated orchestra, narrators, singers, and a chorus. Both khon and lakhon khol employ decoratively painted and gilded papier maché masks covering the whole heads of the dancers who enact the demon and monkey roles. In Cambodia, however, the old practice of also covering the heads of heroes and heroines is also still sometimes followed.

The styles of the Cambodian and Thai masks are clearly related, although the lakhon khol masks are more robust in style nowadays. The lakhon khol dancers’ costumes are similarly related to the dance costuming of the Thai style that King Sisowath (1904–1927) had already adopted for his own court dancers. 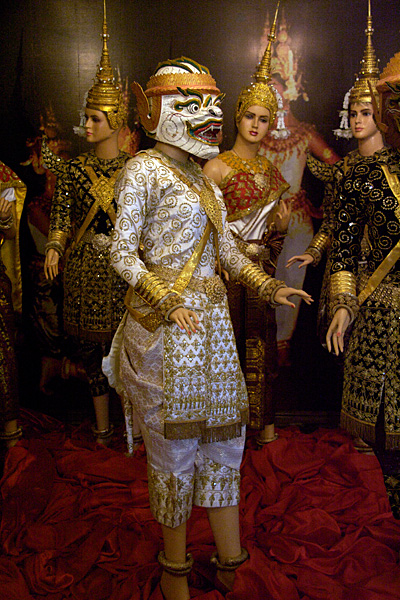 Lakhon kol costumes and masks in the collection of the Grand Palace in Phnom Penh Jukka O. Miettinen

Lakhon khol employs all the sub-techniques of Thai-influenced Cambodian classical dance. The heroes and heroines must have full command of the classical technique, while the monkey characters imitate animal movements and the demon characters have a martial arts-influenced technique of their own characterised by the turned-out leg position.

From the Court to the Village

It is generally believed that King Ang Duong (1796–1859) already had an all-male lakhon khol troupe among his court dancers. It is believed that after his death it dissolved and later became reconstituted in a village context. It is indeed a rare example of how a court tradition has been transplanted into village surroundings in the whole region of Mainland Southeast Asia. The village dancers were, from time to time, even invited to perform at the court.

Before the beginning of the long period of political unrest and wars at the beginning of the 1970s there existed as many as eight village lakhon khol troupes in Cambodia. When the country was, and still is, recovering from its hardships it seems that only one of these groups has survived the wars. It is the troupe that is active in the village of Svay Andet, across the Mekong River from Phnom Penh.

The Svay Andet group has usually performed during important festivals such as the New Year celebration in mid-April. The performances have retained their deep ritual and even magical functions. The performers are ordinary villagers, farmers etc., and the performances, often lasting several nights, usually involve numerous members of the community.

Although the basic conception of the Svay Andet lakhon khol originally stems from the court tradition, there are clear differences between it and the present court lakhon khol. As an all-male troupe the Svay Andet group concentrates more on the battle scenes and thus on the role categories of the monkeys and demons. 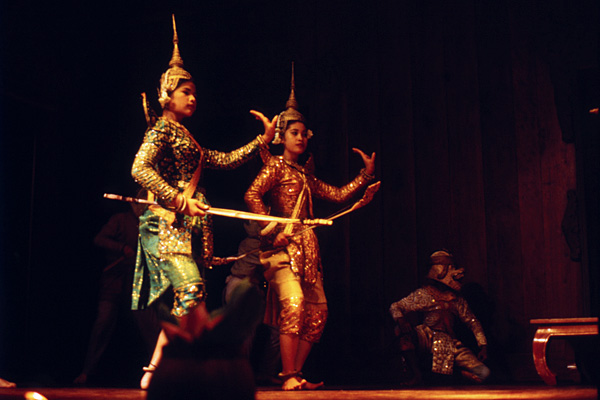 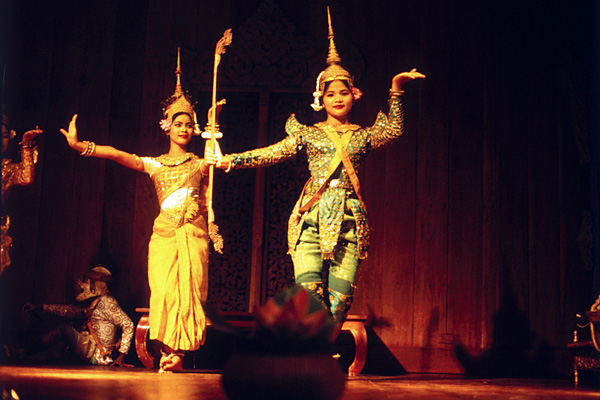 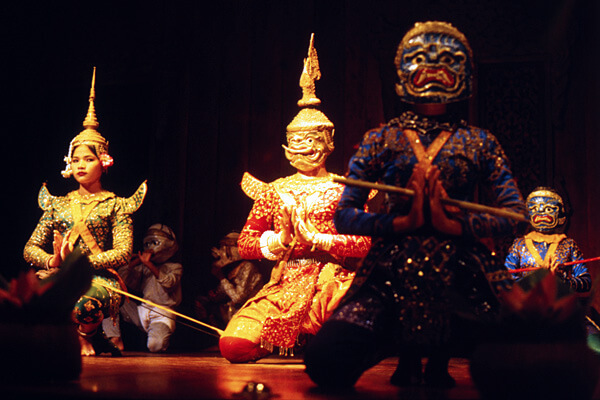 In the 20th century several attempts have been made to remodel lakhon khol for modern times and for foreign audiences. The epic Reamker was originally never, or at least very rarely, staged as a whole. Now, however, it is customary to stage productions which cover its main episodes. These kinds of productions may last several hours or they may be reduced to much shorter performances aimed for tourist variety shows.

In the 1980s and 1990s the University of Fine Arts created a kind of a reconstruction of an old-type lakhon khol with an all-male cast, all of them wearing masks. However, now it is also customary to stage it with a mixed cast while the main heroes, Preah Ream (Rama) and Preah Lek (Laksmana), are impersonated by female dancers. One of the reasons for this may be a lack of male dancers. This is understandable after the long period of war, which severely reduced the population of Cambodia.